Football: What we saw in Week 2
Tweet
Thurston ends Sheldon's reign over Eugene; Lakeridge rebounds strong from loss; 3A Siuslaw breaks through; 1A Elgin on the move
September 14, 2019 by Jerry Ulmer, OSAAtoday 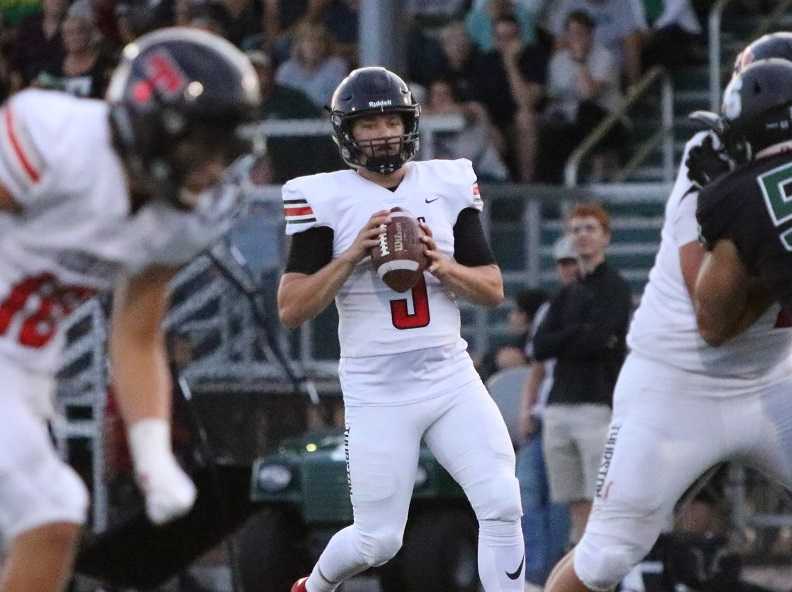 For nearly two decades, Sheldon’s football team has been the 800-pound gorilla of the Eugene area, tossing opponents aside with relative ease.

So Friday night, when top-ranked and reigning 5A champion Thurston of Springfield emerged from the Irish’s home turf with a 34-19 win, it sent shockwaves through the state.

Sheldon – No. 5 in the OSAAtoday 6A coaches poll -- had not lost to a Eugene area team since falling to Churchill and Willamette in the 2000 season, a string of 65 consecutive wins. The Irish had won 17 in a row over Thurston dating to 1998.

“It’s a monkey off our back, for sure,” said Colts coach Justin Starck, who was 0-for-12 against Sheldon. “No one in Lane County has been able to beat these guys for a long time. So to be able to get that one out of the way, and pull that off is big. It was relief as much as it was joy.”

It was no fluke. Thurston led 20-3 at half, and if not for two wasted opportunities inside Sheldon’s 5-yard line, it could have been 34-3. The Colts finished with 542 total yards, averaging 8.3 yards per play.

Senior quarterback Cade Crist completed 25 of 33 passes for 328 yards and four touchdowns, two to senior Santino Stranieri. Senior Wesley Kommer ran for 159 yards and one touchdown, a 41-yard burst with 3:28 left that sealed the win.

It was much different than last season, when Thurston lost at home to Sheldon 58-7.

“This is a special group of kids,” Starck said. “We’ve had years where we thought we could compete with them and we’d wind up losing by 30. We thought we’d be in great shape last year, and then Cade Crist pulled his hamstring and wasn’t able to play, and the wheels fell off. Once again this year, we really felt more than ever that we matched up really well.”

Sheldon (0-2) has one of the state’s best lines, but Thurston met the challenge head-on, holding the Irish to 37 rushing yards on 16 carries.

“We clearly showed that our kids up front, on both sides of the ball, are a very, very good group,” Starck said. “When you can win the battle at the line of scrimmage, you’ve got a good shot.”

Thurston, which blasted Churchill 55-0 in its opener, needs to refocus for another test Friday. The Colts go on the road to face No. 2 Crater (2-0).

“We’ve gotten to the point as a program where we relish these types of games,” Starck said. “These are fun for us. These motivate us. These bring out the best in us.”

Perhaps the best rebound performance of Week 2 goes to Lakeridge, which followed a 53-7 opening loss to No. 4 Tualatin with a stunning 41-28 road win over No. 8 Clackamas.

First-year Pacers coach Forrest Sherman said much of the about-face had to do with mental preparation.

“The biggest difference is getting one out of the way, calming our nerves a little bit, not feeling so much pressure to go out and be great,” he said. “Our kids just played with a chip, honestly, but it was more of a, ‘We know what we’re capable of.’”

If anyone needed a reminder of what tailback Jalen John could do, he provided it against Clackamas. The Arizona-bound senior rushed for 330 yards and three touchdowns on 27 carries and caught a scoring pass.

“I tell everybody, Gale Sayers used to say, ‘I only need 18 inches of daylight,’ and Jalen’s that same kind of back at the high school level,” Sherman said. “Our offensive line stays on their blocks for a split second, if that guy gets a crack, he’s in the secondary, and he’s hard to deal with.”

Still, John’s yardage total is only No. 2 in his career. As a freshman at Aloha, he ran for 348 yards and four touchdowns in one game.

In his second game as a head coach Friday, Tigard’s John Kemper found himself looking across the field at one of the biggest influences on his life, Barlow coach Terry Summerfield.

Kemper played for Summerfield at Barlow, where he graduated in 2003.

“He was one of the main reasons that I wanted to get into teaching and coaching early on,” Kemper said. “I’ve been very fortunate to have him as a mentor and a role model.”

Kemper’s older brothers – Mike and Dan – played at Centennial in the 1990s. Kemper attended Centennial schools until the ninth grade, when he decided to go live with his father in the Barlow district.

“I felt like I needed to make a change for myself,” Kemper said. “I wasn’t necessarily going down the best path.”

“His family went camping every summer, and a few of us players would always go out for a couple days and go camping out on his boat with him,” Kemper said.

When Kemper, who coached Tigard’s offensive line for 10 seasons, decided to apply for the head coaching job after the resignation of Craig Ruecker, he sought Summerfield’s advice.

“I went out to his house and we talked for probably three hours on different things,” Kemper said.

As for the game, Tigard beat Barlow 35-3 with a stout defense that allowed 112 yards and got an interception return for a touchdown by senior Max Lenzy. The Tigers are 4-0 against the Bruins in the last three seasons, including playoff wins in 2017 and 2018.

“I think it was a little more emotional for me the first time we played them in the playoffs,” Kemper said. “But it definitely was emotional, being the head coach now and having someone across from you who’s still a good friend and mentor.”

Down 19-0 at half Friday at Philomath, 3A Siuslaw was staring at its 10th consecutive loss.

But the Vikings turned the tables in the second half to beat the Warriors 28-19, their first win since defeating Brookings-Harbor 31-26 in the 2017 finale, which staved off a winless season.

"At halftime, we realized we didn't do anything right in that first half and we were still in a ball game," first-year Vikings coach Sam Johnson told ExplodingWhaleSports.com. "We were able to put up four scores quick. That's what we do as a team."

Siuslaw (1-1) scored three touchdowns in the third quarter to take a 20-19 lead. Braydon Thornton caught touchdown passes of 16 yards from Elijah Blankenship and eight yards from Camp Lacouture and Hector Garcia scored on a one-yard run.

Blankenship hit Brady Libby with a nine-yard touchdown pass early in the fourth quarter to push the lead to 28-19. The Vikings held on an avenged a 33-8 loss to Philomath last year.

The win was a breakthrough for Johnson, 23, who was an all-league receiver and defensive back for Siuslaw. During his four years in the program, the team went 38-6.

“The kids, they're 100 percent winners," Johnson said. "We put people on notice: This gold helmet, we said it, it used to be feared. … But the last three years it's been a joke. People are going to fear it now."

After five years of playing an independent schedule, 1A Elgin has made significant gains in the past two seasons.

The Huskies went 5-5 last year, losing in the first round of the state playoffs, and have shot out of the gate this season with two impressive wins, 58-20 over rival Imbler and an 87-0 blasting of Cove on Friday.

“We knew coming back we were going to have a pretty decent team,” said coach Jeff Rysdam, whose team is No. 7 in the OSAAtoday 1A coaches poll.

Elgin, formerly of the 2A Blue Mountain Conference, began playing an eight-man independent schedule in 2013 due to a shortage of players. The program stabilized as the team went 25-15 in five independent seasons.

“Our program was in disarray, so we had to rebuild it,” said Rysdam, a 1996 Elgin graduate. “It was about to go under. We went independent and started to win again, and slowly but surely we got kids back out.”

The Huskies have 22 players on their roster, the most in Rysdam’s eight seasons in the program. They have lots of experience, too, with starters back at all but four positions.

Elgin couldn’t wait for its opener so it could avenge last season’s 32-26 loss to Imbler. The Huskies got their payback.

“That’s a game we circled,” Rysdam said. “We knew our very first game, if we were going to accomplish our goals, we have got to beat Imbler. I’ve never seen, in my eight years here, kids so motivated.”

Elgin has a fourth-year starter at quarterback in Tristan Simpson, who has accounted for nine touchdowns in two games, and a big line that features junior Dawson Larman (5-11, 220) and seniors Deshaun Trudeau (6-1, 205) and Josh Redick (5-5, 220).

They also have two impact newcomers in senior receiver Jordan Palmer (10 catches, 248 yards, three touchdowns), who did not play his first three seasons due to a rare blood disorder, and freshman linebacker Joe Lathrop (14 solo tackles vs. Imbler).

The team is just happy to have a chance to make the playoffs.

“During those five years we were independent, we had some pretty good teams, but we had nothing to show for that,” Rysdam said.

“These next three weeks are going to define our season,” Rysdam said.

A glance at other games around the state: