Football: Joseph’s run in six-man football changing everything
Tweet
The Eagles are 11-0 since joining the OSAA pilot program in 2018 and helping to build community pride once more
October 14, 2019 by John Tawa, OSAAtoday 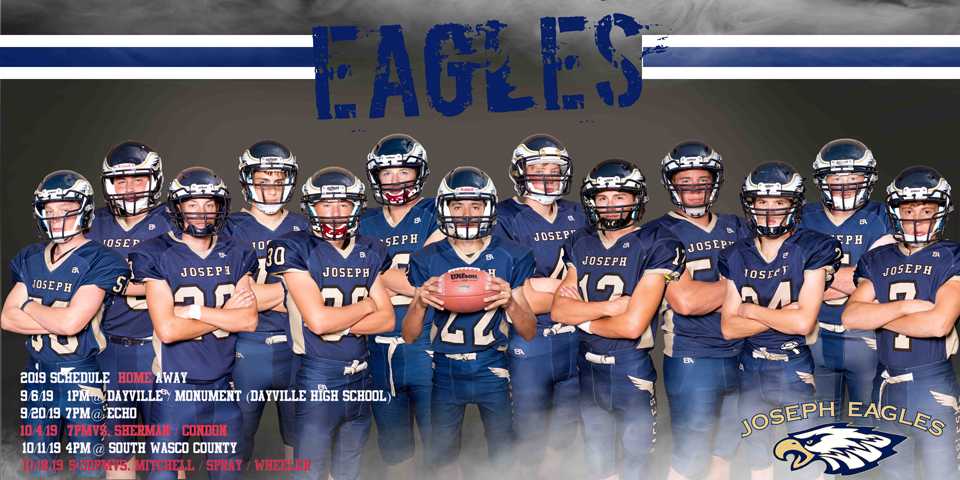 Midway through the second year of a two-year pilot program, six-man football is being credited with infusing life into small football communities all over Oregon.

Six-man football is played in Oregon on a field that’s 100 yards long and 40 yards wide. Played by 15 schools across the state, it is reserved for schools with adjusted enrollments of 89 students or fewer. Most six-man teams have between eight and 15 players total. The rules are different -- every player is eligible to catch a pass, you need 15 yards for a first down and the person receiving the center snap cannot run – but it remains fundamentally football.

“The players love the game,” said Walker. “My players were skeptical at first last year, but when we started getting into the season things completely changed. Our players would rather stay six-man forever now. When a normal lineman knows he can catch a pass now since it’s six-man, his eyes will light up with pure excitement. The game is way more intense and high paced.”

Last Friday, two of the state’s remaining three unbeaten six-man teams squared off, with Joseph edging South Wasco County, 25-13, in a low-scoring affair, unusual in a variant of football commonly described as “basketball on grass.” The Eagles are now 11-0 since turning to the six-man game.

We asked Joseph head coach Duncan Christman questions about six-man football and its impact on the team, the school and community.

Duncan Christman: Joseph was not a 1A power in the 8-man game. It had been awhile since there was a winning season at the 8-man level, and the best season I believe was in ‘09 when they lost in the Championship game against Imbler.

OSAAtoday: Why make the move to 6-man?

Christman: The amount of students in our school prompted the switch to 6-man. We did not think that we could compete at the 8-man level with the amount of students we had coming out for football. Safety was also a concern, as we did not have a lot of size on our team. We looked at it as a ‘win-win’ because if we liked it at the end of the two-year pilot program, we would stay, and if we did not, we would just fall back into 8-man.

OSAAtoday: In what ways has it benefited the program to play 6-man?

Christman: It gives all the students a chance to highlight their individual skills better. Many of the matchups are one-on-one in the open field, so it does a good job of that. There has also been a lot less injuries since we started. There are less players on the field, which makes sure that no one is being blindsided by a hit or really targeted by another player.

OSAAtoday: Some coaches say 6-man has saved football in small districts? Do you agree?

Christman: Oh absolutely. If we did not make the switch, we would have had a dismal 8-man season and, honestly, probably not had football in the next few years. We have trouble getting students out to play. Our teams used to field 20-30 players a season; now we are lucky if we get ten to thirteen. It offered our school a chance to continue football, and that is something we are not going to waste.

OSAAtoday: Is the benefit to playing 6-man just in the personnel needed to field a team or are there other advantages?

Christman: There are other advantages to 6-man football, but the main one is personnel. As I stated earlier, we cannot field teams as we used to. So giving the ten or thirteen kids we get out the chance to play is super beneficial. Safety is another benefit. You run the risk of concussions like any other sport, but in the two seasons we have played so far, we have not had any dramatic tears or breaks. It might be because of the conditioning we do, but it is less likely to happen now. In addition, the biggest benefit is that it gave us a chance. It allowed us to find our niche in the football world. As big as 6-man is in Texas and Montana, it has given all of us small schools a chance.

OSAAtoday: How has Joseph's 6-man success raised morale among the players? At the school? In the community?

Christman: It gave them back confidence. It raised spirits to the point that they all felt like no one could stop them. It gave them their winning mentality back, something that had been missing from the students for a while when it came to football. It made them proud to be a part of the team. We have done a better job creating unity with our school and other sports because of football. We all actively want to support each other now. It is a contagious feeling when you start winning and want nothing but the best for everyone else, too. We have a ton of community support now, too. The community members actively want to support and be a part of what we have created here. The only downside is getting people to realize that 6-man football is REAL football. I still have many old timers tell me it is not real football. Until they come see a game, see how hard our students play, and see how hard they hit and run, it will not change.

OSAAtoday: Do you expect 6-man to grow in numbers in Oregon?

Christman: I do expect 6-man to grow in numbers. Even now, we are having 1A and 2A schools that play 8-man that are having trouble fielding teams. 6-man football is the way to save the schools that have students willing to play and the drive to continue football. There is talk that the OSAA wants to go to a 6-man, 9-man, and 11-man football, but I do not see the benefit in the 9-man game. Adding one more player is only going to make it tougher for schools to have a team that are already struggling to get players. I think that establishing it so if you meet the enrollment qualifications, you could play 6-man, keep 8-man for those 2A-3A schools that meet the qualifications, and keep 11-man for the 4A-6A teams. It is going to become the future of football for many small schools across the state and country.