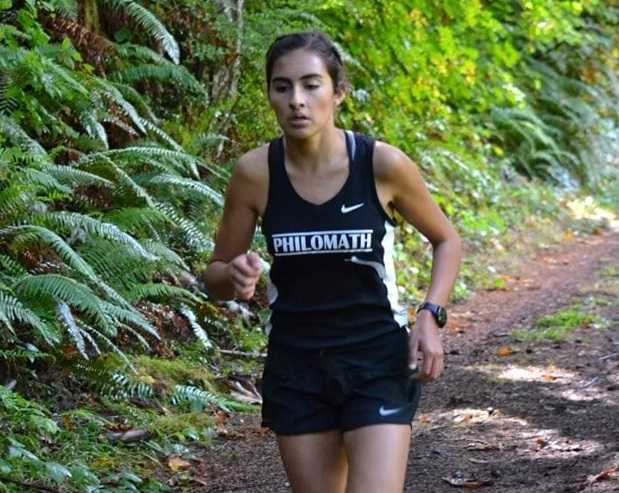 In what may have been a preview of next month's 4A state championship meet, the Philomath boys and Marist Catholic girls ran to impressive victories at the Paul Mariman Invitational on Saturday in Philomath.

Running on his home ground, freshman Brody Bushnell led four Warriors into the top 13 on the 5,000-meter course at the school, located west of Corvallis.

Philomath, No. 2 in the OSAAtoday 4A coaches poll, scored 59 points. Sisters, led by the 1-3 finish of juniors John Peckham (16:17.8) and Will Thorsett, finished second with 70 points. Siuslaw, which its No. 5 runner across the finish line before any other team (21st), finished third with 83 points. And Marist Catholic, which came into the weekend ranked No. 1, scored 98 points for fourth.

On the girls side, Marist Catholic's lead quartet went 4-5-6-8 to power the team to the title with 37 points. Senior Hannah Rannow, who was second overall, led Siuslaw to second place with 52 points.

Senior Hannah Hernandez of Philomath improved her time by 30 seconds from 2018 and won the girls race in 18:28.7. The Warriors placed third with 81 points.

At the Champoeg Invitational last Friday, defending 5A girls champion Hood River Valley fended off a challenge from North Salem in a key matchup, 55-76.

The Dalles (77) outlasted Columbia Gorge neighbor Hood River Valley (80) to win the boys team title as the two teams combined to put five of the first seven runners across the finish line. Hood River Valley's Omar Quintana won the race in 16:15.4 and The Dalles went 2-3 with Friedrich Stelzer and Juan Diego Contreras.

Up north, at the Hole in the Wall Invitational in Lakewood, Wash., Jesuit edged Lincoln 86-87 for the girls title as the two Oregon schools finished well ahead of regionally ranked North Central of Spokane.

Lincoln freshman Kate Peters stormed into the lead and dominated the second half of the race, winning in 16:58.7 -- the fastest 5K by an Oregon girl this fall. It was the first sub-17 clocking since 2015 when Ella Donaghu ran 16:46.7 at the Sundodger Invitational in Seattle.

The Jesuit boys, ranked 14th nationally, also enjoyed a big day at Hole in the Wall. The Crusaders split 15 seconds on their five scorers, led by Declan O'Scannlain's ninth-place finish in 15:33.9. Jesuit scored 72 points to beat Washington schools Bishop Blanchet (110), Tahoma (138) and Camas (153) amid a field of 52 teams.

At the Southern Oregon Invitational at the Valley of the Rogue State Park, Madison Elmore of South Eugene sped to victory in the girls varsity race in 17:46.4 -- winning by nearly 40 seconds. The Axe collected five of the next six places and sewed up the team title with 19 points.

Crescent Valley sophomore Blake Byer won the boys race in 15:58.1 and led the Raiders to an impressive 35 points for a victory over second-place South Eugene (59).