Girls Soccer: Nov. 5 playoff results and recaps
Tweet
Who won in Tuesday's Second Round for 6A and First Round for 5A, 4A and 3A/2A/1A?
November 5, 2019 by John Tawa, OSAAtoday 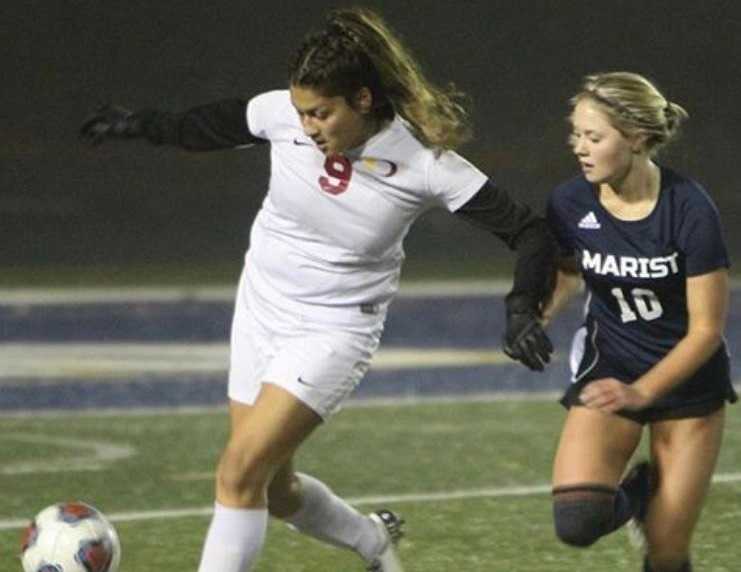 See below for girls soccer results and highlights from Tuesday’s playoff action in all classifications. We will add more highlights as we receive them. Coaches may email results and details to [email protected].

The quarterfinals are on Saturday.

Jesuit 7, Sheldon 0 – The top-seeded Crusaders scored five times in the first half and never looked back at home. Callan Harrington tallied twice before the break for Jesuit and once more to cap the scoring. Taylor Kruger, Madi Koleno, Mia Gish and Naomi Alvarez also scored for the Crusaders, who are 16-0-1 on the season.

Barlow 2, St. Mary’s Acad. 0 -- Abi Hoffman and Mikayla Topaum found the net for the Bruins in the win over the Blues.

West Salem 2, Wilson 0 -- Fatima Jimenez and Jillian Huhn scored Titan goals, one in each half, in the foggy home win.

Mountainside 5, Cleveland 0 – Emma Weber scored in the fourth minute for the Mavericks, who then withstood a lot of Cleveland pressure. Two late first-half goals, one each by Nedya Sawan and Kyla Williams, helped Mountainside relax and play loose the rest of the match. Sawan finished with two goals for the victors.

West Linn 1, Grant 0 -- The Lions made a first-half goal from Rosie Larsen hold up in the home win.

Tualatin 2, Lakeridge 1 -- Cally Togiai scored on a shot across the goal to the lower right post in the first half and Taylor Morgan added a goal in the second half to propel the Timberwolves past the Pacers.

South Eugene 3, Lincoln 2 (O.T.) -- Devyn Simmons forced overtime with a goal in the final minute of regulation, then got the game-winner with six minutes left in the second overtime, off an assist from Sahve Beller. Bri Alvarez had seven saves for the Axe.

Crescent Valley 8, The Dalles / Dufur 0 --The top-seeded and reigning state champion Raiders scored five goals in the first half to pull away. Seven players scored for Crescent Valley, which got two goals from junior Anna McClave.

Willamette 5, Ridgeview 1 -- Freshman Selena Gallacher scored just 22 seconds into the match for Ridgeview, but Willamette scored the equalizer four minutes later and poured it on in the second half to pull away on the road.

Scappoose 2, Springfield 0 – The Indians led in possession, won the majority of the 50/50 balls and scored once in each half to advance. Grace Negelspach had a goal and an assist in the contest. She set up Tessa Davidson in the first half and whirled and scored with a left foot to the upper corner in the second.

North Eugene 4, Putnam 0 -- Abbey Sellars scored four goals for the Highlanders, two in each half. The Kingsmen did not have a shot on goal.

Churchill 2, Silverton 1 -- Emmi Freeman and Sophia Matthews scored first-half goals for the Lancers and held on for the 2-1 win.

Corvallis 1, Hillsboro 0 -- Sophomore Natalie Boragine scored late in the first half to propel the Spartans into the quarterfinals.

Woodburn 1, Valley Catholic 0 -- A Woodburn goal with 12 minutes left broke a scoreless tie with the Valiants.

North Marion 3, Stayton 2 (O.T.) -- Mya Hammack scored on a penalty kick with 10 seconds remaining in the second overtime to pull out the win.

Marist Catholic 8, Ontario 0 -- Abbie Chambers had four goals and an assist as the Spartans rolled past the Tigers. Whitney Korth added two goals and Kallie Harding and Anna Watts had single goals for Marist Catholic.

La Grande 3, Molalla 1 – Audrey Garlitz scored all three goals for the victors, including an insurance tally with 10 minutes left in the match. Goalkeeper Alexyss Chamberlain was impressive in the win for the Tigers, especially in the second half when it was anybody’s game.

North Valley 3, Cottage Grove 0 -- North Valley put two on the board in the first half and went on to the shutout win.

Catlin Gabel 8, Umatilla 0 --The Eagles scored seven first half goals on their way to victory. Kendrick Dahlin had a hat trick in the first half. Caroline Cook, Sophie Wand, Grace Mueller, Ann Louise Naito and Claire Williams also scored for Catlin Gabel, whose back line limited Umatilla to one shot on the night.

Riverside 2, Cascade Christian 1 (O.T.) – Cascade scored first but Riverside tied the contest two minutes into the second half on a Neftali Pacheco tally. The game remained tied after regulation and eight minutes into overtime before Marisol Pacheco scored to give the Pirates the winning margin.

Santiam Christian 1, Douglas 0 -- The Eagles remained unbeaten as Audrey Miller scored on a free kick in the 77th minute.

Yamhill-Carlton 2, Westside Christian 1 (O.T.) – Aliya Seibel scored in overtime to give the Tigers the win. Lisie Luttrell scored the other goal for Y-C.

Oregon Episcopal School 4, Lakeview 1 – The Aardvarks built a 3-1 halftime lead on the strength of two goals from Wylly Wilmott and one from Nadia Schwartz and went on to the win. Freshman Savannah Greenfield scored Lakeview’s lone goal, which gave the Honkers the early lead.

St. Mary’s, Medford 3, Dayton 1 – Sophomore Ryker Rothfus netted all three goals for the Crusaders in the win. Her first score came in the fourth minute off of a give-and-go with Sophia Dobry. Four minutes later, Rothfus banged home a deflection of a Stella Olson shot. Keiley Myers scored in the first half for Dayton to close the gap and there was no further scoring until late in the match when Rothfus’ third gave St. Mary’s the insurance it needed.