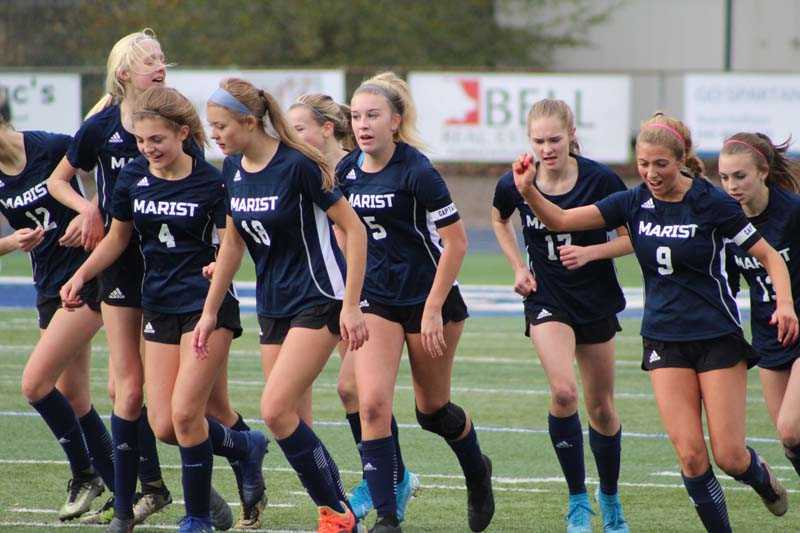 Marist Catholic pitched a shutout to reach the semifinals. Photo by Kevin Cave

See below for results and highlights from all the Saturday semifinal playoff matches in girls soccer. We will add more highlights as we receive them.

Jesuit 4, Barlow 0 -- Callan Harrington scored twice in the first half and completed the hat trick in the 70th minute for the Crusaders, who got one more goal in the 77th minute from Lucie Rokos in the shutout win.

West Salem 2, Sherwood 1 -- Paige Alexander scored with 50 second remaining to lead the Titans to the win. Alexander also scored the first goal on a penalty kick in the first half.

Mountainside 2, West Linn 0 – Nedya Sawan tallied for the Mavericks seven minutes into a hard-fought match whose outcome was in doubt until Nina Rhode scored the insurance tally with one second left.

South Eugene 3, Tualatin 1 – The Axe scored two first-half goals, on a curling corner kick by Evelyn Trammell two minutes in and on a Devyn Simmons header off of another Trammell corner 16 minutes later. Tualatin cut the lead in half five minutes after the break, but South Eugene salted away the win when Sahve Beller scored with five minutes remaining off of passes from Simmons and Haley Sherrill.

Crescent Valley 2, Willamette 0 -- The defending 5A champion Raiders generated numerous score chances but only broke through in the second half when Ana McClave scored off of a Meredith Merten cross. Kaiya Leamy iced the game later in the half on an assist by Nicole Huang.

North Eugene 2, Scappoose 0 – Scappoose had the better of the play, outshooting North Eugene 8-2 in a scoreless first half. The Highlanders broke the tie in the 50th minute, when Abbey Sellars flicked an Avery Wormdahl corner to Reice Newell, who put the ball in the back of the net. North Eugene scored again eight minutes later on a powerful strike from senior Sophie Cleland.

Marist Catholic 2, Philomath 0 – The Spartans scored twice in the final 10 minutes of the match to break the stalemate. Senior captain Kallie Harding scored first by one-timing a cannon into the upper left corner of the net. Eight minutes later, junior forward Abbie Chambers scored on a highlight reel header off of a corner kick from senior captain Ella Coulombe. Chambers outjumped two defenders to win the header, which found the upper right corner of the net. “This was a very, very physical game from start to finish,” said Marist coach Stefan Schroffner. “Give credit to Philomath who tried to take us off of our game with their physical play and continuously booting long high balls into our defense and running at us. It was difficult to play against their ‘boot-n-run’ style of play but in end, we settled down in the 2nd half and broke them down with our skill and possession and finally finished them off with two well-earned goals. A ton of credit goes to our defense which I think are the unsung heroes of our season so far. They worked tirelessly today, played as a complete unit, and dealt with everything that came their way. We’ll take the shutout win.”

Catlin Gabel 5, Riverside 0 -- Catlin Gabel put the game away early with four first-half goals. Thea Traw scored in the ninth minute off a corner from Ann Louise Naito, who added a goal six minutes later on a direct free kick. Annika Holiday and Caroline Cook both scored late in the half for the Eagles, with each assisting on the other's goal. Claire Williams scored early in the second half off of a corner kick.

Yamhill-Carlton 3, Santiam Christian 0 -- Elisabeth Lie scored twice in the first half for the Tigers, who advanced to the semifinals for the first time in school history.

St. Mary’s, Medford 1, Portland Christian 0 -- Junior Sophia Dobry finished well in the seventh minute after sophomore Ryker Rothfus collected the ball at the 18, turned, and played a through ball to her teammate. St. Mary’s had numerous other chances by could not capitalize. The Crusaders played terrific defense, leaving Portland Christian only long-range shots on goal that never threatened the back of the net.