Volleyball: St. Paul sweeps No. 1 Powder Valley in 1A final
Tweet
In a repeat of last year, the Buckaroos beat the Badgers in the championship match
November 9, 2019 by Nathan Shaw, OSAAtoday 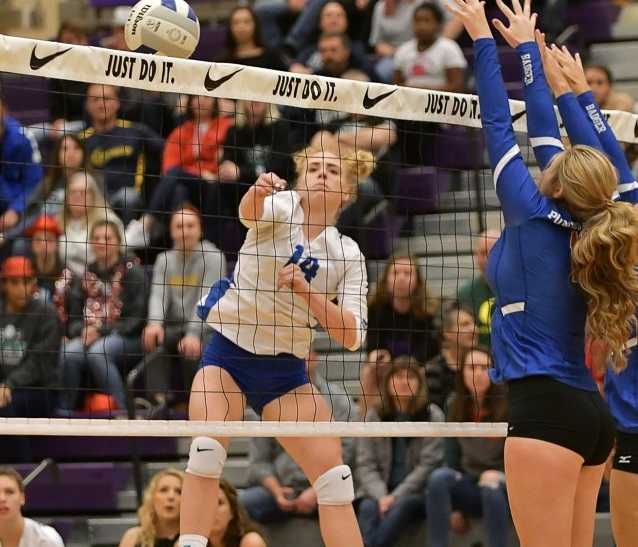 St. Paul's Isabelle Wyss had 18 kills in the final against Powder Valley. (Photo by Andre Panse)

REDMOND -- For the second year in a row, St. Paul has defeated Powder Valley for the 1A volleyball title.

The Buckaroos beat the Badgers 25-13, 25-14, 25-16 in the final of the OSAA/OnPoint Community Credit Union state tournament Saturday at Ridgeview High School.

Isabelle Wyss had 18 kills, Erin Counts added 10 kills and several blocks and Destiny Smith contributed 14 digs for No. 3 seed St. Paul (29-5) in the win over the top-seeded Badgers (34-2), who had their 26-match winning streak snapped.

The Buckaroos returned nearly intact from last season, except for a replacement at libero in Smith, who worked to make a smooth transition for her teammates.

“Trust among the team is really important,” Smith said. “Everyone has to have a feel of the team when passing and know who can get what ball. I just worked with the team knowing that together, we could all do it.”

St. Paul entered as the third seed in large part because of absorbing three losses at the Nike Tournament of Champions in Phoenix in early October. Buckaroos coach Lesli Hiller said the experience of playing the high level of competition was instrumental in their repeat title run.

“To see these girls rise up and play some of the best teams in the U.S to get here was amazing,” Hiller said. “I could not be more proud of them and our path to get here.”

The Badgers, whose only other loss this season was to 4A La Grande, came up short in their bid for their first title since 2012.