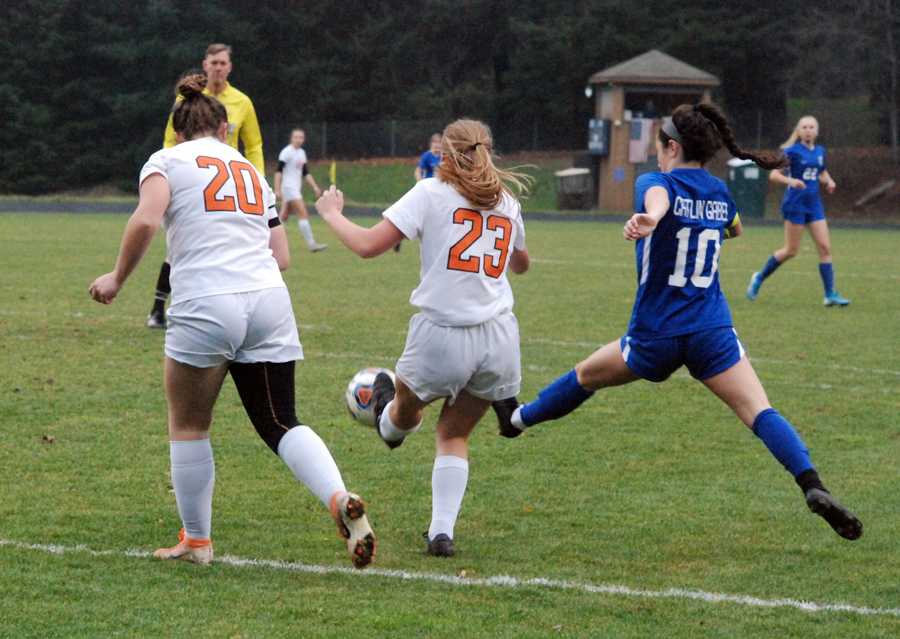 Catlin Gabel scored two goals in the first six minutes and led 5-0 at halftime of a 5-1 3A/2A/1A semifinal win over Yamhill-Carlton Tuesday afternoon in Portland.  The win gives the Eagles another opportunity to take down Oregon Episcopal School after the Aardvarks defeated St. Mary’s of Medford, 1-0, on the road in the other semifinal. OES defeated Catlin Gabel, 1-0, for the title last year and is on a run of six straight state titles, the last four over Catlin Gabel.

Early in the match, the play was fairly even and the action end to end. Catlin Gabel’s freshman keeper Macy Fry, who has been a part of 10 shutouts this season, including four straight heading into the match, was busy early but equal to the task.

Five minutes into the contest, Catlin Gabel struck first. Left wing Lola Diaz Gonzalez put the ball on her right foot near the corner of the box and sailed a perfect shot to the upper far post past helpless Tiger keeper Samantha Clements. One minute later, the Eagles struck again. Senior midfielder Ann Louise Naito celebrated her 18th birthday with a long-distance goal that eluded the fingertips of a leaping Clements in the cold, wet conditions.

Naito explained her goal this way: “I was going to pass with my left but I thought the girl was going to cut it off. I turned away from her to my right and shot it.”

Naito said that getting ahead early was a distinct goal for the match.

“We wanted to come out and make sure that they knew in the first 10 minutes that they didn’t have a chance,” she explained. “So we put as much pressure on as we could.”

With a two-goal cushion, Catlin Gabel turned up the heat the rest of the half, putting three more in the back of the net. Sophomore Kendrick Dahlin scored two of the goals, one off a nice assist from Annika Holliday; and assisted on the third for the Eagles, a goal from freshman Claire Williams in the 33rd minute.

Led by forward Caroline Cook, Catlin Gabel was as relentless offensively in the second half but could not get another past Clements. The senior keeper made some nice saves for Yamhill-Carlton and was aided by strong defense in front of her led by Hannah Vandewalle and Lisie Luttrell.

The best player for Y-C clearly was midfielder Elisabeth Lie. Lie was fast, strong and skilled playing the entire field. She created chances for teammates and for herself and could have scored three goals in the last 10 minutes of the match. Alas, she could only net one, a terrific effort where she dribbled around several defenders before beating Fry to her right from close range.

Catlin Gabel coach Chris Dorough said the key to victory, as it has been all season, was playing like a team.

“We’ve had a lot of talent recently but we haven’t necessarily been a good team together,” he explained. “We’ve been focused this year on unselfish play. I think some of our girls reflected that [tonight] with making the right pass. I feel like the group is tighter than it’s ever been and that’s reflecting in our play.”

With the semifinal win behind them, Eagle players and coaches can now devote their full attention to defending champion OES. Catlin Gabel defeated the Aardvarks twice during the regular season, just as it did a year ago before falling in the championship match for the fourth straight season.