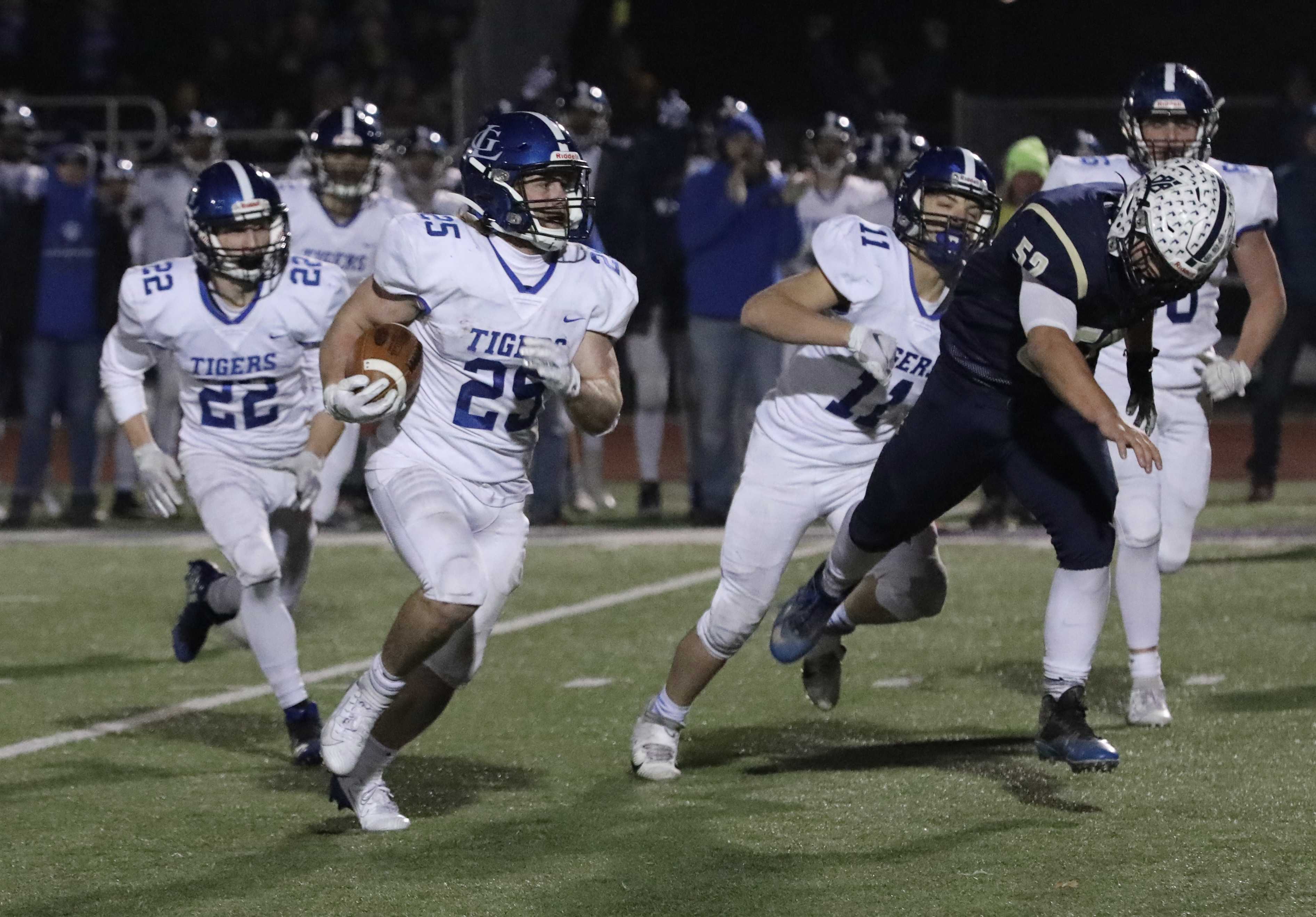 HERMISTON — There are no more questions for La Grande’s football Tigers to answer now.

The Tigers answered the last of them Saturday night with an 21-0 exclamation-point victory over No. 1 Banks in the OSAA/Online Community Credit Union 4A championship.

And to make sure nobody could ever think of it as a fluke, La Grande merely dominated one of Oregon’s best high school ongoing high school programs.

Tiger defenders took on one of the state’s best 4A offensive lines and stuffed the Braves’ running game at a measly 17 yards. They forced three fumbles and recovered two. They conceded 150 passing yards to Banks quarterback Tanner Shook, but they also intercepted two passes — one a 27-yard touchdown return by Nathan Reed.

And they buried Banks’ 22-game winning streak. They weren’t about to let a team from the greater Portland area come up the Columbia River and beat them in Eastern Oregon.

“No way, man,” said Tiger quarterback Parker Robinson, who threw two touchdown passes to pal Blaine Shaw and ran fearlessly into the teeth of the Banks defense for 62 yards. “We have worked so (ahem) hard for this, then to have them move the game to Hermiston, was great.

“We knew it would be cold. We knew we had the advantage.”

The temperature dived down to an arctic 22 degrees by the end of the game, but the Tigers were fresh and rocking right up to the final gun.

That’s the way they started the game, too. But the Braves were up for the fight early on. The two teams slammed into each other for a scoreless quarter, then the Tigers drew first blood with a 62-yard drive.

The drive included two critical face-mask calls against Banks that gave the Tigers 25 free yards, but when Robinson drove the team into the hot zone inside the Banks five, he knew what to do.

The Tigers faced a fourth-and-four, so Robinson went to Target No. 1 -- Shaw. Shaw ran a quick route in between two Braves and Robinson stuck the ball right in his hands for the touchdown.

“I was looking for him the whole way,” Robinson said.

There was still 3:41 left in the first half, which was enough time for Banks to get back into the game. And the Braves darn near did on their only drive into the red zone.

Shook hit four passes on the drive, and the Braves got another 15 for an unsportsmanlike conduct call on the Tigers. Suddenly, they had a first down on the La Grande 16, with plenty of time to tie the game.

We’ll never know. Shook hit his fifth pass, a bullet over the middle to Jarred Evans, but a couple of steps later a Tiger defender crashed into Evans and jarred the ball loose.

Another Tiger defender fell on it with 18 seconds to go.

The Braves never really recovered, and just to make it more difficult the Tigers scored again on their third play after halftime.

This was an open-field version of the first La Grande touchdown. Robinson, working from his own 35, stepped up into the pocket, pump-faked and was nearly buried by clawing Banks defenders.

But he saw Shaw crossing into a wide-open area underneath two Banks safeties and threw a perfect lead ball to him. Shaw caught it in stride, turned the corner and raced down to the right sideline to the end zone with 10:17 left in the third quarter.

“Yeah, I was looking for him on that one,” Robinson said. “I know all the patterns our guys run pretty well. I just had to do my best to get Blaine the ball.”

For his part, Shaw described his relationship with his quarterback in the long term.

“We’ve been working with each other 24-7,” he said. “We went to three camps together. We know how each other things and where each other are going to be. We’ve worked at that. I trust him to get the ball to me.

“And to win this game, man, this means the world.”

In the diminishing temperatures, Banks went to the air to try to get back into the game.

And it cost the Braves when Shook tried to force a ball into coverage — hey, you gotta try — but Reed drifted into the line of flight and picked the ball off.

Twenty-seven yards later, he, too was in the end zone.

The interception, and his game-leading 87 rushing yards, got Reed named player of the game. La Grande coach Rich McIlvoil, who got a bucket of ice over his head on the way to the team huddle after the game, called it a “family win.”

Whatever, La Grande now stands at the top of the hill. The Tigers earned it by outscoring their four playoff opponents 152-16 and shutting out their last three all in a row.