Dance: 'No satisfaction' from abrupt end of 2020 season
Tweet
The state's dance community reflects on the cancellation of the state championships due to health concerns about the coronavirus
March 16, 2020 by Danielle Schneider, OSAAtoday 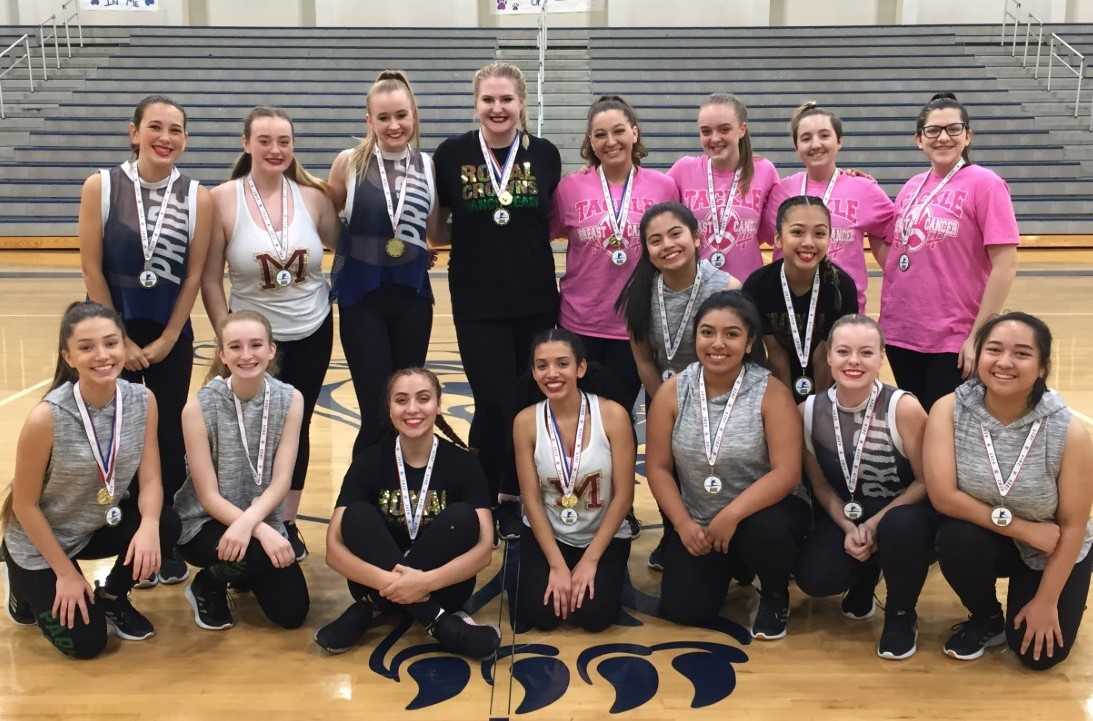 Members of the Northwest Oregon Conference all-league team are among those feeling the impact of the state cancellation.

The loss is devastating and acutely felt by all dancers.

“I definitely felt my heart shatter into a million pieces,” said Kaelyn Hill, a senior captain for the Stayton Highlights.

Dance team is nearly a year-round sport, with tryouts being held in spring, and the summer spent fundraising and attending dance camp. When August arrives, the vast majority of teams will start their official eight-month performance season.

From August to February, dancers pull double duty dancing at halftime of football and basketball games, pep assemblies, and community events as well as competing at their own competitions.

Teams will learn an average of five to eight routines. The final push comes in March, when teams are focused solely on their own competitions and making final preparations for the state championships. The state competition is the culmination of the work that began in August, and the opportunity for teams to perform their routines in their most polished and refined forms.

When word of the cancellation came out, all the experiences of those final moments of the dance season were lost.

“Right now, it’s just ended and there is no satisfaction with it. All the dancers need to have that one last time on the floor,” said Haven Barrett, head coach of the West Albany Hi-Steppers.

State means different things for all of our teams. It’s an experience steeped in tradition and one of the hallmark experiences of a dancer’s high school career. From walking into the tunnel at the Veterans Memorial Coliseum, to dancing the time-honored Grand Finale, to one final performance on the grandest stage of all, the experience cannot be duplicated.

The Stayton Highlights hoped to defend their 2019 state title. Pendleton looked to defend its back to back titles in 2018 and 2019. The Canby Cougar dancers were looking to defend their five-year winning streak. In the 6A division, with defending back-to-back champion Tigard sitting out for Nationals, the division would crown a new champion.

For the 34 seniors who made the All-State team -- an opportunity only open to team members in their senior year -- they lost their chance to perform the All-State routine in front of their teammates, coaches, and family members. This is truly a once-in-a-lifetime experience for these dancers.

Senior dancers who have excelled in academics and dance will miss the opportunity to receive a Dance Drill Coaches Association (DDCA) Academic and/or Dance Scholarship in front of their teammates and families.

For the eight students per team who are selected to compete in the drill down competition, they will miss the opportunity to compete for an individual award in our sport.

“Those of us that do this -- and I don’t care what you coach -- you are in it because you love it and it’s your passion and it’s your joy but when you don’t have any choices, it’s really difficult,” said SueAnne Williams, Clackamas assistant coach. “None of us are saying we shouldn’t be alarmed, that’s not what we are saying. We are just saying, let’s navigate this maybe a little bit differently for 2020 because none of us have done this before but at least give us the chance. I think we owe it to our students instead of just saying, 'It’s over.'”

The OSAA, after consulting with schools and venue partners, opted to cancel the dance and drill championships.

The state dance and drill competition began in 1974. This will be first time in 46 years where no champions are crowned.

Teams remain hopeful that once the coronavirus ban is lifted, they will be able to compete their routines one final time.

“It can be amazing. It can be a competitive event. That’s what we are pushing for,” said Robin Meier, head coach of the Stayton Highlights. “These are athletes. They thrive in that competitive arena. They want their moment to compete.”

The DDCA continues to explore ways to conclude the season and recognize all the hard work invested by dancers, coaches, parents, and schools. To that end, on Friday, when the state championships should have kicked off on the floor of the Coliseum, the DDCA will be using its social media channels to honor individual award recipients and teams.