Dance: Kishpaugh nominated for national coaching honor
Tweet
Debbie Kishpaugh, who has coached at Pendleton for 33 years, is among the finalists for the NDCA award
March 31, 2020 by Danielle Schneider, OSAAtoday 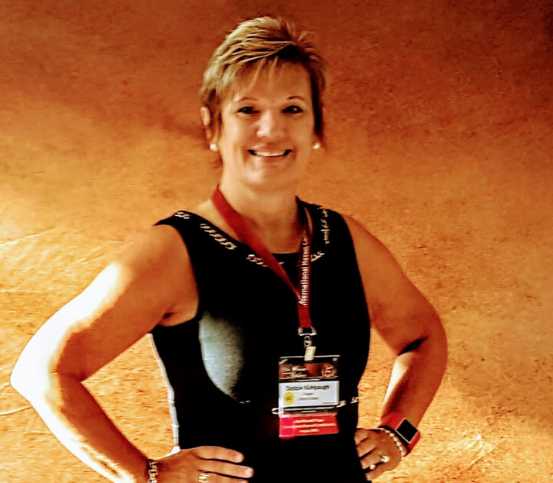 Pendleton's Debbie Kishpaugh has been nominated for national coach of the year by the National Dance Coaches Association.

Kishpaugh has been the head coach at Pendleton for 33 years. In addition to the nine state championships, her teams have finished in second place six times.

Coaching Pendleton’s high school team is not the only way Kishpaugh has brought dance to the Pendleton and Eastern Oregon.

Kishpaugh moved to Pendleton to work as fitness director at the Roundup Athletic Club. It was there that she started teaching rec dance classes in Pendleton.

In 1985, Kishpaugh officially started the Jr. Jam Dance Studio as part of the Roundup Athletic Club. The organization quickly grew to needing a space of its own and has twice outgrown its space.

Today, Jr. Jam teaches jazz, hip-hop, ballet, modern, and fitness to dancers from all over Eastern Oregon, as well as parts of Washington. Younger dancers perform locally at senior centers and local community events. The Jr. Jam competitive dance groups compete throughout the Portland area, as well as nationally in Boise, Anaheim, and Las Vegas.

Kishpaugh's teams have won several national titles in a variety of dance styles. Her studio is highly regarded in the dance team community. Dancers who have trained under her have gone on to perform professionally with the Disney Cruise line, Disney Character Cast Member, on Broadway, Boise State University, Oregon State University, Gonzoga University, Eastern Oregon University, Chapman University and the University of Montana.

As a member of the Oregon dance team community, Kishpaugh co-founded the Oregon Junior Dance Team Championships (OJDTC) in 2004. The OJDTC was started as a state championship experience for junior high, club teams, and high school JV teams.

The profits from the OJDTC are donated annually to the DDCA Scholarship fund, which is used to provide academic and dance scholarships to Senior dancers. The OJDTC has donated over $110,000 in scholarship dollars to the DDCA.

The impact of this donation has helped numerous dancers pursue education beyond high school. As a result of the OJDTC’s financial support, the DDCA was not only able to significantly increase the number of scholarships awarded each year, but we were also able to increase the amount from $500 to $1,000 and in some cases $1,500.

This truly wouldn’t have been possible without Kishpaugh’s generosity and the impact is felt by dancers from all over our state.

In addition to everything that she does for the dance world, Kishpaugh also finds time to volunteer weekly in her community by teaching fitness courses to incarcerated youth. As a result of the positive impact she has had on youth in Pendleton, the city council has proclaimed April 14 as Debbie Kishpaugh Day.

Kishpaugh has twice been named the Oregon 5A Dance/Drill Coach of the Year (2008 and 2016) and received the Dance Drill Coaches Association of Oregon Service Award in 2007 in recognition of her work through the Oregon Junior Dance Team Championships.

She received the DDCA Lifetime Achievement Award in 2016. She was also recognized with a Crystal Apple award from the Umatilla-Morrow County ESD for her work as a high school dance team coach.