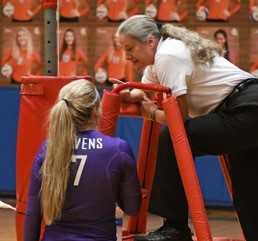 The recipient of this award must exemplify the highest standards of ethical conduct, moral character and carry the endorsement of the Oregon School Activities Association (OSAA).

Provost is an active official who has officiated NFHS volleyball for a total of 23 years. During that time, she has given back as a vice president and trainer for the GPVOA for more than 10 years and has traveled statewide training officials as part of the Volleyball Sports Specific Committee.

K.T. Emerson, OSAA Assistant Executive Director, who oversees volleyball stated, “Alicia’s leadership, professionalism and collaborative nature are just a few of the traits that make her a phenomenal official. We are grateful to Alicia for all of her work in the high school volleyball community in Oregon.”

In between stints as an OSAA official she has also coached high school volleyball at Wilson High School for 20 years, coached basketball for three years, and softball for 21 years. Alicia has also been a USAV official since 1983 and a collegiate official since 2004.

Section 8 is made up of officials from Oregon, Washington, Idaho, Montana, Wyoming and Alaska. Provost is the second Oregon official to receive this prestigious award. She joins Bob Hilsenteger, a long-time football and basketball official from Portland, to be so honored.