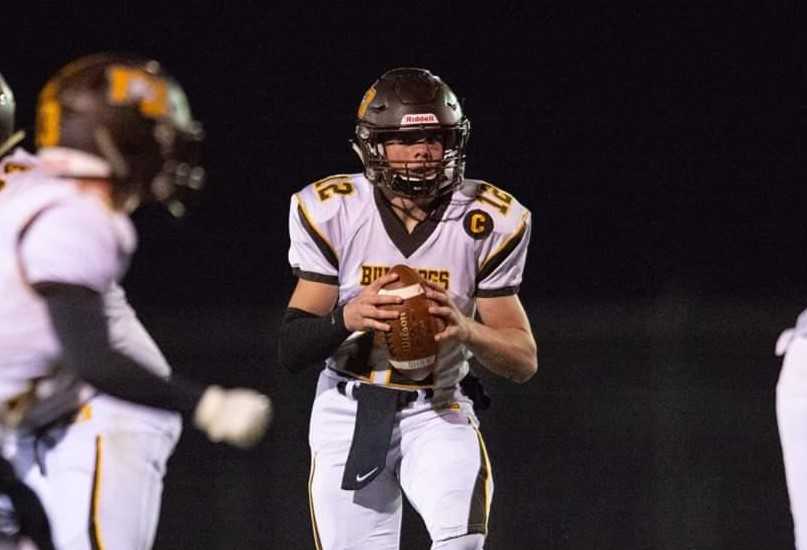 The North Bend High School community is coming to grips with tragedy this week.

Ian Spalding, a junior who was the starting quarterback and linebacker in football and starting catcher in baseball, has been missing since accidentally falling into the ocean Sunday night.

Spalding was climbing on rocks with two friends near Sunset Bay at around sunset Sunday when he fell about 50 feet into the ocean. According to a witness report from the Coos County Sheriff's Office, Spalding “slipped and fell, striking his head.”

A witness said that Spalding was in and out of consciousness while floating in the ocean. He disappeared from sight before the police arrived, and searchers have been unable to locate his body.

“Our community is kind of in shock,” North Bend athletic director Mike Forrester said. “You have some hope that some miracle is going to happen for the immediate time right afterwards, and it seems like at this point we're starting to try to come to grips with it.”

Bulldogs football coach Gary Prince said he will “never be able to say enough” about Spalding.

“He wanted to do things, accomplish things and become things, and he did everything that it took to get him in position to do it,” Prince said. “He was a man of character for his age. He did the right thing all the time. He was loved by many, and he definitely returned that love in his own way.”

North Bend requested and received special permission from the Department of Education to open the high school to students, who met with teachers and counselors Tuesday and Wednesday. More than 75 students participated in the search for Spalding on Sunday night and Monday.

“Our students have been really impacted,” Forrester said. “He was such a great kid. He was nice to everybody. You can't find a student at our school that's going to say anything negative about him.”

Spalding became the football team's starting linebacker as a sophomore and earned the starting quarterback job last season, leading the Bulldogs to a 6-4 record.

Spalding was evolving into an outstanding quarterback, according to Prince, showing some of the same abilities that Brody Lucero had in leading North Bend to a state championship in 2016.

“He definitely gave us the ability to push the ball down field, which we hadn't had in a couple years,” Prince said. “He was the same type of running quarterback that Brody was, able to get in there and hit the hole and get some hard-earned yards. He wasn't afraid of contact.

“We were looking to throw the ball quite a bit this season. It would've been a big year, definitely.”

Spalding was the starting catcher on the school's baseball team the last two seasons and was a member of the North Coos team that won the American Legion A state title the past two summers.

“He was a great leader,” Forrester said. “He wasn't a kid who was a scream-and-shout, rah-rah type leader, but he was a kid that worked extremely hard. He was a kid that was going to make the right decision, and people were going to respect that.”

Spalding's father, Mike, coached in North Bend's middle school football program and began assisting in the high school program when Ian was a freshman. Ian's sister, Emma, was an eighth-grader this year.

“Ian is a direct reflection of his parents,” Prince said of Mike and Carly. “They just did a good job supporting him and giving him the things he needed to grow into a fine young man.”

“I think we're going to grieve for a while, and then we're going to need to start healing. I don't know when that happens,” Forrester said. “This is going to go on through next year. This will be a big impact all the way through our school next year.”