The Coach and the Olympian: The friendship that never ended
Tweet
Beaverton swim coach Rod Harman and Olympic gold medalist Carolyn Wood met in the pool in 1959. They stayed close forever after.
July 20, 2020 by Norm Maves Jr., OSAAtoday 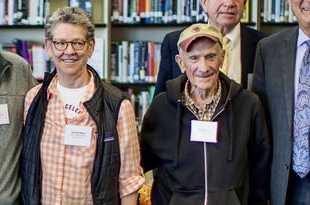 “Throughout high school and when I returned as a peer I felt such genuine authenticity from you. I never felt special, simply respected. Being gently teased (poking fun at my “poor losing behavior” after a super-slow-boat relay or later, at my lousy math skills when figuring splits!), I learned the power humor. Your gentle ribbing made me feel part of the group.

You are a master, Rod, at creating cohesive groups. I am so grateful for your inclusion, your humor, your humanness.”

It was sometime in May of 1976 when Carolyn Wood drove to Beaverton High School to find an oasis of comfort in a personal world that was collapsing all around her.

She had just lost custody of her infant son in a bitter court fight that was decided by the temper of the times. Her whole life had been hollowed out.

And she still had a secret boiling inside her. Only the court records, her partner, “maybe my counselor” and the closest of family members knew.

Now she needed to talk to Rod Harman and tell him everything. The two had developed a unique and enduring friendship since she arrived in September of 1959 for her freshman year at Beaverton, where Harman was a teacher and swim coach and Wood was — at 13 — already a national contender and a future Olympic gold medalist.

For his part Harman was well into the process of creating a Hall of Fame legend as a teacher and coach, which he established long before he died this past May 22 at 94.

Wood and Harman had been together as athlete-coach, teacher-student and teaching peers. Wood had been his assistant coach when she returned to Beaverton to teach English from 1967-74.

On this particular weekday, Wood found Harman sitting in the metal stands on the Erickson Avenue side of the school’s new track. Girls track was relatively new, and Harman and the stop watch constantly around his neck were always ready to teach.

“I went there with the intention of telling him that I’d just lost custody of Michael,” Wood said recently. “I had never spoken the words out loud to anyone. I told him that I couldn’t lie in court. I was gay.”

It was the reason Wood lost custody of her son. The wheels of justice and the sociology of the times turned a lot differently then.

Harman didn’t flinch. He never flinched. He was already calculating Wood’s next moves.

“Was it absolutely necessary?” he said, and gave Wood a comforting pat on the knee. Wood said that it was. She couldn’t lie in her deposition.

Harman asked after the little boy. Wood said he was fine.

Along the way, Harman reminded Wood that “even divorced parents stay close to their children. And you never stop being a parent no matter who gets custody.”

The longer they talked the better Wood felt.

“He was not the least bit judgmental about it,” said Wood, a Phi Beta Kappa English major who taught the subject to high school kids for 30 years. “All I got from him was acceptance — and love.

“I felt like I was talking to my own father, who had died six years before. Rod and I did have a father-daughter relationship.”

For all that, and more, he has been inducted into all the appropriate halls of fame, local and national.

After he retired, he went on to coach at Aloha, then Southridge. Into his 90s, he was the little guy at the end of the pool, the watch hanging from his neck and the words of instruction and encouragement ready on his lips. He remembered everybody — including a 1966 Beaverton alumnus who went on to be a sports writer — up to his dying day.

And he loved them all.

Wood saw him at work up close. And marveled at how he could connect with a kid. Any kid. As a high school swimmer between 1959 and 1963, she won seven individual championships and two relays.

Just before her sophomore year, she won a gold medal for the U.S. as part of a world-record 400-meter freestyle relay in the 1960 Rome Olympics. At 14.

“He was a master teacher,” Wood said of Harman. “I never saw him get angry. I never saw him not encourage a swimmer, no matter how terrible they were. He used to tell them, ‘If you want to swim, I’ll make you better.’

“He had a true belief in every kid he taught and coached. He could teach a 3-year-old to swim, or he could work with a poky girl and drop her time in the 400.”

Harman didn’t do it from a throne above the pool. He got wet.

“He’d get right in the pool with us,” said Wood. “When we needed to learn the flip turn, he would demonstrate it, then throw our legs over until we learned.”

And he was always available. There was the time in Wood’s school days when two of Harman’s better swimmers, sisters Gretchen and Terry Rittenour, had after-school obligations they couldn’t duck.

“So Rod would show up at the pool at 6 a.m.,” Wood said,” and they would do their workouts. There were only the three of them at the pool.”

As a strategist and organizer, Harman was peerless at one and tireless at the other. Wood honed her world-class swimming on the Multnomah Athletic Club’s national-caliber team, but Harman was just as good as anybody else who would ever coach her.

“His tapers were masterful,” Wood said. “He was always up on the latest techniques. He introduced double-day workouts. I think if he had taken me for the last month (during her national competition career), I would have been even better.

“He was offered the Multnomah Club job more than once. But he wanted to stay in the classroom.”

Teaching and coaching, then, was what Rod Harman was meant to do in this life.

The 1963 state championships opened at the University of Oregon’s Leighton Pool — on the day President John F. Kennedy was assassinated. Wood was a freshman in Eugene and headed straight across 15th Street for Rod Harman’s soothing presence. She took other Beaverton grads with her.

“We were so shattered at that time,” she said. “We felt so uncertain about the future. I spent all Saturday at the pool with Rod and the team.”

Wood and Harman became peers when Beaverton hired Wood to teach English. She taught after that at Glencoe, then Wilson high schools.

“I subbed for him now and then,” Wood said. “He and Barb had Rose and I over. We rented his house at Black Butte. He was my financial adviser.

“And we could always meet at the Grand Central Bakery on Multnomah Boulevard. Two cups of coffee and an oatmeal cookie.”

In 1992, when Wood went into the Oregon Sports Hall of Fame, she insisted that Rod Harman introduce her. In her popular autobiography, “Tough Girl: An Olympian’s Journey,” Wood remembers Harman as the equal of just about any coach she ever knew.

And toward the end this spring, when Harman developed a major case of cabin fever at his senior center residence, he called Wood for help. Confinement wasn’t his style.

Wood responded by shotgunning a “Hey, Beavos” e-mail out to everybody she knew soliciting letters to their old coach.

Twenty-six of them landed in Harman’s mailbox shortly thereafter.

It was, Wood concluded, the least a loving daughter could do for her other dad.