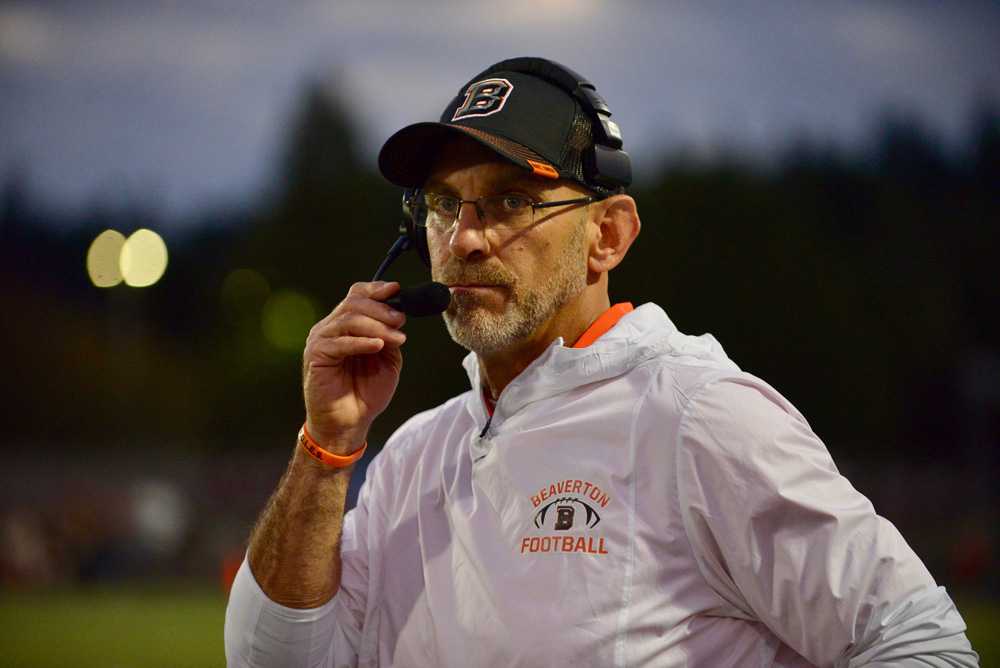 [Editor’s note: The idea behind “Alphabet Stories” is to write one noteworthy athletics-related story about each OSAA-member school. We started with Adrian HS on Sept.18. Today’s story is about Beaverton HS. The goal will be to write two per week. While we will be relying upon athletic directors to furnish story ideas, anyone may offer suggestions by emailing [email protected]]

Boyer is the current head football coach and head track & field coach at the high school, but his roots extend well beyond the 32 years that he’s been teaching and coaching at Beaverton High. Boyer moved to Beaverton when he was five years old, played youth sports on the school’s fields and inside the gymnasium, starred in football, wrestling and track while a student at the high school, met his wife in the school’s hallways and put two kids of his own through Beaverton High.

“It’s been an amazing experience to coach at the school I went to and say to the kids, ‘I’ve been there,’” he explained. “I love Beaverton High School. I’ve watched how the school has changed in diversity over the years, but the same feeling has been there all the way through. It’s just a place I want to be. I love the people there. I love the school. I can’t see myself being anywhere but here.”

College at Portland State, where he played on the line for the football team and threw the discus for the track team, took Boyer away for a few years, but he found his way back before his college career was up. Sidelined by a knee injury in his senior year at PSU, Boyer received a call from the Beaverton head track coach asking him to help out as the school had lost its throw coach. Boyer jumped at the chance and, after playing football one more year for the Vikings, he joined the Beaverton football staff as an assistant coach.

“32 years and I still haven’t gone anywhere else,” Boyer said.

How Beaverton is Boyer? He proposed to his wife at the high school!

Boyer and his wife, Jana, were best friends and dated briefly in high school but re-connected after college. When it was time to pop the question, he knew that it had to be in the hallways where they first met.

“I found the student who was using the locker Jana used when she was in school and asked her to take her stuff out of it for a night,” Boyer explained. Boyer decorated the locker inside and out then asked Jana to come with him while he stopped by his office.

“We had to make 2-3 trips past the balloon-filled locker because she kept looking the other way,” he said. “When she finally figured it out…”

Inside the locker was a sign asking for her hand and the ring she’s now worn for 25+ years.

Boyer’s been the head football coach at Beaverton for 17 years now and, six years ago, he agreed to head the track team as well (temporarily until the school could find a permanent coach). He’s taught special education and PE and, after he got married, moved within a stone’s throw of the school’s tennis courts.

“He is someone who has been at Beaverton for so long and has helped build that school to what it is today,” said 2017 grad Carson Crawford.

While loyalty and longevity are two obvious Boyer traits, there is another that is even more important: impact.

“For many people, Coach Boyer is more than just their coach, but someone that they can go talk to about school, sports or even just life,” Crawford said. “He is always willing to listen to his players and his students, which is why I believe he has been so successful and respected within the entire state.”

Mitberg was home-schooled until high school and said that Boyer helped him with the transition.

“I didn’t know anybody and he took me under his wing and taught me how to be a successful student,” Mitberg explained.

“My senior year when I tore my ACL, it was very emotional,” Mitberg recalled. “Something about who he is and what he did for me, Coach was able to make the transition of not playing that much better.”

As a former lineman and father to a lineman, Boyer holds a special place in his heart for the guys in the trenches.

“They don’t get their name called, yet they give everything to the team,” he said. “You can’t just have the ‘Look at me guys’ and be successful. My pride is the undersized linemen who are willing to sacrifice for the good of the team. They’re going to be successful in life.”

Boyer-coached teams have won at Beaverton. Beaverton is a medium-sized 6A school playing in the tough Metro League and finds a way into the playoffs consistently. Even so, Boyer doesn’t preach winning. Instead, he says things like this:

“It shouldn’t about the wins; it’s got to be about changing a kid’s life.”

“In my program we value the effort that you make, not the talent that you have.”

“My hope is that what you learn from football makes you a better employee, boss, friend, husband…That you can say you’re a better person as you move on in life because of football.”

“We want to show love to those kids who play for us,” Boyer said. “I’m going to give you the biggest hug I can. Not a bro hug. This is what we need to be doing as coaches to our players and students as we mentor them. If it’s only about winning the game, if all they learn is how to block and tackle, we’re failing them.”

“I think, for myself and many of my teammates/classmates, we viewed Coach Boyer as someone who always wanted the best for his athletes and his students,” said Crawford. “He has earned every ounce of respect that everyone within the Beaverton community has for him.”

“I’ve never met a coach so committed to the kids in the program,” added Mitberg.

“Kids are busting their butt for you,” Boyed saidd. “You’d better work for them.”

That’s something Boyer has been doing at his alma mater for 32 years.