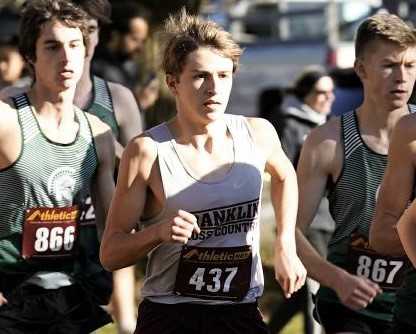 With 19 state championships under his belt, Jesuit cross country coach Tom Rothenberger often has the right touch in cultivating his athletes' talent.

This year, though, with the season postponed until March due to the COVID-19 crisis, Rothenberger is pleased to see that his runners are proving quite adept at making their own way.

“I think this whole thing has created independence,” Rothenberger said. “What I think I'm seeing is that maybe I was in the way. Let them to their own devices.”

In a normal year, early November would mark the state championships and the prestigious Nike Cross Northwest meet. Instead, many of the state's top runners are keeping busy by maintaining their edge with training runs, time trials and virtual meets.

Jacob Michaels, coach of reigning 6A boys champion Franklin, also is delighted with how his runners are attacking the period.

“It's what you wanted athletes to do during the pandemic, take matters into their own hands and do something healthy,” Michaels said. “I'm completely in awe of them. They like to race. They've managed to figure out ways to get races in, either virtually or other ways.”

Jesuit's boys, 6A runners-up last year, are competing as Stumptown Running in the weekly Nike Cross Virtual series and as a “pod” in races at Hydrangea Ranch in Tillamook.

“We thought the boys were maybe a top-10, top-five team in the country when everybody is competing,” Rothenberger said. “In that sense, it doesn't totally surprise me. I don't think we're the best team in the country, but it's exciting for the kids.”

Jesuit's girls are ranked third in the Nike Cross Virtual series. They feature junior Chloe Foerster and senior twins Molly and Paige Grant, who have committed to Notre Dame.

Foerster continues her dramatic rise from last year, when she gave up soccer and finished fourth in the 6A meet as a sophomore. She cut 25 seconds off her personal best Oct. 31 by clocking 16 minutes, 50.2 seconds in a Green n Gold time trial.

“We always knew she was talented, but all of a sudden, she's just changed in the sense that she's now a runner,” Rothenberger said. “She has that footspeed that very rarely runners have. I've been blessed with some pretty talented kids, and there's no doubt that she's the best I've ever had.”

North has defied the shutdown to set personal bests in four distances this year. The Colorado-bound Robertson, last year's 6A runner-up to teammate Aidan Palmer, set the school record in the 3,000 in a spring time trial (8:24), although Palmer got it back. Robertson also recorded the school's No. 2 time in the 1,500 (3:51.0).

Jesuit has been practicing intermittently throughout the shutdown – now meeting twice a week – but Franklin didn't begin official team workouts until two weeks ago. Michaels lauded his team for staying fit.

“The amount of running they've done on their own, or in small groups informally, has been pretty unbelievable,” Michaels said. “I don't think Charlie North has missed a day of running in seven months, which is kind of the Franklin way.

“I'm ecstatic … It's really the way that Franklin is able to be competitive at a state level. The kids, maybe because they live around Mt. Tabor, they will put in work every day.”

Michaels said Franklin's girls team also has kept pace with daily workouts, behind the leadership of senior Autumn Ost, who drew the team together during the summer and has acted as coach and captain.

“The girls love it,” Franklin said. “They've become an independent team unit with her as leader. She's probably the best team leader I've had in my 20 years of coaching.”

Jesuit and Franklin runners have led the way in the Hydrangea Ranch time trails. The events – organized by Rothenberger, Tillamook coach Pat Zweifel and Gear Up Sports – have become increasingly popular, going from about 30 runners in the first race Sept. 27 to about 150 in the third race Oct. 24.

The fourth and final Hydrangea Ranch time trial is Saturday. Waves of 5 to 10 runners will go off from 8 a.m. to 3 p.m.