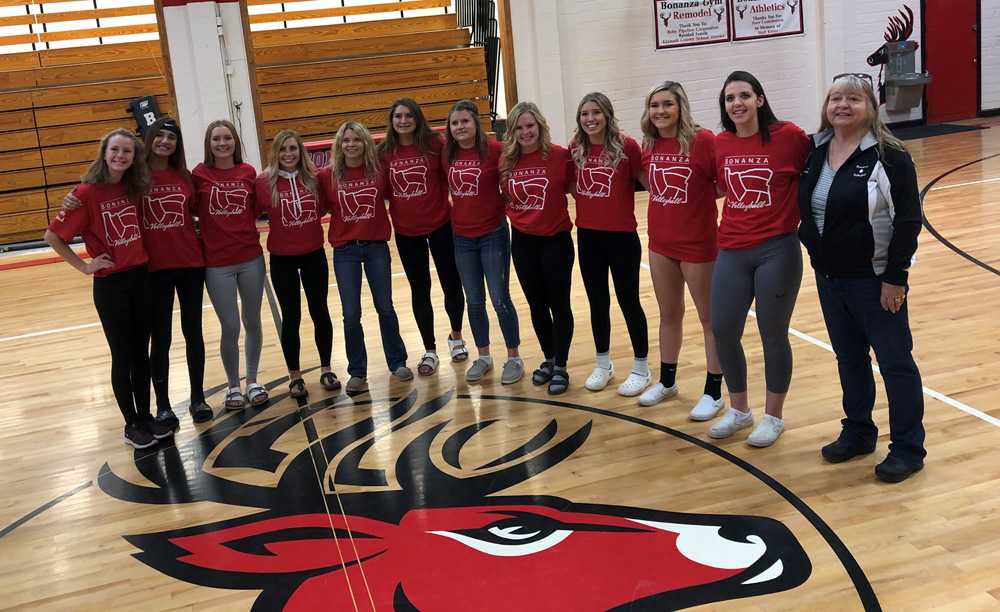 [Editor’s note: The idea behind “Alphabet Stories” is to write one noteworthy athletics-related story about each OSAA-member school. We started with Adrian HS on Sept.18. Today’s story is about Bonanza HS. The goal will be to write two per week. While we will be relying upon athletic directors to furnish story ideas, anyone may offer suggestions by emailing [email protected]]

In the Lost River Valley, 25 miles east of Klamath Falls, sits the town of Bonanza, an agricultural and ranching community of fewer than 500 people. Bonanza High School, which serves the town and the surrounding community, drawing kids from more than 50 miles away, has 110 students in grades 9-12.

And one iconic coach.

Donna Romtvedt attended Bonanza HS herself and wore the Antler uniform proudly. She returned to the area after college to teach at the school and, in 1982, took over as head coach of the Antler volleyball program.

Thirty-eight years and 586 wins later, she’s still on the Bonanza bench, taking the girls who come out for the team and coaching them up.

“I pull a lot out of my kids every year,” she says. “They overachieve. We take them as far as we can.”

Where Bonanza has gone, 22 times in 37 years, is to the state tournament. That’s a remarkable rate of success for a school where athletes play three sports and do not have the opportunity to specialize; and for a small, rural school where, as Romtvedt puts it, “You get what you get.”

The key to success, she says, is in building relationships.

“Teams that are successful build on the momentum of success,” she says. “You have kids willing to be involved, work hard and wanting to do things correctly.”

“Donna Romtvedt has been making confident athletes for decades, through dedication and skill that has touched the lives of countless Antler volleyball players,” says Bonanza athletic director Sergio Cisneros. “Donna's calm, skillful coaching insists on the best of each player--as well as herself--at all times. She is consistent, compassionate, tough, fair, hardworking, honest and thoroughly ethical in all aspects of conduct.”

Romtvedt also is competitive. But when told that her career win total currently places her 12th on the Oregon all-time list, she didn’t care.

“I never even thought about it,” she says. “I just want my players to be successful.”

The 2019 team lost just six times and became Romtvedt’s 22nd state tournament team. The Antlers finished as high as third in 1994 but often struggle against the private schools or public schools in larger population areas.

“We have been close [to winning state] a few times for sure,” Romtvedt notes. “Would I like my kids to have that? Of course! But I don’t feel like we haven’t accomplished things without one.”

Romtvedt retired from teaching in 2013 and contemplated hanging up the whistle at the same time, but seven years have since passed, with four more 2A state tournament appearances, and she remains Bonanza’s coach.

“I still enjoy it,” she says. “My husband’s still working and it gives me something to do.”

There’s more to it than that, however. Romtvedt made an investment in the community all those years ago and she is waiting for someone else, her successor, who is committed to making that same investment.

“It’s hard in small communities to get coaches,” she says. “I don’t want it to be a revolving door. That’s difficult for kids.”

“So I keep thinking, ‘Someone’s going to come in,’” she continues. “And so I say, ‘one more year and one more year’ and you see the kids coming, kids that you’ve seen since kindergarten and kids you knew would be players since the sixth grade…you have to stay.”

Romtvedt’s longevity means that she’s coached scores of older siblings and quite a few parents, too.

“Pretty soon when they say, ‘You coached my grandma,’ it will be time to be done,” she says. “It means you’ve been in it too long.”

Until then, Romtvedt will keep coaching the kids up and seeing what happens. Like this season, if there is one. The Antlers are loaded with hitters but, after graduating two, four-year setters, need to find someone capable of delivering buttery sets.