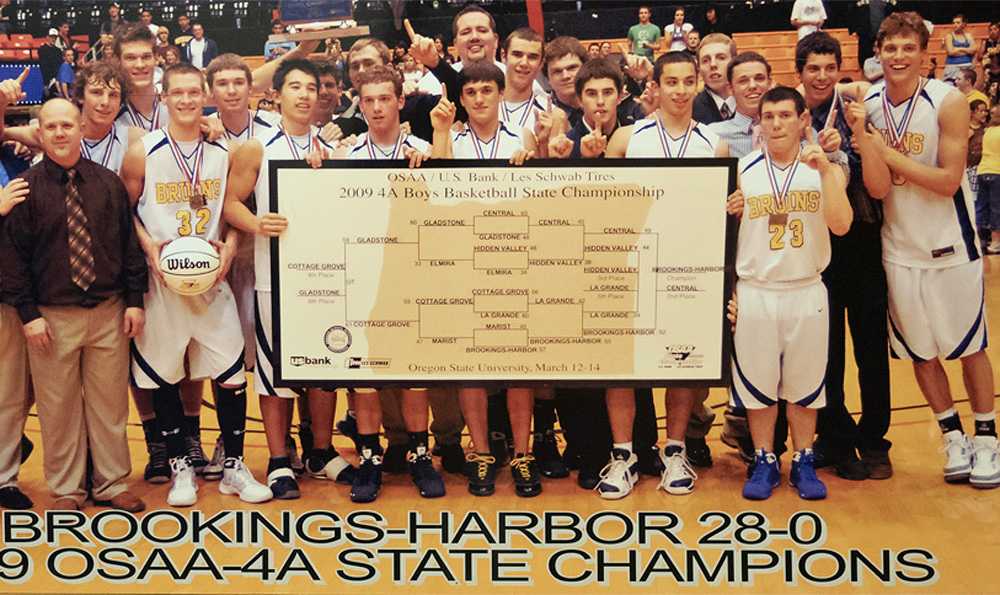 Fred Corpening (far right), who grew into a basketball star, celebrates the 2009 state title with his Bruin teammates

[Editor’s note: The idea behind “Alphabet Stories” is to write one noteworthy athletics-related story about each OSAA-member school. We started with Adrian HS on Sept.18. Today’s story is about Brookings-Harbor HS. The goal will be to write two per week. While we will be relying upon athletic directors to furnish story ideas, anyone may offer suggestions by emailing [email protected]]

When Fred Corpening entered high school at Brookings-Harbor in 2005, he was certain that football was his destiny. He loved playing quarterback, was athletic and hardworking and believed that his skills were ideally suited for Friday nights.

If not football, baseball was going to be where Corpening made his mark with the Bruins. He was “plug and play” on the diamond, the type of utility player who could make a significant impact no matter the position.

So how did Corpening end up leading Brookings-Harbor to the 2009 OSAA 4A state title in basketball? Let’s just say the sport grew on him and he grew on the sport.

Corpening had tall parents – his father is 6-3; his mom 5-9 – but he stood just 5-7 as a high school freshman, not the ideal height to make a mark in the gym. A power forward type with average skills, Corpening viewed basketball as his “in between” sport, the sport he played after football and before baseball. It was something to do.

“There were kids who were so much more advanced than me in basketball in my class,” Corpening said. “It was fun just to play with them.”

Corpening was a hustler and had enough hops to touch the rim, but he didn’t sniff varsity as a freshman, when Brookings-Harbor finished under .500.

Corpening had always been the medium-sized kid – not the shortest but nowhere near the tallest – when he started to grow exponentially. He got to 6-2 as a sophomore and eventually topped out at 6-4. And while he added height, his trademark athletic ability, work ethic and unrelenting hustle never left him.

As a sophomore, Corpening swung between the junior varsity and varsity and was on the varsity roster when the Bruins (15-12) made the state tournament. There they lost by double digits to Tillamook and Henley and were eliminated.

That summer saw Corpening complete his transition to full-fledged basketball player. He grew into his body, improved his athletic ability even more and became someone who played above the rim and beyond the three-point line. The team also was improving rapidly. Brookings-Harbor had a core four of Corpening, 6-8 post Kenton Bansemer, 6-2 shooter Chase Bansemer and superb point guard Chris Hodge and they played 30 games that summer.

“That set the tone,” Corpening said. “Something about the program changed. There was new excitement about basketball in the school and on the team. The whole team bought in and we went from a program that was good to one that was really good. It all came together at the right time.”

Corpening quit football before his junior season and took that time to hone his hardcourt game even more. Brookings-Harbor lost twice to California teams but was undefeated in Oregon entering the state tournament. Corpening was brilliant – the only player at the 4A tournament named unanimously to the State Tournament First Team – and the Bruins made the state championship game before falling by three points to Marist.

“It was neck and neck the whole way through,” Corpening recalled. “We had a chance to tie with a three pointer at the buzzer, but it didn’t fall.”

With the team’s core group all back for their senior seasons, Corpening and his teammates had their sights set on winning a state championship for Brookings-Harbor, a school that hadn’t won a title in any sport for 28 years.

“That was our one goal,” Corpening said.

The 2008-2009 season came together just like Bruins’ players had dreamed. The players were always banged up it seemed – “because of how hard we played on the court,” Corpening said – but they did not lose. Brookings-Harbor was 25-0 going into the state tournament, crushed Marist in revenge to get to the semifinals, then handled La Grande before edging Central, 52-49, to complete its undefeated run.

“We took the season game by game,” said Corpening, who averaged 15.2 points and 7.5 rebounds per contest. “I would have been disappointed if we didn’t win state. Going undefeated was the cherry on top.”

A few weeks later, Corpening was voted the state 4A Player of the Year. Not bad for a kid who stood just 5-7 three years before and viewed basketball as a sport to pass the time.

Corpening, who went on to play collegiately at Oregon Tech, had advice for players who face height challenges like he did as a freshman:

“Hustle. Work ethic. Effort. Determination. Always keep that mentality. The intangibles will help you more and stay with you. Height and athleticism…you never know when or if they will come…but being a workhorse…it’s contagious in a locker room.”