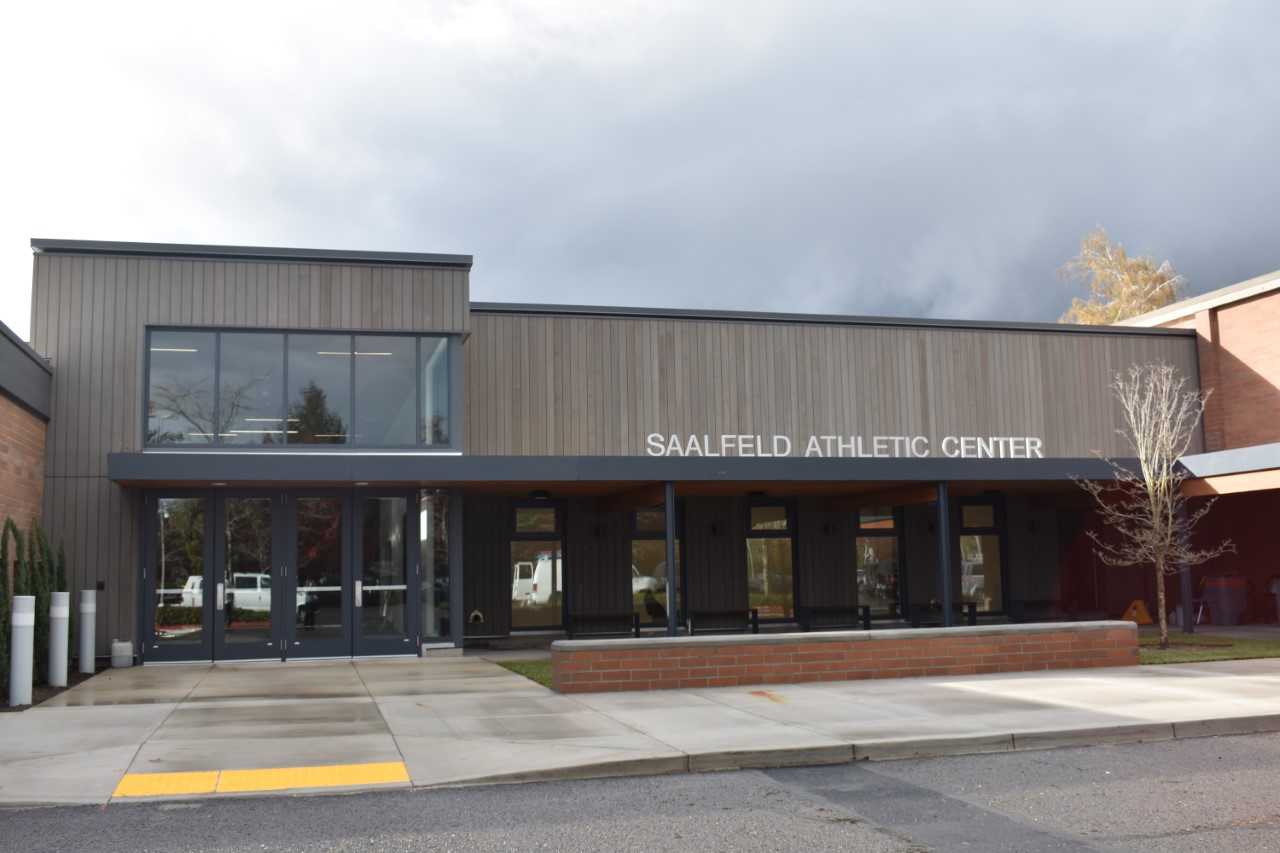 The Saalfeld Athletic Center was a $5 million project for La Salle Prep.

Back when the school opened in 1966, girls sports had yet to arrive on the scene. As athletics evolved over the years, the school struggled to adjust, having the girls use a locker room originally intended for visiting boys teams.

“The whole thing was just patched together from a design from the 1960s,” athletic director Chris George said. “It just didn't work. It wasn't designed for the type of school we have.”

Now, thanks to a $5 million project, the Milwaukie school is more than up to speed. The new Saalfeld Athletic Center, completed this month, is 3,200 square feet and includes a fitness center, training room, locker rooms and team rooms, among other features.

“We have to acknowledge that a lot of schools are upgrading, North Clackamas, the PIL,” George said. “We need to, as well.”

The ball started rolling in Feb. 2018 with a donation from the late Elsie Franz Finley, a Milwaukie banker and philanthropist. She gave $1 million in honor of the late Fr. Lawrence Saalfeld, a former member of the La Salle Prep board of trustees (1992-99) who was a spiritual advisor to the school.

The school also received a $1 million gift from Jim Pliska, a 1977 graduate, and his wife Linda. The donations provided the foundation for a fundraising campaign that began in Feb. 2019. Construction began in March in the days after the initial COVID-19 shutdown.

Also included in the project is a new gym floor and a lobby with a commons area. A large touchscreen will serve as a virtual hall of fame, providing access to the school's athletic history and replacing banners and bracket boards, which were placed in storage.

“Through our research, we found that those things are pretty popular now,” George said.

A new hallway on the south side of the gym gives better access to locker rooms and relieves pedestrian congestion. Athletic department offices, public restrooms, concession and merchandise space, a coach conference room and a multipurpose classroom also were added.

“It's transformative for everybody,” George said. “It's just going to open up so many more doors for our community to be thinking about how they engage in physical fitness and athletics. It's really going to allow our coaches to utilize our facilities in a completely different capacity.”

Some of the wood from the old gym floor, which dated to the school's opening, was fashioned into cornhole boards that sold for $6,000 each in an auction. The new floor has a continuous subfloor system that alleviates dead spots.

“The floor is awesome,” George said. “We got on it a little bit in the fall. Kids noticed a difference right away. It really pops.”

The gym has been named the Pliska Family Gymnasium. The court was officially named Cleghorn Court, in honor of Jack Cleghorn, who coached the Falcons to four state titles in the 1980s.

George, a La Salle Prep graduate, said it was important to maintain the nostalgia and history of a gym that is affectionately known as “The Brick Oven.”

“It's cool when you walk in and you can see the exterior brick facade of the gym in the lobby,” George said. “Keeping that intact was a priority because it's so historic.”

Phoenix, a member of the 4A Skyline Conference, is the largest high school in southern Oregon that does not have artificial turf. The district has raised about $350,000 toward its goal of $700,000 for a 99,000-square foot playing surface, which it will call P-T Rising Field.

The fundraising effort represents a rallying point as the community recovers from the tragic fires, according to Phoenix athletic director Dave Ehrhardt.

“It's just huge for us in terms of being able to give the community a start in the rebuilding effort,” Ehrhardt said. “So much has been lost down here. It's providing a sense of hope as we start to rebuild these communities.

“If it wasn't for the fires, we probably wouldn't be doing this right now. But we just feel like it's the right time because it'll give the community a feeling of hope. We're reaching out to vendors, foundations, alumni, district staff … all over the place.”

The district plans to begin construction on the field Jan. 4 and start installing the playing surface Jan. 25. Practices for football and soccer are scheduled to begin Feb. 8 and Feb. 22, respectively.

The district coordinated with TableRockSports.net to livestream a four-hour “Turf-A-Thon” fundraiser on Friday night, during which it accepted call-in donations.

Donations can be made at getmeregistered.com/ptrisingfield. For more information, contact Ehrhardt at [email protected]

Glide track: A yearlong fundraising effort has paid off with a new track for Glide High School.

The old track, built in the early 1980s, needed to be replaced as the asphalt had fallen into disrepair. Glide Booster Club president Richard Livermore told the Roseburg News-Review that the project was estimated at $360,000 and ultimately cost $418,000.

The community began raising money in June 2019 and collected $250,000. The school district contributed most of the remaining cost.

Work on the eight-lane track was finished in late October.

“It looks really good ... looks beautiful,” Livermore told the News-Review. “The workers did a superb job. I’m glad we started when we did.”

Glide plans to name the track after Maynard Mai, the school's former cross country and track coach who died in July at age 86.