Girls soccer: Tualatin's Togiai will skip season, head to UP
Tweet
Timberwolves forward Cally Togiai, the state's top-rated senior, will get a jump start on her college career at Portland
January 6, 2021 by Jerry Ulmer, OSAAtoday 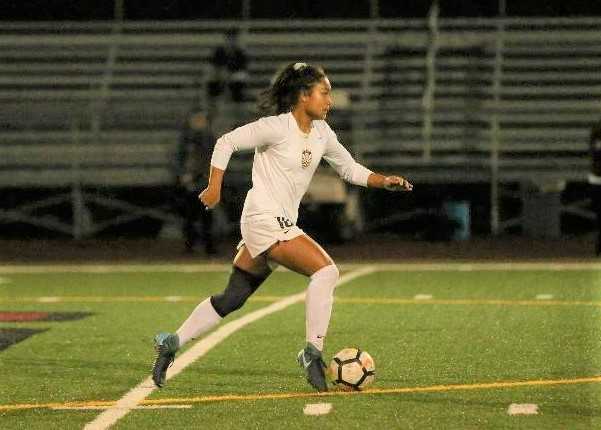 Cally Togiai scored 18 goals as a junior to lead Tualatin to the Three Rivers League title. (Photo by Emily Johanssen)

Since committing to the University of Portland as a freshman, Tualatin's Cally Togiai has eagerly anticipated her college soccer career with the Pilots.

Now a senior, she can't wait any longer. The explosive forward has decided to pass up her final season, opting to graduate early and enroll at Portland. She moved to the north Portland campus Wednesday.

“I was just really excited to get on campus,” Togiai said. “I talked about it with my coaches and my counselor, and I figured it was the best option. Also, it's a smoother transition as a student-athlete, because I won't have to worry about playing the games during the spring and I can focus on school. But when fall comes, I'll have more training and school under my belt.”

Togiai, rated by TopDrawerSoccer.com as a four-star recruit and the top senior prospect in Oregon, said she probably would have played her senior season if it had started earlier. The season is scheduled to begin March 1.

“For me, it's definitely hard because in high school you get to play for your community,” said Togiai, who has played a handful of matches with her club team, Crossfire United, during the shutdown. “It's tough. My friends and I have played together for a long time, and just not having that last-hurrah moment, it's kind of hard.”

Togiai was the Three Rivers League player of the year as a freshman and junior and is a two-time 6A first-team selection. In 2019, she scored 18 goals and led Tualatin to the league title and a 6A quarterfinal berth.

“She's the kind of player that probably could have said, 'I want to go to this school,' and then they would've watched her video and said, 'Yeah, you can play here,'” Tualatin coach Kale Dwight said. “She's the best player, male or female, that I've ever coached. She is so phenomenal.”

Sometimes, her playing style even dazzled the Timberwolves.

“My team was good, but she's in a league of her own, and what we would do is we'd pass her the ball, and then just stop playing, and just watch her play,” Dwight said. “She was responsible for 70 percent of our goals in three years. She's so fun to watch, and she just played with a smile.”

Togiai grew up learning soccer from her sister, Corinne, who helped lead Tualatin to state titles in 2013 and 2014 and was the 6A player of the year as a senior in 2015. Corinne's college career at Oregon was shortened due to an ACL injury.

“She was kind of my inspiration to start playing,” Cally said. “Us being the same position, attacking-wise, she was very impactful on my soccer career. She'd always push me, and I'd always push her.”

Dwight, the team's coach since 2013, said he had heard about Cally as a youth player but didn't see her play until she was a freshman.

“I was just blown away,” Dwight said. “She's so talented, but it goes beyond that. It goes to her attitude, as well. She's a natural-born cheerleader. When I do sub her out, she is there with me cheering on the girls, high-fiving them when they do stuff well. The team just eats that up.”

Cally started playing at age 5, often joining her sister at the high school field, just a few steps from their home.

“She's definitely given me a lot of knowledge and increased my soccer IQ,” Cally said of Corinne, who has graduated from Oregon. “She is really technical. I'm pretty technical, too, but I feel like she's more calm and composed on the ball, and I can just go at them with speed and attack really fast.”

Cally could turn the momentum of any match in an instant.

“She is so good because she has these bursts of speed to get by any defender, and her ball control and her left- and right-footed shots are just hard and powerful,” Dwight said. “When we're down a keeper, doing little scrimmages, I'll play keeper, and I just jump out of the way when she shoots. I don't want to be in that line of fire.”

Despite her commitment to Portland, Togiai said she got plenty of other college offers throughout her high school career, the majority on the West Coast. But Togiai, the first recruit for Pilots coach Michelle French, stuck to her word and signed in December.

“I knew for sure that I wanted to go to UP,” she said. “I respectfully called everyone and kind of let them know, being transparent, and said that I wasn't going to be going to their school. It was still tentative because it was a verbal commit, but I'm still going strong.”