Alphabet Stories: Clatskanie HS
Tweet
The boys and girls on the forestry team are all wonderful fellers
February 1, 2021 by John Tawa, OSAAtoday 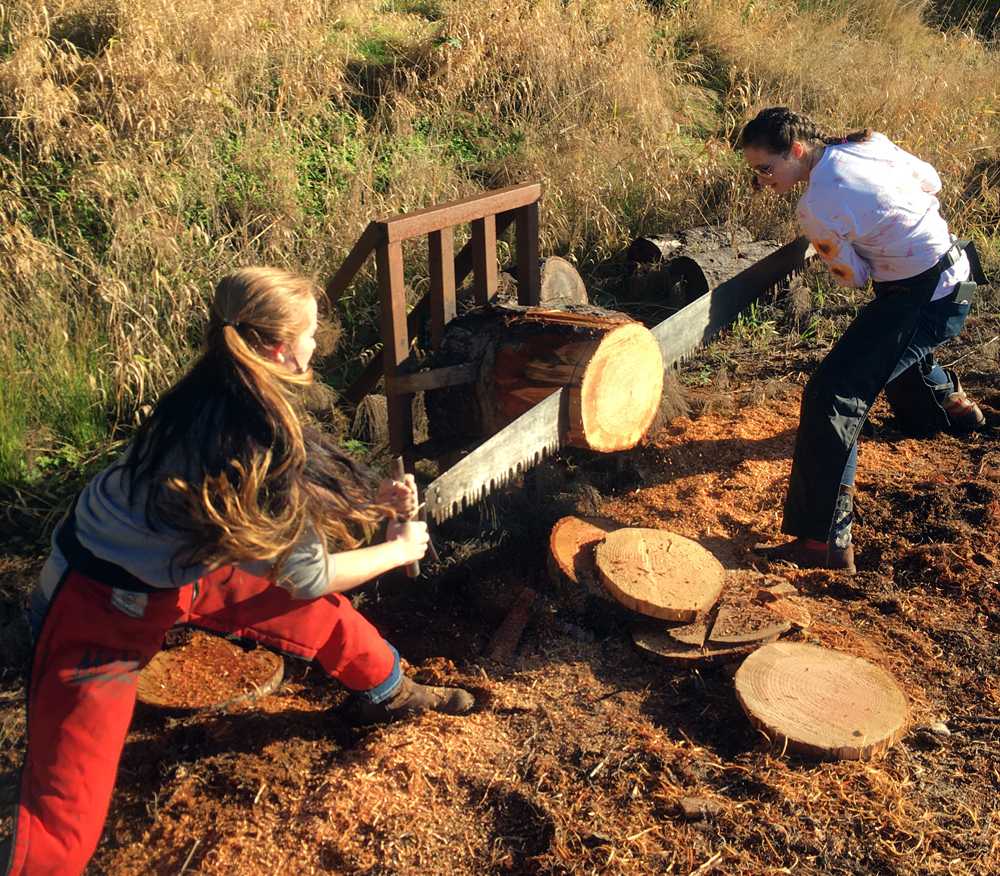 Two Clatskanie girls cut into a log. It was worth a buck.

[Editor’s note: The idea behind “Alphabet Stories” is to write one noteworthy athletics-related story about each OSAA-member school. We started with Adrian HS on Sept.18. Today’s story, more than four months later, is about Clatskanie High School. The goal will be to write two per week. While we will be relying upon athletic directors to furnish story ideas, anyone may offer suggestions by emailing [email protected]]

When Clatskanie HS asked if I’d be interested in writing an alphabet story about its state champion forestry teams, I knew just what to say:

I’ve written a lot over the years about volleyball and football and baseball, but never forestry. I was eager to take a hack at it.

“First team, first title,” he said. “I was blessed with a great group of hardworking students.”

Clatskanie won three more championships over the next four years, including in 2017, when the team had the All-Around Jack, All-Around Jill and All-Around Technical Forester in the state.

The state competitions combine both physical feats and technical events. Participants can log roll, throw the axe, spur climb, lay fire hoses, read maps, demonstrate prowess in first aid and compass read, among many other things focused on the outdoors and a woodsman’s life.

“It’s a diverse program; the kids love to compete in it,” said current Clatskanie coach Deney Flatz. “Many are athletes. Others are those who never cared to compete in traditional sports.”

Flatz, a logger and wildland firefighter for 40 years, mentored Skirvin when he first got started in the forestry industry. He took over at Clatskanie in 2018 after Skirvin left to start a forestry program and coach football at Waldport HS.

Flatz proved a capable replacement. Clatskanie took second in state his first year but returned to the top of the canopy in 2019.

When Clatskanie does lose statewide competitions, it’s usually to Sweet Home. Both are situated in timber towns with strong administrative and community support.

Flatz said the rivalry is a friendly one. There’s no axe to grind.

“The competition is all out, but the sportsmanship is unprecedented,” Flatz explained. “Everybody gets along and cheers for everybody. There’s lots of camaraderie.”

Recently, Flatz said that his team has excelled in spur climbing, speed climbs up a tree principally using spurs; and cable splicing , shoving a spike through a cable using only your hands. The team also loves to arbor climb, where you pull yourself up a tree on a rope; and to choker race, which is a feat of speed, cardio and control over an obstacle course.

Because of COVID-19, forestry competitions in 2020 were all virtual, which wasn’t the same as gathering together for events. It can be difficult to demonstrate skills (as well as a chipper attitude) over Zoom.

Flatz said he hoped that in-person competitions would resume later this year.

“When we put on an event, it’s not just the school involved; it’s the entire community,” he explained. “They act as judges.”

If they do get to compete again in 2021, Clatskanie and Sweet Home are expected, once again, to battle for state supremacy.

“This year is up in the air,” Flatz said.

It’s possible that one team will emerge as the best you ever saw.