Alphabet Stories: Cottage Grove HS
Tweet
Lions demonstrate their pride by “showing up” during COVID times for themselves and their teams
March 8, 2021 by John Tawa, OSAAtoday 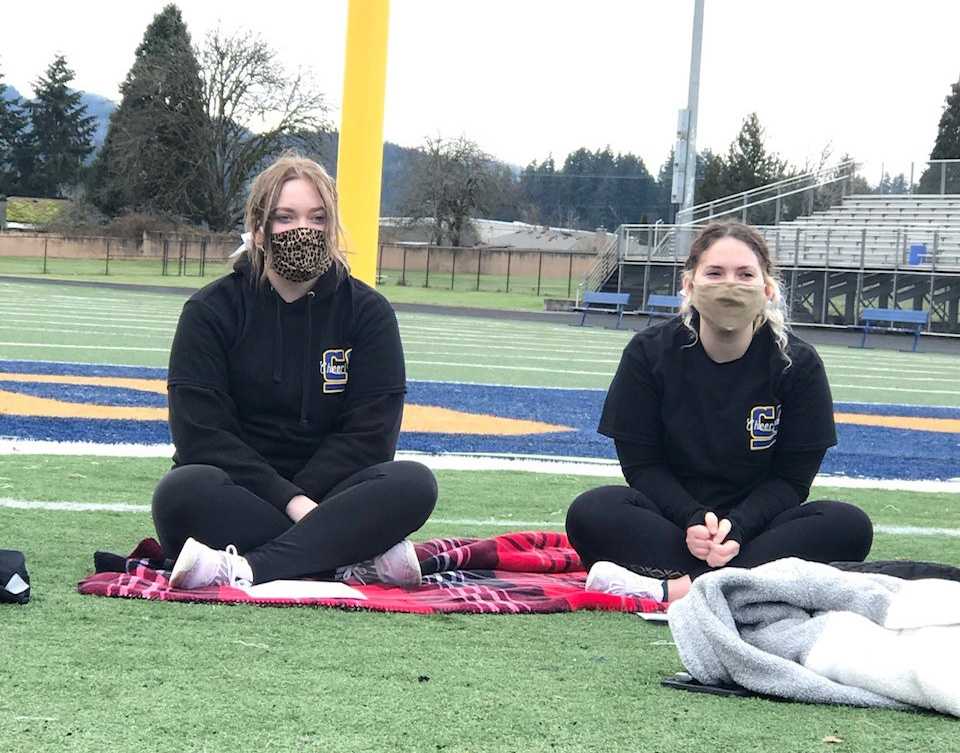 Hey all you Lion fans, stand up and clap your hands for senior cheerleaders Bailey Cordin (left) and Kassy Cave. They showed up

[Editor’s note: The idea behind “Alphabet Stories” is to write one noteworthy athletics-related story about each OSAA-member school. We started with Adrian HS on Sept.18. Today’s story, more than five months later, is about Cottage Grove High School. The goal is to write two per week all the way to Yoncalla! While we will be relying upon athletic directors to furnish story ideas, anyone may offer suggestions by emailing [email protected]]

From June until early February, with the COVID-19 pandemic in full force and the prospects for Oregon HS sports anytime soon no more than a pipe dream, the Lions of Cottage Grove had 60-80 kids, and about a dozen, mostly volunteer coaches, spread out over three cohorts showing up for workouts outside on the turf, rain or shine, to do general conditioning workouts.

“They had minimal access to equipment or the weight room but they showed  up anyway,” Myers said.

“They were not allowed to go inside other than the bathroom but they kept showing up.

“The kids were not allowed to use balls most of the time or hit in football but they kept showing up.

“They had to wear masks but they kept showing up.

“The drinking fountains were off and they couldn't get water from their friends but they kept showing up.

“They couldn't high five but they still kept coming.”

Not even two COVID scares, which shut workouts down temporarily, stopped the athletes from showing up and getting after it.

So were his coaches.

“The volleyball girls that showed up did so because they are dedicated athletes,” said volleyball head coach Abby Ladd. “That is what it comes down to: Not having any promise of a season and still putting in the work. It would have been so easy for them to talk themselves out of going to workouts, whether it was because of the rain, the cold, or the mere fact that it could have felt like they were doing it for nothing. The circumstances were stacked against them and they still put in effort and it built hope all around.”

Melissa Gemmett, who coaches the cheer squad, said that when the school decided to provide supervised workouts, she knew that she had to be involved.

“Showing up, being present with them, and showing them that I care about them was the focus,” she explained. “I think giving the kids a reason to get out of bed is so important! The athletes proved that they were happy and grateful for the time we had together. We ended up having so much fun. To be honest, I have never seen a group of athletes get along and enjoy each other this much. This is going to be my most memorable year just because of the unique bond the team has.”

Avery Hutchins, a volleyball captain, went to the workouts faithfully, even as she began to doubt that she would ever take the court her senior season for the Lions.

“I wanted to be prepared and fulfill my role as a captain to set an example and work hard,” she explained. “The thing that I will remember the most is how everyone came together for a bigger cause than just ourselves. We were willing to follow the strict regulations just so we could play the sport that we love. I was able to grow closer with my teammates and we were all there to support each other even when no one knew what was going to happen.”

“It was definitely a struggle to stay motivated during these times,” added volleyball senior Matty Ladd. “We weren’t sure if we would have a season but we just stayed optimistic and put in the work. I got to bond with some of my teammates and I learned to just go with the flow. It's important to realize that not everything is perfect but it works out. I'll remember looking back that I was able to live through a pandemic while playing the sport that I love with my closest friends.”

Cottage Grove opened its season March 4 with a sweep of Elmira. Two days later, the Lions  battled 2019 3A runner up Creswell through four tough games before losing. The effort, even in defeat, demonstrated the value of those cohort workouts.

“The volleyball program greatly benefited from our Season 1 workouts because it gave the girls the opportunity to reintroduce athletics into their schedules,” Coach Ladd said. “It got them out of the house and interacting face-to-face with other people, which made a huge difference in morale, even from six feet away. On our first day of practice, there was a clear difference in energy from the girls who had regularly attended the Season 1 workouts and those who had not.”

“I think one thing that will stick for me was the consistency and dedication we saw from so many athletes schoolwide,” Ladd added. “We are a small and tight knit community that shows up, and it was clearly visible through these athletes who made the efforts even in unfortunate circumstances. I know this is a story I will tell to teams to come when they have excuses about why they can't show up. Hopefully, this group will provide motivation to them, as they did to me.”