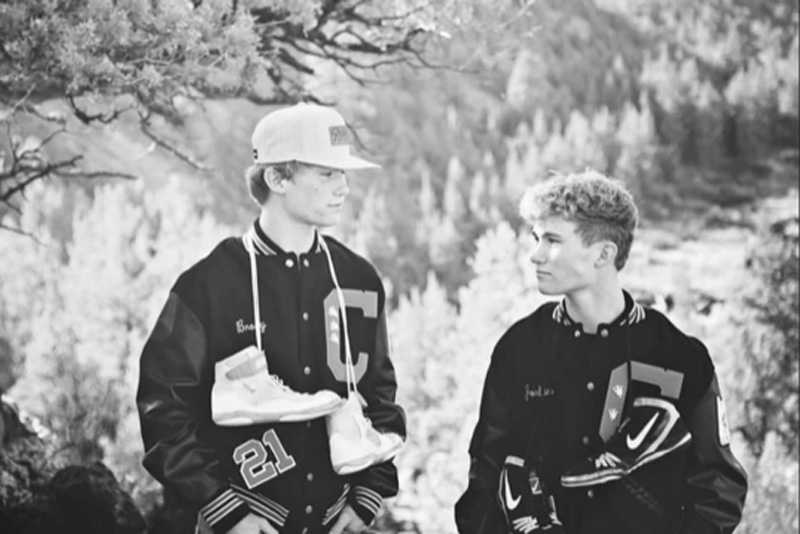 Brody and Jordan are both very good at looking at each other, even if they don't agree on the other's good looks

[Editor’s note: The idea behind “Alphabet Stories” is to write one noteworthy athletics-related story about each OSAA-member school. We started with Adrian HS on Sept.18. Today’s story, almost seven months later, is about Culver High School. The goal is to write two per week all the way to Yoncalla! While we will be relying upon athletic directors to furnish story ideas, anyone may offer suggestions by emailing [email protected]]

Culver senior Jordan Piercy started wrestling when he was in the fifth grade. On the smaller side, Jordan eschewed other sports, like football.

“Size is a big factor and I’ve never been able to win the size battles when it comes to hitting and I hate losing,” he said. “Wrestling just made an impact on me that other sports and athletics hadn’t done yet.”

“He’s been my drill partner ever since,” Jordan said.

Similar in size to his brother, Brody had been searching for the right sport for him and found it on the mat.

“I was never big enough to hit home runs in baseball, dunk in basketball, or plow through kids in football,” Brody explained, “but wrestling gave me the opportunity to show my athleticism without size being a factor.”

When the Piercys got to high school, they helped Culver extend a rich wrestling tradition that has seen the Bulldogs win 12 OSAA 2A/1A state titles over the past 14 years. Brody has placed third at State three straight years, twice at 106 pounds and, in 2020, at 113. Jordan scored points at 106 at State as a freshman and might have been on the podium had he not lost to Brody, 5-2, in the consolation semifinals.

It was both a fierce and friendly battle, but not an unusual one.

“They are practice partners and oftentimes end up going 100% live wrestling from start to finish, no matter what drill they are doing,” assistant wrestling coach Robert Frasier noted.

“We have been drill partners since the beginning so we are close friends on the mat,” Brody said. “We’ve had our fair share of fist fights during practice but usually are over it the next day when practice time rolls around.”

“We have been practicing together for our entire careers,” Jordan added, “I’ve never had to find a partner. It’s been very helpful to know that. And we could always wrestle no matter where we were.”

Off the mat, the twins are strong students who display outstanding character.

“They are very solid, respectful, and hardworking,” Frasier said. “Not only are they respectful, but they are respected because of how they carry themselves in every room they walk in.”

Upon graduation, both will continue their wrestling careers in college, Jordan at Cleary University in Michigan and Brody at New England College in New Hampshire. They’ll be apart for the first time in their lives, but will remain the closest of friends.

“He’s definitely my best friend and my lifeline for sure,” Jordan said. “We have been through everything together and have made close to every memory together.”

“He’s by far my best friend,” Brody said. “Loyal like a dog. I honestly couldn’t imagine my life without him. He pushes me to be better in every aspect of life, especially in the mat room, because I want to have the bragging rights at home. Overall, without him, I wouldn’t be half the person I am today.”

The twins agree on a lot of things. They share similar morals and values off the mat and have similar goals on it. Both are hoping for a senior season of wrestling, which is on hold currently due to the coronavirus pandemic. Jordan and Brody have both gotten bigger and stronger and are looking to find weight classes separate from one another, where each can shine. Both said they have unfinished business.

“I want my shot at a state title and the only thing keeping it from me is something out of my control,” Jordan said. “I also want to win a team title."

“I’d say a state title is one of my dreams,” Brody added. “But what I really want is the blue trophy back in Culver.”

There is one thing, however, that Jordan and Brody cannot agree on, by the looks of it.

“I thing Brody is a little uglier than I am, but that’s just my point of view,” Jordan said.

Jordan wrapped the interview for this story by saying, “Thank you,” and “We are grateful for the opportunity.”

“Oh wait! One last thing…Jordan’s uglier than I am.”