Boys soccer: Hawkins comes full circle back to La Salle Prep
Tweet
Monty Hawkins leaves Sherwood to return to the Falcons, a team he led to three state championship games in the 1990s
May 30, 2021 by Jerry Ulmer, OSAAtoday 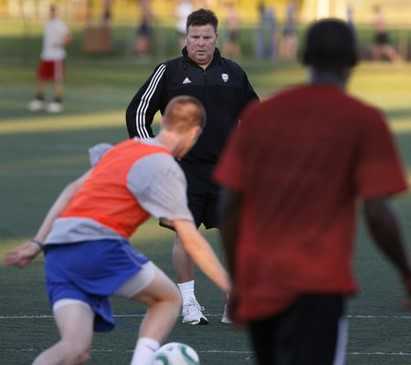 Monty Hawkins is going back to the future.

Hawkins, the boys soccer coach at Sherwood for the past 14 seasons, has returned to La Salle Prep, where he coached the Falcons to a state co-title in the 1990s in his first high school head coaching job.

“My heart is in some ways attached to La Salle because that's where I started,” Hawkins said. “I was just learning how to start coaching. We were in three state finals. We were a relevant program back then, and they've maintained it. It's kind of a nice circle, to come back around and do it.”

“In 6A, we were kind of on the outside looking in,” said Hawkins, who owns Tualatin Indoor Soccer and holds a U.S. Soccer A coaching license.

Altshuler stepped down after guiding La Salle Prep to the 5A title in 2019 and was replaced by Merlin Triplett, who went 7-2-2 this year before he and the school parted ways.

“I started talking with Chris, and I go, 'I might just throw my name in the ring,'” Hawkins said. “He told me I'd be a strong candidate. I went and met with the leadership, and they offered me the job. And I said, 'OK.' It was like a whirlwind. You know how when you're not looking for something, and it happens.”

“The prospect of having them in the soccer program, it's obviously something that piques my interest,” Hawkins said. “I'm excited about what La Salle has going on now, and looking forward to the future, if my kids get into school there, I'll be around then. But that's more of a motivator that was on top of everything else.”

Hawkins said he needs to get up to speed on the players in the La Salle Prep program. Twelve of the 18 players on the varsity roster are eligible to return, including standouts Mizael Harris and Quentin Strange, who will be entering their senior and junior seasons, respectively.

Hawkins said he watched the Falcons' final-week games against Central Catholic and Lake Oswego and came away impressed.

“They certainly didn't look like they were 5A and the other team was 6A, that's for sure,” Hawkins said. “In those two games, every player on the team looked pretty good. Walking into it, I had no idea what was in their arsenal.”

Many of the names and faces will be different, but after going back to the school, Hawkins said that much remains the same at La Salle Prep.

“This is the same place. I felt like I was in a time capsule,” he said. “La Salle is like a family that I'm reconnecting with after 26 years. It just happened so quick. It wasn't something I had planned on.”