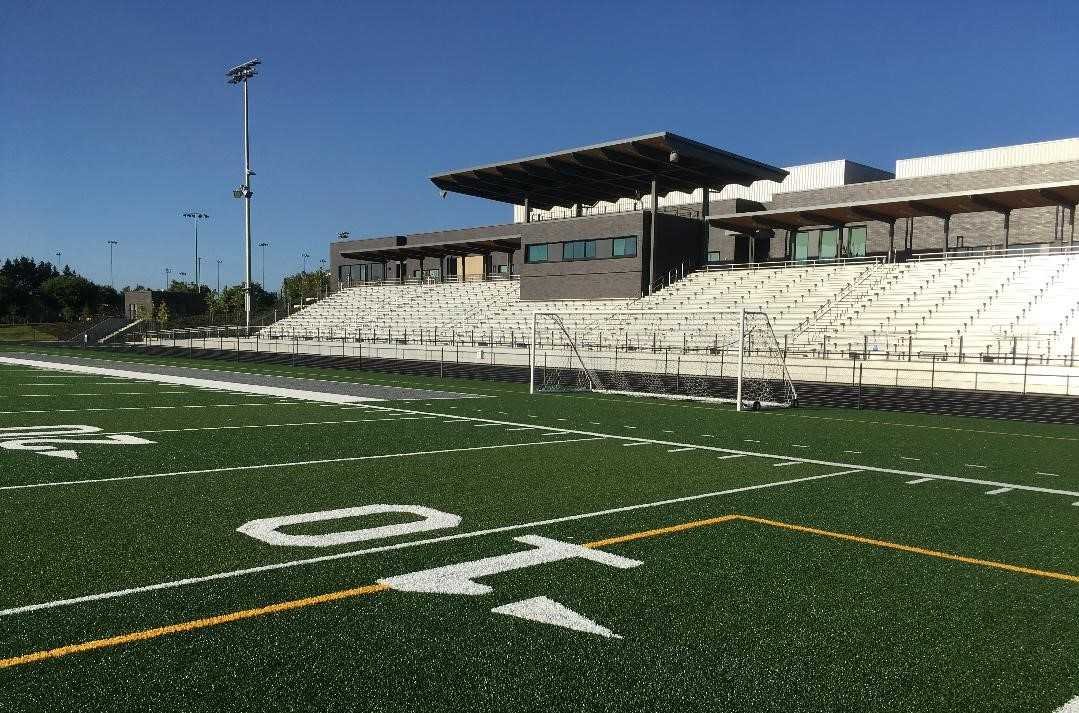 The football stadium at Nelson High School in Happy Valley is ready for the season opener Sept. 3 against Barlow.

The heartbeat of a new high school is growing stronger in Clackamas County.

Students who will be the first to attend Nelson High School – an equal split with Clackamas High School, four miles to the west – began summer workouts at the new facilities in Happy Valley last month.

The sight of players and coaches decked out in silver-and-black Hawks gear has been heartening for athletic director Vicki Nelms, who left the same post at Clackamas to get the new program off the ground.

“It was exciting to see the kids when they first walked in, the first day, how they felt about it, and how excited they were about the facilities,” Nelms said. “It's going to be hard for a lot of them, leaving Clackamas. I think when they get in, and they're working with the coaches and they see the facilities, it's like, wow, it's nice.

Nelson, which will join Clackamas as a member of the 6A Mt. Hood Conference, will compete on the varsity level in all sports in 2021-22. The Hawks will have primarily freshmen, sophomores and juniors, but about 75 seniors who live in the Nelson enrollment area have decided to leave Clackamas for the new school.

“The first year is going to be a little rough when you don't have that many seniors here,” Nelms said.

Nelson and Caldera, a 6A school that opens in Bend this year, will bring the total of schools in the highest classification to 55. They are the first schools to open in 6A since Mountainside in 2017.

The North Clackamas School District anticipates Nelson and Clackamas to have enrollments between 1,400 and 1,600 in 2022-23. Given the dramatic growth of the Happy Valley area, Nelson could outgrow its building within five years, according to Nelms.

Nelson is on the site of the former Rock Creek Middle School, which was expanded to accommodate a high school. The new construction includes a football stadium and gym.

The football stadium, oriented north-south, has a home grandstand and press box facing west with bleachers on the opposite side. The artificial turf field has black end zones – one scrawled with Nelson, the other with Hawks – and a Hawk logo at midfield. It is surrounded by a black track.

“It's not a true bowl, but ground level is where you enter the press box, and the bleachers are down below,” Nelms said.

Hood View Park, a popular artificial-turf softball and baseball complex adjacent to the campus, will become the Nelson Sports Complex on Aug. 16. The North Clackamas School District has taken ownership of the facility, which had been operated by the North Clackamas Parks & Recreation District.

Fields 1 and 4 of the complex have been upgraded with new artificial turf and scoreboards to use for varsity baseball and softball, respectively. The district plans to replace the turf in Fields 2 and 3 next summer.

The fields, popular for youth and recreational leagues, will continue to be available for community use.

“We've got people who are renting from us ready to start this fall season,” Nelms said. “It will still continue to be a highly used area, but Nelson, and anything for the district, would come first before any outside groups.”

The gym is similar to the one at Clackamas, featuring high windows that allow natural light. Wrestlers will have their own practice room. The tennis courts east of the building have a view of Mt. Hood.

Cross country runners, who often trained on streets near Clackamas, will have more natural paths. The school is next to farm land and close to Hidden Falls Nature Park.

Nelms said Nelson has what it needs to get started, even if she is dealing with minor issues such as back-orders on soccer balls and waiting on additional equipment for the weight room.

“Because of the pandemic, there have been shortages and time delays on different supplies and things,” she said. “The coaches all knew that not everything is going to be here. You've got to be willing to punt.”

The Hawks open their football season with a Sept. 3 home game against Barlow.