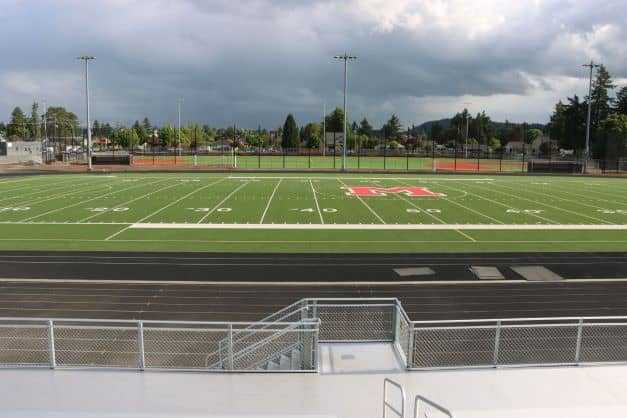 An artificial-turf baseball and softball complex is on the opposite side of McDaniel's stadium. (Portland Public Schools)

After a two-year absence, McDaniel athletes and coaches finally will get to test some of their new facilities next week when they return for workouts at the rebuilt northeast Portland high school.

Considering the new digs, and the school's new name and mascot – Mountain Lions – it's a radically different world at McDaniel, where teams were known as the Madison Senators since the school opened in 1957.

The athletes and coaches are adjusting to the changes, but also don't want to cut ties with the past. They will try to strike a balance between the new identity and maintaining a connection with those who came before them.

“The cool part is there are so many great ties from Madison in this transition to McDaniel that I think people will be aware of when they walk through the new building,” Kelleher said. “There were great traditions that were established at Madison, and you want to transition those to the new school.”

Kelleher said several tangible nods to the school's history are in the works, but some are not ready to be revealed. One notable feature is remnants of the old bleachers repurposed as wall art in the new gym. Also, pieces of the old gym floor also have been incorporated into the new building.

“There are a lot of character pieces that tie in the history,” Kelleher said, “and they keep those traditions and those connections alive with the past, and blend it in with th e new school. There are a couple that aren't done yet that are really special.”

Construction on the new high school, part of a $790 million bond that was passed in 2017, began after classes ended in June 2019. Students attended classes at the former Marshall High School campus in southeast Portland for six months before the coronavirus shutdown in the spring of 2020 led to distance learning.

Before athletes returned to official competition in late winter, the school board voted in February to change Madison's name to Leodis V. McDaniel, in honor of a former principal at the school.

“He was huge into athletics,” Kelleher said. “He was a huge part of the community. To have our school named after someone who worked at the school, who was beloved, who had huge ties to the community … that's a great name if you're making the transition.”

The school is keeping the traditional colors – red and Columbia blue – but opted to change the mascot to Mountain Lions. A new logo is yet to be finalized.

“We're still in the process of tweaking the athletic logo to get it exactly where we want it,” Kelleher said.

The outdoor facilities are ready for use. The stadium field and track are unchanged, but a new metal grandstand has replaced the old bleachers. The stands span between the 30-yard lines, a change from the old stands, which extended to the end zones.

A major upgrade was the addition of an artificial turf baseball and softball complex on the opposite side of the stadium. The fields not only are a boon for those programs, but they provide extra practice space for sports such as soccer and football.

“It's by far the best we have in the district as far as football, baseball softball,” said Jeff Peeler, assistant athletic director for the PIL. “All turf and all lit.”

Kelleher said “the possibilities are endless” for how the school can use the fields.

“It's a big emphasis of pride among the coaches, the kids, the faculty and the community, to have true facilities that I would say are comparable to suburban facilities,” Kelleher said.

“Being in the PIL, we have to make the most of the space we have. We're very landlocked. We took advantage of that and fit everything in the best we could. People are just going to fall in love with it.”

The new gym, similar in size to the old one, has windows to allow for natural light. The school also added an auxiliary gym, something it previously lacked. Construction continues on the indoor facilities, but Kelleher is hopeful that they will be completed by the time volleyball tryouts begin Aug. 16.

McDaniel is part of the massive renovation project by Portland Public Schools. Roosevelt, Franklin and Grant already have been renovated. Lincoln's rebuild is in progress, and with McDaniel finishing up, Benson students are moving to the Marshall campus while their project begins.

Jefferson, Cleveland and Wells will be addressed in coming years.