Wrestling: CV's Rowley building on international success
Tweet
A silver medal at the Cadet World Championships is another big step forward for the perennial 5A champion from Crescent Valley
August 4, 2021 by Jerry Ulmer, OSAAtoday 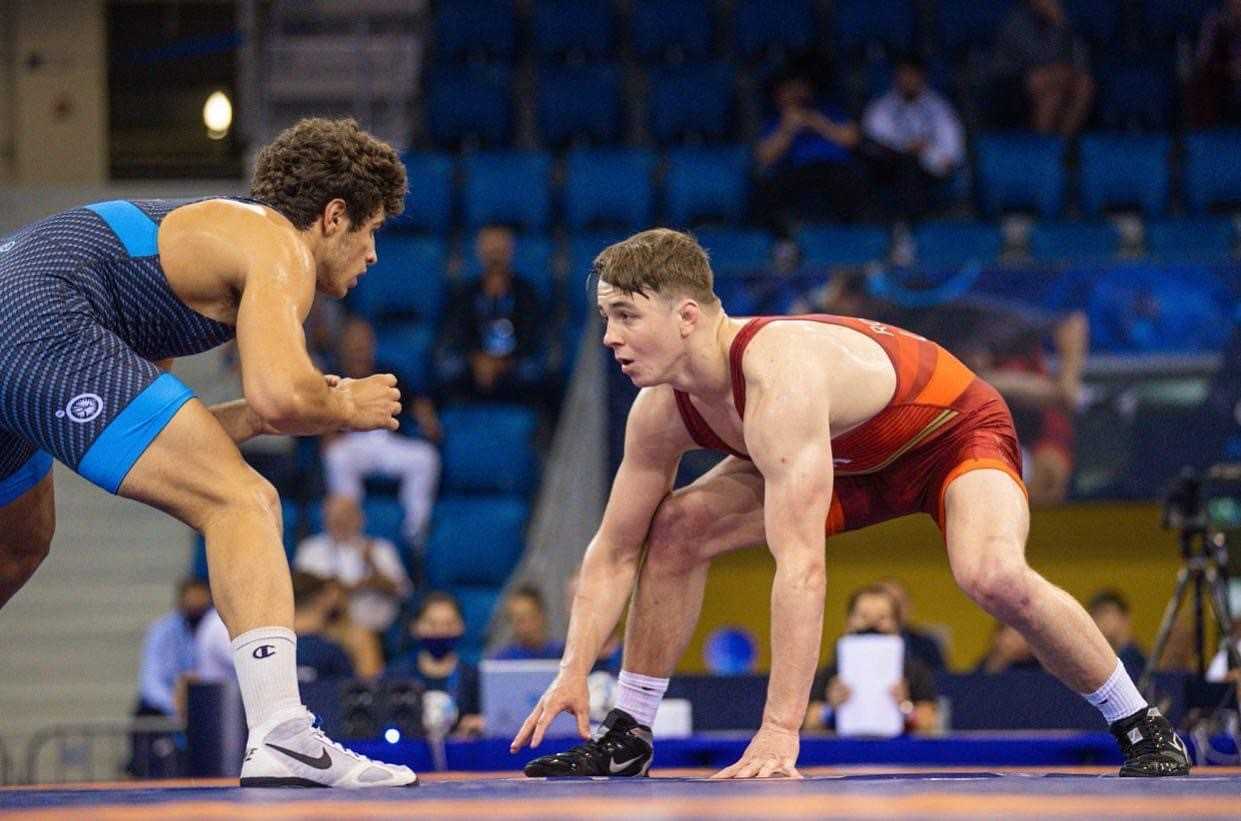 James Rowley (right) has won bronze and silver medals in his two trips to Budapest for the World Championships. (USA Wrestling)

Crescent Valley wrestler James Rowley is slowly making a name for himself on the international stage.

It is the highest finish ever for an Oregon wrestler in the cadet tournament. Marshfield's Travis Wittlake won the bronze in 2016 and Crescent Valley's Chance Lamer finished fifth in 2018.

“It felt really good to be among that group,” Rowley said of Wittlake and Lamer. “Getting the silver, and bringing it back to Oregon for the first time was really awesome.

“I felt really confident. I felt like my levels elevated a lot. I felt like I learned a lot, too. Overall, it was a really good experience. It definitely is going to push me a lot in the future.”

Rowley, who is heading into his senior year, won OSAA 5A titles at 145 as a freshman and 160 as a sophomore and finished first at 185 in the 5A culminating week tournament this year. He has lost only once in his high school career, a 4-2 decision to Crook County's Kyle Knudtson in 2020 when he wrestled up two weight classes.

Rowley made Team USA for a second time by winning the World Team Trials in April in Wisconsin. He dominated the Trials, allowing only four points in seven matches.

He said wrestling with Team USA in Budapest in 2019 “definitely helped a lot” when he returned in July.

“I had already been there, already traveled and been with the coaches and stuff,” he said. “In Budapest last time, that kind of fueled me, definitely training up to the next World Team because I wanted to do better than last time.”

Rowley said he felt good about his performance considering the cadet bracket was much stronger than U15 was two years ago.

“I wrestled really well,” he said. “I had a couple really tough wins against really good guys, some of the best competition I've faced. So overall I'm really happy. The finals match was a tough one to give up, but I'll learn from it.”

Rowley defeated Mustafagadzhi Malachdibirov of Russia 10-6 and Oleksandr Mamrosh of Ukraine 8-6 to reach the semifinals, where he handled Gabriele Niccolini of Italy 12-2. He lost to India's Sagar Jagland 4-0 in the final.

“He was very good at a control tie, the underhook,” Rowley said of Jagland. “And that's all he really had. He didn't have any shots, really. He never shot on me, never took me down. He just rode me out.”

Rowley said the loss revealed that he needs to improve his hand-fighting.

“First round was a little slow, and in the second round I started to hand-fight harder, but it was too late,” he said. “That's kind of what cost me the match. I didn't think he was as technically sound as the first two guys I wrestled, but he was really good at the one thing.

“We worked on it in practice and in the warm-up, but nothing can really simulate what it is actually like in competition. So now I have that feel. I'll go back and I know what to expect next time.”

Rowley came from behind to defeat Malachdibirov, led wire-to-wire against Mamrosh and dominated Niccolini. He said he had some trepidation about facing a Russian in his first match.

“As an American, that's always something you're a little worried about,” he said. “That was one of the good wins to get, especially against a powerhouse like Russia. The second match, that guy was a Euro champ, so it was good to beat him.”

MatScouts ranks Rowley No. 2 in the nation at 170 and No. 12 pound-for-pound. His next big test will come in September in the Who's No. 1 national tournament, sponsored by FloWrestling.

Rowley can cap his Crescent Valley career with a fourth individual title and fourth team championship. The Raiders won OSAA 5A titles in 2019 and 2020 and blew away the field in the 5A culminating week tournament this year, boasting 10 champions.

He is proud of how Crescent Valley has developed into a state power.

The Raiders and 6A champion Newberg discussed scheduling a dual meet last season, but it didn't materialize.

In the meantime, Rowley is sorting through his college options. He said he has offers from Oregon State and Navy and high interest from many other Division I programs, including Purdue, Virginia Tech, Virginia, Wisconsin, Oklahoma, Oklahoma State and Iowa State.

“I think they're all pretty serious about it, so it's just going to be me deciding where I want to go,” he said.