Girls soccer: Marist Catholic prevails in battle of No. 1s
Tweet
The Spartans, the top-ranked team in 4A, go on the road for an impressive 2-1 win over Catlin Gabel, No. 1 in 3A/2A/1A
August 31, 2021 by Jerry Ulmer, OSAAtoday 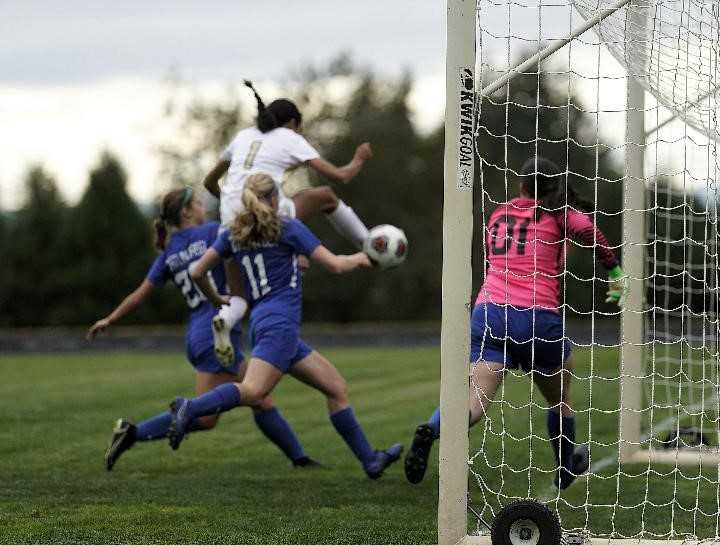 PORTLAND – Senior Madison Fuller scored the go-ahead goal in the 58th minute and Marist Catholic survived a late surge from Catlin Gabel to escape with a 2-1 road win in a season-opening battle of top-ranked girls soccer teams Monday.

The Spartans, runners-up in the 4A tournament in 2019 and the 4A Showcase in the spring, were voted No. 1 in the preseason OSAAtoday 4A coaches poll.

“You can kind of throw classification out of the window,” Schroffner said. “It was a very, very well-played, hard-fought match. That was a nail-biter, a real competitive game.”

“It was a big challenge. They have great players,” Fitzpatrick said. “It was a great way to start the season, just to have that momentum. Hopefully we can keep that going.”

Marist Catholic took a 1-0 lead in the 14th minute when freshman Ella Braunger booted a long cross off the crossbar and sophomore Cloe Chase volleyed the ball into the goal.

Catlin Gabel got the equalizer in the 53rd minute when junior Aanna Farhang took a pass from junior Grace Mueller inside the box and hit a left-footed shot into the right corner of the goal.

The Spartans got the winner on a set piece five minutes later. Fuller scored on a header off a 40-yard free kick from sophomore Savannah Crawford.

The Eagles turned up the heat in the last 20 minutes but were unable to break through against the Marist Catholic defense, led by senior goalkeeper Tess Woodrum, center backs Fitzpatrick and senior McKenna Henderson and senior outside back Sydney Clark.

“There was a lot of pressure in the back, which is honestly really fun to play against,” Fitzpatrick said. “It challenges you. It was great to kind of get our chemistry back because that was something we were a little worried about. But I definitely think we worked well together and had good communication.”

It was a tough loss for the Eagles.

“I thought we created enough chances to get a result, it just didn't fall our way,” Catlin Gabel coach Chris Dorough said. “We got the ball in the box quite a bit, we just didn't have a product.”

Schroffner credited his back line for resisting Catlin Gabel's push.

“There was a very, very tense 20 to 25 minutes where we were holding on,” he said. “As soon as we hit that second goal, they really stepped it up. They were pressing quite a bit. I think all the girls were tired on both sides. But we played some very, very organized defense when we had to.”

Junior midfielder Paige Meador was key in holding the Spartans together, according to Schroffner.

“She was just everywhere as far as plugging the holes and helping back on defense, and helping our counter-attacks,” he said.

“We have a lot of pace up top,” Schroffner said. “We're able to stretch them. It kept them honest. We had the pace, I felt, to beat them with our speed on their back line.”

“We lost some good forwards, but we've had a lot of people step up,” Fitzpatrick said. “We have some really good incoming freshmen. We have more speed up top. And I think we're going to have more communication in the midfield.”

Catlin Gabel is putting together its pieces after losing seven starters from last season.

“We're a young team, so I was pretty happy with our performance overall,” Dorough said. “I knew playing Marist out of the gate was going to be one of our better games. I knew that they would put us under pressure.

“I don't mind an early-season loss for some motivation. I think that Marist team is going to do quite well in 4A this year. I'd be quite surprised if they didn't make a run.”

Marist Catholic is playing the season without standout senior defender Anna Watts. A potential state player of the year candidate, Watts suffered a torn ACL during a team scrimmage two weeks ago. She had surgery Monday afternoon and was able to join the team by video for its postgame shout.

With Watts out, the presence of Fitzpatrick – who missed much of the spring season with a back injury – is critical.

“Anna goes down for the season, but Reese steps up to lead that back line,” Schroffner said. “I wish we had them both. We'd have an amazing back line.”

Between wildfire smoke, COVID-19 protocols and injury issues, Marist Catholic has had plenty to overcome.

“We're just going to roll with whatever adversity is thrown our way,” Schroffner said. “To start, this win was really big mentally.”