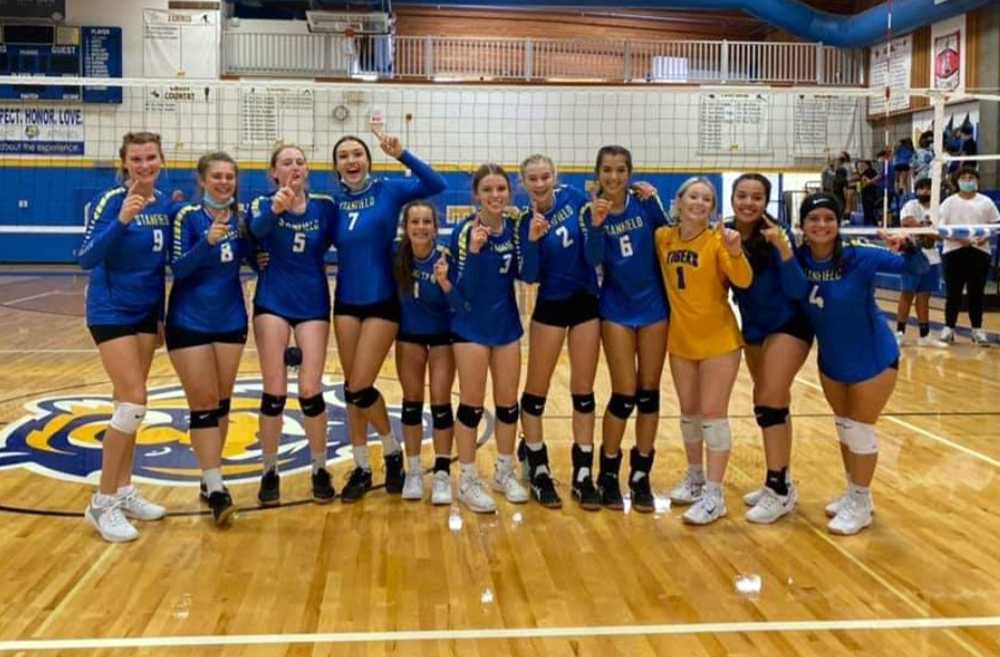 Stanfield volleyball has reason to celebrate after nine wins already this fall, seven more than it had the entire spring!

This is our second volleyball notebook of the fall 2021 season. Let’s get after it!

Stanfield won twice yesterday to improve to 9-2 in 2A. The OSAA’s computer rankings currently have the Tigers at No. 9. Not bad for a team that was 2-8 in the spring…

This is remarkable stuff!

Stanfield’s turnaround has been particularly impressive. Swept seven times in the spring, the Tigers have swept seven opponents in their 9-2 start and recently had a five-match winning streak snapped.

“We decided to use the Spring 2021 COVID short season more as an opportunity to develop and not worry about any postseason goals,” Stanfield head coach Blaine Ganvoa explained. “This was the consensus of both coaches and players, as we had few returning players with varsity experience from the previous season.”

Ganvoa said that the way Stanfield approached the spring relates directly to the success it currently is experiencing.

“It really highlights the hard work of our players and their willingness to be coachable and really aim to get better with every touch and just enjoy playing the game,” he explained. “Our daily primary focus is to have FUN and find the joy in the game, as this is what gives us all the right frame of mind to really improve our individual and team skills.”

Stanfield is taller across the front row this fall and the improved offense and defense at the net has been instrumental to the team’s success. So, too, however, has been the leadership of seniors Alexis Shelby, Katelynn Griffin, Jennifer Flores and Taylor Longhorn, along with junior setter Zuri Reeser.

Asked about expectations the rest of the year, Ganvoa was matter of fact.

“Our coaching expectations for the remainder of this season are still guided by the aforementioned values of FUN, hard work every touch, and playing for each other,” he said.

Unbeatens and thoughts on tournament formats

OSAA.org currently shows eighteen (“18”) unbeaten teams this fall, but that number is deceptive, as several of those teams have lost in pool play matches played only to two sets, which the OSAA does not recognize as an official match. This is a problem because seeding for the state tournament does not account for these pool play results; therefore making the rankings less accurate.

I advocate two solutions to the problem:

1. Count everything. If you split sets during pool play, it’s a tie. Other state associations do it this way. Why not Oregon?

2. Change the tournament format. Many tourneys are 24 teams played in six pools, with the pool winners and best two second-place teams advancing to the championship bracket of eight. Because four-team pools require more time and tournaments are played only on Saturday (as opposed to Friday-Saturday like most states), pool play matches must be shortened to two sets to complete the competition in one day. Imagine, instead, a 24-team field that is eight pools of three. You can play best-of-three matches and have all pool winners advance. Voila! All you would need are two additional courts.

Molalla lost in the Silver Bracket semifinals at the Cascade Tournament last Saturday. That’s not bad, considering the team was missing five players, only one because of injury. Molalla was also nominated for a Sportsmanship Award by the officials at the tournament. “I know I have great kids, but it's always nice to see them be recognized for doing great things by other people,” noted head coach Lauree Nelzen…

5A Crescent Valley won the Tualatin Tournament on Saturday. Unranked in the pre-season coaches polls, the Raiders edged 5A No. 2 Wilsonville in the semifinals and avenged an early-season defeat to Oregon City by downing the Pioneers in the championship match. Bella Jacobson led the hitting effort, thanks to sweet dishes from Kam Mitchell. Kara Paterson was a defensive fiend.

“I received many comments on how much fun this team is to watch, which I totally agree with,” said CV coach Troy Shorey. “The thing I love most about this team is they believe they are always in a position to win! They play to the very end, every time with no regrets.”

In this space, we will recognize “smarty-pants” volleyball players, those who have an unweighted GPA of 3.9 or better or a weighted GPA above 4.0. Here are the Mensa nominees we received this time around:

Any volleyball coach may add someone to the list by emailing [email protected], putting “Mensa” in the subject line and providing information in the manner shown above.

In this space, we list those players, in the current senior class and younger, who have made a commitment to attend a college or university of their choice and play volleyball.

Any volleyball coach may add someone to the list by emailing [email protected], putting “College commitment” in the subject line and providing information in the manner shown above.