Girls soccer: Senior-led North Eugene has 'fire in their eyes'
Tweet
The veteran Highlanders believe they have all the pieces and motivation to make a run at the program's first state championship
September 28, 2021 by Jerry Ulmer, OSAAtoday 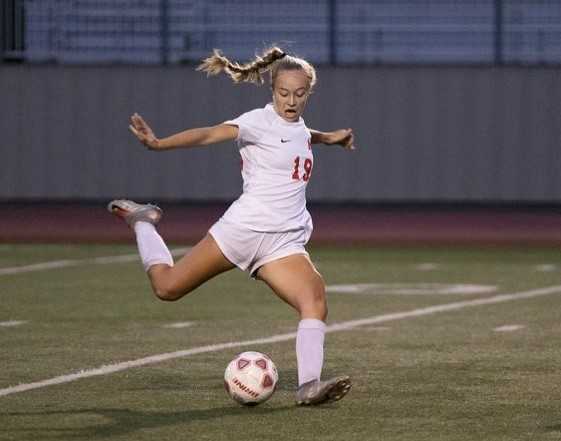 Brandy Wormdahl has been coaching girls soccer long enough to know what a state contender looks like.

Since taking over as North Eugene's coach in 1996, she had has eight state quarterfinal teams, including four that reached the semifinals and a 5A runner-up in 2017.

So Wormdahl should be heeded when praising this year's team, which is ranked No. 3 in the OSAAtoday 5A coaches poll.

“We're deeper than we've ever been,” Wormdahl said. “I think they're very comparable to that 2017 team, as far as the talent level and all the personalities that you kind of need.

“They definitely have that fire in their eyes. They want to get as far in the tournament as they can. We've got it on our calendar. We know the date of the state final.”

The Highlanders lost in the quarterfinals in 2018 and the semifinals in 2019 and had high hopes for last season, but didn't get a chance at a playoff run due to the COVID-19 crisis. Now, with 10 starters back from a team that went 7-2 in the spring, they believe it's time to chase after the program's first state title.

“They have all the qualities you need in order to make a state-title run, if we can stay healthy,” Wormdahl said. “But I know you've got to be a little bit lucky.”

North Eugene has started strong, winning its first six matches by a combined 22-2. The Highlanders won 2-0 over No. 6 West Albany and 4-2 at Marist Catholic, ranked third in 4A.

The win over former Midwestern League rival Marist Catholic (5-1-1) on Sept. 13 showed the team's grit. The Highlanders traded blows with the Spartans in an electric first half – leading 3-2 on goals by senior forward Avery Wormdahl, senior defender Lauren Becraft and freshman forward Kolbi Priaulx – and protected their lead in the second half, getting an insurance goal on a header from Becraft in the 77th minute.

“It was an exciting game to watch,” Brandy Wormdahl said. “It was a good win because we know they're a good team. They should vie for a state championship this year. Things kind of clicked for us, and it helped us to feel like, 'OK, things are kind of coming together.'”

North Eugene got past West Albany (4-2) on Sept. 2 on two goals by junior Emily Johnson, one off a corner kick and one on an assist by senior forward Ashley Hart.

The Highlanders had to scrap for a 2-0 home win over Crater (0-3-2) on Saturday. Freshman midfielder Makennah Hobbs converted a corner kick by Avery Wormdahl and Hart got the second goal on an assist by Becraft.

Hart has a team-high six goals and three assists, but North Eugene's attack can come from just about anywhere. Brandy Wormdahl said the players' unselfishness makes them especially dangerous.

“We've had quite a few different kids scoring,” Brandy Wormdahl said. “These kids are just great teammates. They're really supportive of each other.

“They're pretty fit and they keep coming at you. They're fast and they just play so well together.”

Of the team's eight seniors, five have started since they were freshmen in Hart, Becraft, Wormdahl, midfielder Olivia Hoskinson and defender Natalie Hobbs. Senior midfielder Chloe Wallace is a third-year starter.

Hart was a Midwestern League second-team selection as a freshman but was set back by an injury as a sophomore. She is looking to finish strong before heading off to a college career at Oregon Tech.

“She's a first-team all-state kind of player,” Brandy Wormdahl said. “When we need a score, Ashley's the one everybody is looking to. She gets a lot of attention in our games.”

Becraft, committed to Montana State Billings, was second-team all-league in 2019. Hoskinson is on track to be a first-team all-league player this season, according to Brandy Wormdahl.

“I call her 'The Magician,'” she said. “In the middle of the field, she's just amazing with the soccer ball.”

Avery Wormdahl, who led the team in scoring in 2019, plans in competing in gymnastics at Oregon, where her sister, Jordan, is a senior on the soccer team.

Before the Highlanders can think about the state playoffs, they need to take care of business in a tough Midwestern League that includes two other top-10 teams in No. 7 Ashland (3-0-3) and No. 8 Springfield (3-0-1). Since winning the league title in 2017, North Eugene has finished runner-up to Willamette in 2018 and third to Churchill and Willamette in 2019.

Brandy Wormdahl said that opponents “always get fired up to play us,” but her veteran team has a mental edge this season.

“They're determined and they're pretty passionate,” she said. “They don't quit on each other. They like to win.”