Girls soccer: Beaverton ends Jesuit unbeaten streak at 76
Tweet
The third-ranked Beavers improve to 10-0 by beating the No. 1 Crusaders 3-1, handing Jesuit its first defeat since 2016
October 5, 2021 by Jerry Ulmer, OSAAtoday 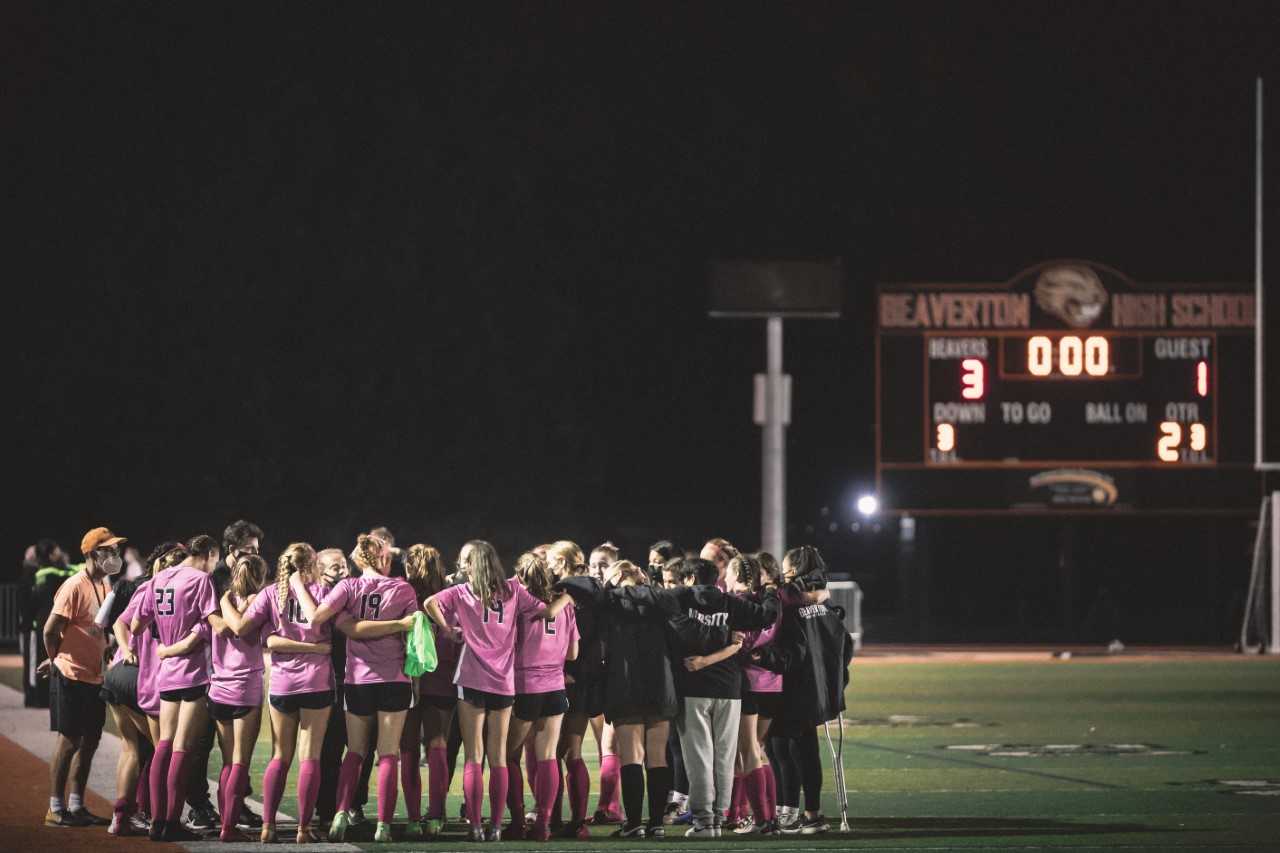 Beaverton huddles after a 3-1 home win over Jesuit on Monday.

Monday night, using a lineup that featured six fourth-year starters, that group propelled the Beavers to one of their biggest wins in the program's history.

“It's awesome to look at what we've been able to develop over the years and see it come to fruition,” said Kirwan, who is in her fifth season as the team's head coach. “This is something we've been working on for years, literally. We just knew it was going to happen at some point, you just had to be patient and know when the right time was.”

Junior Natalie Drotzmann and senior Lauren Ashe scored to give Beaverton a 2-0 lead at half. Senior Audrey Johnson extended the lead to 3-0 in the second half before Jesuit got a goal from junior Audrey Kent to make it 3-1.

It was the most goals scored against Jesuit since 2014. Entering the game, the Crusaders had allowed a total of 11 goals in the last five seasons. Jesuit beat Beaverton 9-0 in 2018 and 6-1 in 2019 before narrowly holding off the Beavers 1-0 in the spring.

“We're ecstatic. The girls were exceptional,” Kirwan said. “They're just so excited, very, very proud of themselves, considering the fact that they worked so hard and they've finally been rewarded for all their efforts.

“It's something that's kind of defining for us as a program, but at the same time, it kind of sends a statement that anybody can beat anybody on any given day.”

The 10 wins are Beaverton's most since 2016, when the Beavers went 11-5-1 and made the 6A quarterfinals. The team is winning with a balanced attack that is led by senior Emily Rice (nine goals) and Johnson (seven goals) and a defense that has allowed only six goals.

“What's really great is we have such strong numbers in the attack, and a very solid defense,” Kirwan said. “We have excellent players that are willing to be versatile. I think more so it's just an attitude. We're not a program that's going to fold under pressure. We're going to be a program that goes and competes.”

“We got some great classes after them, but there's something different about this group that you can't really replicate,” Kirwan said. “They've played together forever. This group is truly exceptional.”