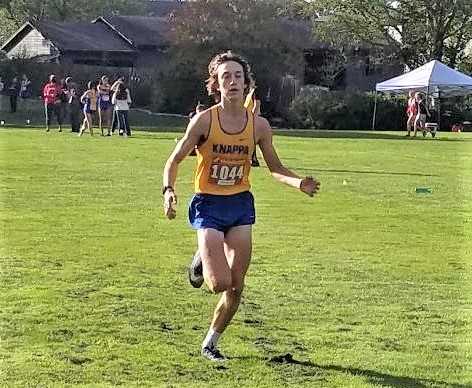 Knappa junior Isaiah Rodriguez took more than a minute off his time from last year at Twin Rocks. (Photo by Andrew Millbrooke)l

ROCKAWAY BEACH -- The Bigfoot Classic at Twin Rocks Friends Camp did not see any sightings of the mythical beast, but it did see impressive wins by Knappa junior Isaiah Rodriguez in the boys race and Neah-Kah-Nie senior Jordan White in the girls race.

Rodriguez won the boys race in 20:26.70 on the tough coastal course which has a waist deep river crossing where the runners cross over on a log. Astoria junior John Clement ran 21:35.70 for second, just ahead of Vernonia junior Evan Miller in 21:38.20.

Rodriguez was happy that his time was more than a minute faster than last year.

“I’m pretty happy about that,” Rodriguez said. ‘With these kinds of races I treat it as a tempo. I felt pretty good. I took it pretty easy, knowing that it was going to be a tough course.’

Rodriguez has seen consistent progression in his times, running 17:28 as a freshman, 16:45 as a sophomore and a personal record of 16:07 this year at the Nike Portland meet against the best runners in the state.

Rodriguez trained at the Steens Mountain Running Camp this summer and has competed at Ash Creek, Meriwether and Nike PDX.

“It’s nice running against bigger people, because they are a lot faster than I am,” Rodriguez said. “When I run with them, they tend to push me harder and that is when I hit my PR.”

Rodriguez knows he can run faster and wants to break the 16-minute mark this season.

“Nike Portland was a fun race,” Rodriguez said. “Overall it was a good race and 16:07 is where I am at right now. But I know there is more to come. I am going to keep working hard.”

St. Stephen’s Academy senior Colin Friend has the second best time among 1A/2A runners and beat Rodriguez by five seconds at Meriwether. Heppner junior Trevor Nichols has also run well this season. It will be a friendly battle when they meet at the state meet on Nov. 6.

“With the other top runners in the state being my friends I think that state meet is going to be fun,” Rodriguez said.