Football: Rainier back on track after unfulfilling spring
Tweet
The Columbians, who played only two games in the spring, look like 3A contenders again behind senior running back Stone Ware
October 18, 2021 by Jerry Ulmer, OSAAtoday 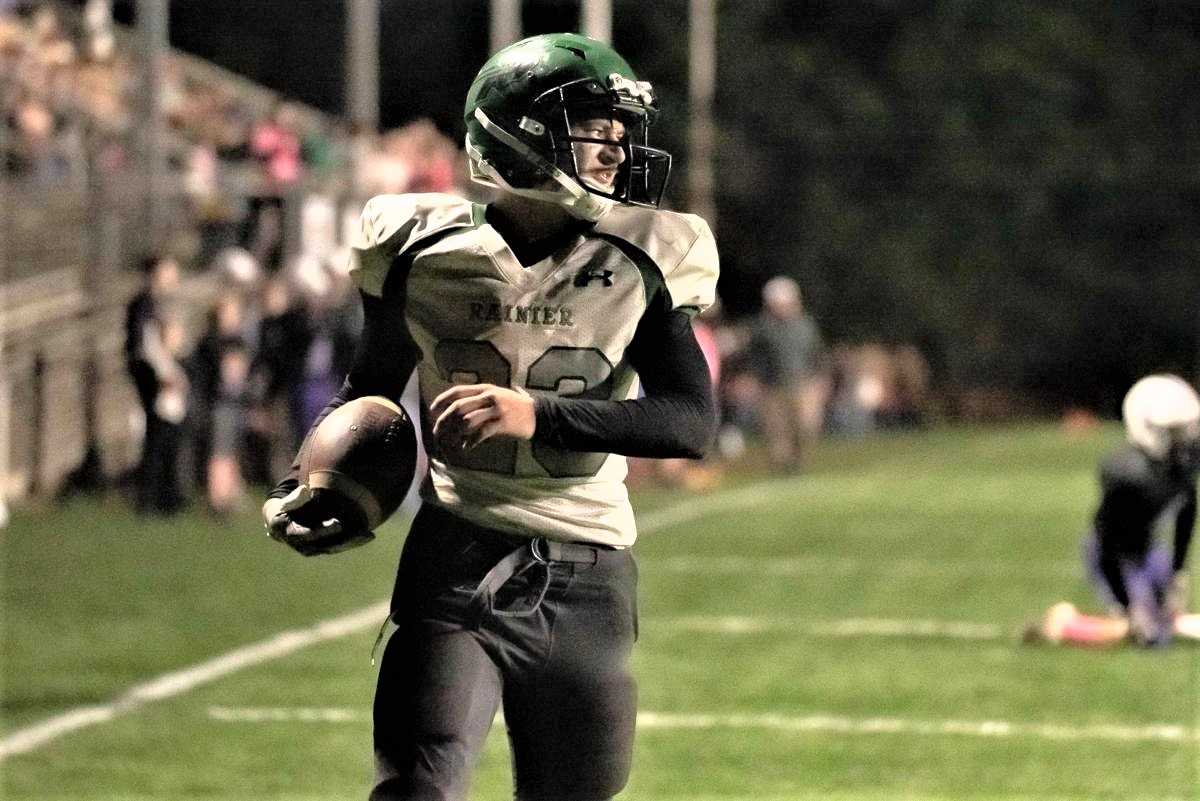 Rainier's spring football season was less than satisfying, to put it mildly.

The Columbians – who made the 3A final four the previous three seasons, winning the state title in 2018 – played only two games before their season was shut down due to COVID-19. That meant they had six months to stew about their final game, a 22-8 home loss to Warrenton.

So when Rainier, No. 1in the OSAAtoday 3A coaches poll, got a chance for payback Friday at No. 7 Warrenton, the Columbians made it count. They rushed for 429 yards in a 32-12 win, getting another big game from senior Stone Ware, who ran for 314 yards and four touchdowns on 22 carries.

“That felt great. I'm not going to lie,” Rainier coach Mike King said. “We had that one circled since last spring. We struggled to keep it out of our mind until last week. It's by far the best week of practice we've had in a while. Before the game, I didn't really have to say too much. They were pretty wound up.”

The spring now seems like a minor detour for Rainier (6-1, 3-0 Special District 1 East), which once again has its sights on a 3A championship. The Columbians are loaded with experience at the skill positions and have built a solid line.

“I knew we'd be good. The question was going to be up front, which normally isn't for us,” King said. “I think that's the biggest surprise, for me, at least, is how well the O-line has played. We don't have the depth we've had in the past, but we've got some quality there.”

With the line creating space, the 5-foot-9, 160-pound Ware has rushed for 821 yards and 12 touchdowns in five games, averaging 12.1 yards per carry. He has two 300-yard games, the other a 316-yard, five-touchdown performance against Amity. He also has nine catches for 175 yards and four scores.

“He's definitely dialed in,” King said. “He's running physical. He's the fastest kid on our team. He's elusive. He's also probably got the best hands on our team. He's a load for any defense to try to gameplan for. He's a complete back.”

Ware is more explosive than in the spring.

“He dropped a little bit of weight for this season because he felt like he was a little too heavy last season,” King said. “He dropped probably 10 pounds. He said he feels perfect now.”

Senior quarterback Kenney Tripp has rushed for 497 yards and four touchdowns and completed 19 of 31 passes for 321 yards and four scores with two interceptions.

Tripp, who started at slot and free safety as a freshman on the 2018 title team, is the seventh Tripp brother to play for Rainier and the sixth to play quarterback. His brother, Joey, was the quarterback in 2018.

Sophomore Derek Katon, who has rushed for three touchdowns, is the brother of David Katon, a two-time 3A first-team running back who rushed for four touchdowns in the 2018 final.

“He's a good one,” King said of Derek, who also plays outside linebacker.

Due to cancellations and forfeits, Rainier had a three-week layoff before picking up a game with 4A No. 1 Marshfield at Cottage Grove High School in Week 6. The Columbians lost 43-16 as they struggled against the passing of Pirates senior quarterback Dom Montiel.

“It was probably a loss at a perfect time for us, getting us ready for Warrenton,” King said. “You never want to lose, but there were some good things that we did in that game. For us to lose, and lose pretty big, it grounded us.”

The Marshfield game came together on short notice after Blanchet Catholic notified Rainier that it would be unable to play. The Columbians canvassed the state, looking for an opponent.

“There were a lot of schools that had openings, but nobody wanted to play us,” King said. “And Marshfield wanted to play us. We've never really been a team to duck anybody. We'll play anybody, anywhere, anytime. It's definitely not something I regret. It made us better and I think it will continue to make us better.”