Football: Much-improved South Albany returns to 5A playoffs
Tweet
The physical RedHawks, under co-coaches David Younger and Jeff Louber, have found a winning formula after an 0-6 spring season
November 1, 2021 by Jerry Ulmer, OSAAtoday 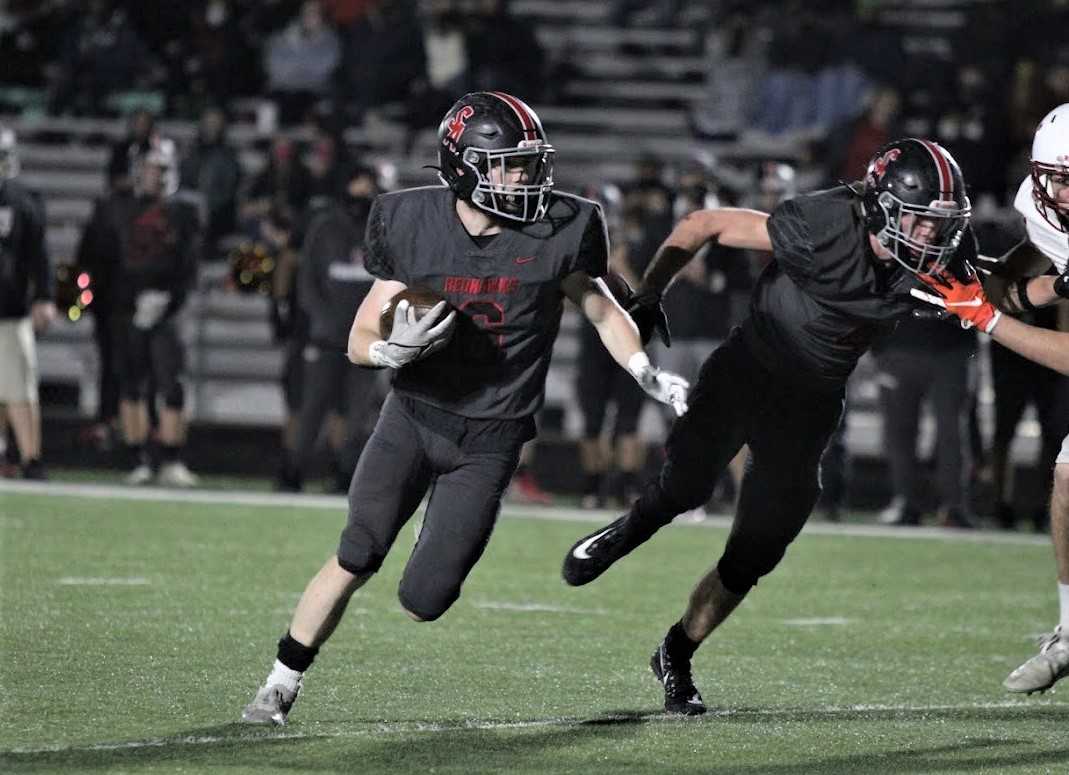 The last few seasons were a rough go for South Albany football.

After sharing the 5A Mid-Willamette Conference title and making the state quarterfinals in 2017, the RedHawks posted consecutive records of 2-7, 2-7 and 0-6. Concurrently, their offense became less productive each season, dropping to a 5A-low 6.0 points per game in the spring.

But much has changed this fall for South Albany. The RedHawks are more physical after bulking up during summer workouts, when they typically had about 65 players in the weight room each day. They have a much better handle on the hybrid flexbone triple-option offense that was installed in the spring.

And their coaching staff got a boost with the return of former head coach David Younger, who left for one season to assist at Willamette University but came back to the staff as co-coach with Jeff Louber.

As a result, South Albany (6-3) is heading back to the 5A playoffs, clinching a berth in the Mid-Willamette Conference on Friday with a 42-0 win over Crescent Valley.

“The kids were very excited,” Younger said of the mood after the game. “It was a fun atmosphere in that locker room. It was hard to get the kids out of the locker room that night. After we met with them, it took about 45 minutes to an hour to get them all out of the stinking locker room.”

“The West and the Dallas games are two games we wish we could have back,” Younger said. “I think we can make a dent in the playoffs just because we're very physical. We pride ourselves and tell our kids that we want to be the most physical football team in the state. Teams don't like playing us.”

Louber, the team's defensive coordinator since 2014, took over as head coach when Younger left after the 2019 season. The RedHawks took their lumps in the spring, but with nine starters back on each side of the ball, the 2021 season held promise.

Younger returned and resumed his role as the offensive coordinator. He ran a spread offense early in his seven-year tenure as head coach, averaging as much as 30.5 points per game in 2015, but the offense had sputtered in recent seasons, and he and Louber agreed that switching to the the triple-option was the right move.

“We were spread, no-huddle for a while, and the first few years it really worked,” Younger said. “But a lot of teams started doing that, and they were used to it.”

Younger simplified the offense in the offseason to make it easier to practice. The RedHawks have nearly quadrupled their scoring to 23.7 points per game.

“We run the ball with authority,” Younger said. “We want to be able to control the clock and get four yards a carry, and attack defenses.”

The offensive line – led by seniors Matthew Cobb II, Ramie Halbrook and Dave Marsh – has gelled. Senior running back Tyler Seiber has rushed for 852 yards and 15 touchdowns. And junior quarterback Kaden Younger, David's son, is developing a feel for the option.

The defense – featuring Seiber at outside linebacker and junior Max Louber, Jeff's son, at inside linebacker – has been solid in limiting opponents to 17.9 points per game. The RedHawks are the only team to hold Silverton to less than 28 points.

The coaching chemistry between Younger and Louber has been integral. They have developed a bond since meeting as assistant coaches at West Albany under Randy Nyquist. Younger landed the South Albany job in 2013 and added Louber to the staff the following season.

“It's really no different than it's been in the past,” Younger said. “Since we started working together, Jeff has always ran the defense, and I was on the offensive side. Our sons are best friends and Jeff and I are best friends, so it works out really well. There are no egos involved with the two of us.”

Said Louber: “It's been amazing. He's kind of like my brother. And I really missed not having him on the sideline the previous season. I feel like we got the family back together.”

Younger wanted to try college coaching, but Louber never gave up on trying to lure him back.

“Every time I saw him, or if I was thinking about it, I'd say, 'Let's do this. Let's finish what we started,'” Louber said. “We had to grind through a couple of seasons with really bad losing records in order to get to where we are.”

Younger said he “learned a ton” at Willamette, but liked the idea of coaching his son, recalling how he played for his father, Rob, at Sweet Home.

“I had a great experience playing for my dad,” said Younger, who graduated from Sweet Home in 1996 and later assisted his father with the Huskies.

Will they remain as co-coaches?

“We'll do it again next year, and we'll continue to do it,” Younger said. “It's a great fit. It's something that really works because we divide and conquer with the administrative duties. It takes some of the pressure off both of us.”