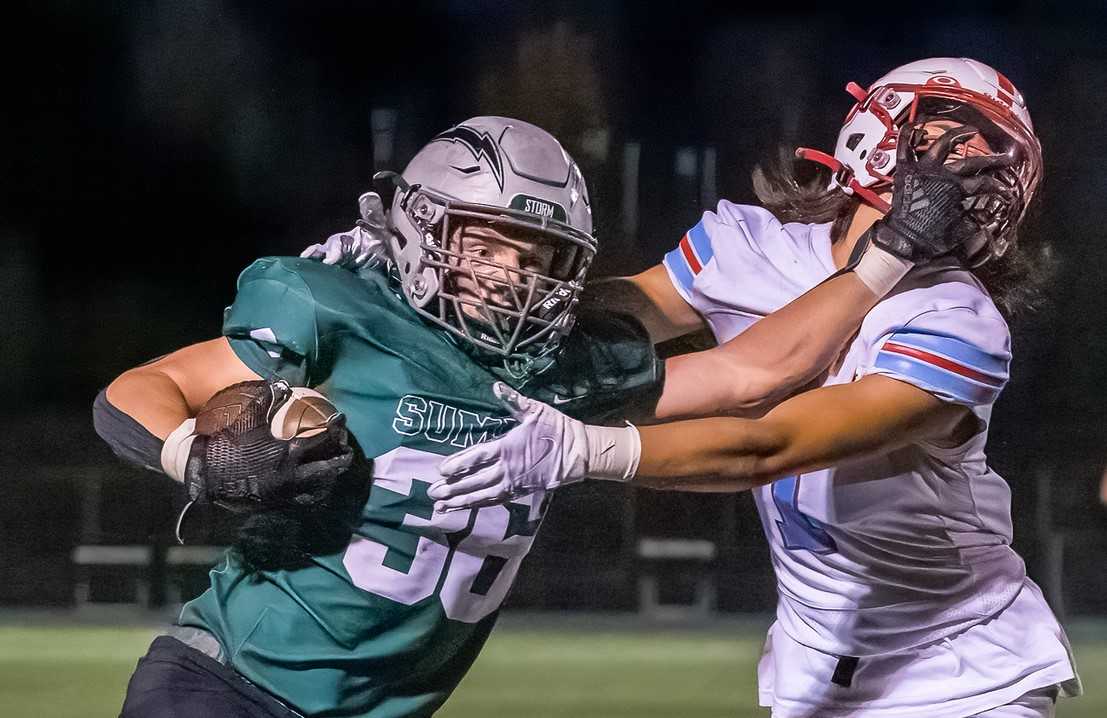 As the playoff seeding for 6A football shook out in the last few weeks, Summit coach Corben Hyatt could hardly believe his eyes.

Initially, Hyatt was hoping that his team could sneak into the top 16 and earn a first-round home game. But Summit found itself on the fringe of a top-eight spot, which would ensure the Storm of home-field advantage in the first two rounds.

“We thought we were going to be in that 9-10 range, but it worked out for us,” Hyatt said.

It also marks the first time any of the Bend schools – Bend, Mountain View and Summit – will be home for a playoff game since they all returned to the highest classification three years ago.

“We wanted to be the first school to make a team from the other side of the mountains come over and deal with elevation and cold, that kind of stuff,” Hyatt said.

Depending on how reclassification works out for the four-year time block that begins in 2022-23, this season might be Summit's last chance to make a mark in 6A. The OSAA's leading proposal would return the Bend schools to a 5A league with other central Oregon schools.

“There's just something different about being in 6A,” Hyatt said. “If you're a coach, you want to compete at the top. To be honest, I kind of want to stay in 6A, but it doesn't sound like we get a lot of say in that.'

However it works out, junior-dominated Summit is on the upswing. The Storm, which finished 2-7 in both 2018 and 2019 and went 3-3 in the spring, made dramatic improvement in finishing as the runner-up to West Salem in the Mountain Valley Conference.

“We've played maybe a little bit ahead of schedule for us,” Hyatt said. “Coming off the spring, I thought we'd be good, but maybe not as good as we have been. It's surprised me a little bit.”

Hyatt said the Storm isn't quite as talented as its 2015 5A title team, “but boy, they've got some grit and determination. Every week they come out and surprise me more and more.”

Summit's defense is leading the way, holding opponents to a 6A-low 10.8 points per game. The Storm has limited foes to seven or fewer points six times.

“They're just shutdown corners,” Hyatt said. “When you've got two corners that can just shut down the outside, it allows us to do a lot of stuff up the middle, from safeties all the way to the D-line.”

Powell, who has missed the last three games while nursing a sprained shoulder but is expected back Friday, has rushed for a team-high 528 yards and five touchdowns. Sophomore Sam Stephens, who has filled in for Powell, has rushed for 527 yards and three scores.

Hogan Carmichael, a 6-foot-5, 195-pound junior, is the returning starter at quarterback. He has completed 59 percent of his passes for 1,095 yards and 10 touchdowns with one interception. He has run for three scores.

Summit lost at Roseburg 23-7 in its opener – a game it trailed 15-7 in the closing minutes – and fell at West Salem 28-15. Hyatt said his team “played bad in all three phases” against West Salem.

“We knew that it was probably going to be for the league title, and our kids hadn't been in those situations,” Hyatt said. “I think the magnitude of the game got to them a little bit.”

Hyatt is wary of South Medford, which has lost to four teams ranked in the top 10 of the final OSAAtoday 6A coaches poll. The Panthers have momentum after beating rival North Medford 40-34 in the Black and Blue Bowl last week.

“Their record is not what a 2-7 team looks like,” Hyatt said. “We're kind of like, geez, this might be the best 2-7 team I've ever seen in my life. We've got to really be on our game to be successful.”

No. 9 Junction City (5-2) vs. No. 8 Cascade Christian (4-3) at Spiegelberg Stadium, 7 p.m.: Arguably the best first-round matchup for all classifications. Junction City led unbeaten Siuslaw 40-14 late in the third quarter last week and lost 41-40. Cascade Christian, which lost to Siuslaw 38-34 on Oct. 1, is coming off its most impressive result of the season, a 68-6 rout of Sutherlin.

No. 13 Philomath (6-3) vs. No. 4 Warrenton (6-2) at CMH Field, Astoria, 7 p.m.: Warrenton is battle-tested, losing only to Heppner 15-12 and Rainier 32-12, teams ranked No. 1in the OSAAtoday 2A and 3A coaches polls, respectively. Philomath is making its first playoff appearance in six years, when it won the 4A Oregon West Conference and reached the quarterfinals.

No. 9 Weston-McEwen (7-1) at No. 8 Toledo (6-3), 1 p.m.: Weston-McEwen, which has lost only to reigning state champion Heppner, hasn't appeared in the playoffs since 2015 and hasn't won a postseason game since making the 2011 semifinals. Toledo, a quarterfinal team in 2019, is riding a six-game winning streak since an 0-3 start.

Powers (8-0) vs. Mitchell/Spray/Wheeler (8-0) at Crook County HS, 12 p.m.: The two special district first-place teams collide in a six-man semifinal. Powers returned to six-man this season after playing in a 5A co-op with North Bend in 2019 and a 2A independent co-op with Myrtle Point in the spring. Mitchell/Spray/Wheeler has been dominant this season after going a combined 4-15 in six-man the last three seasons.