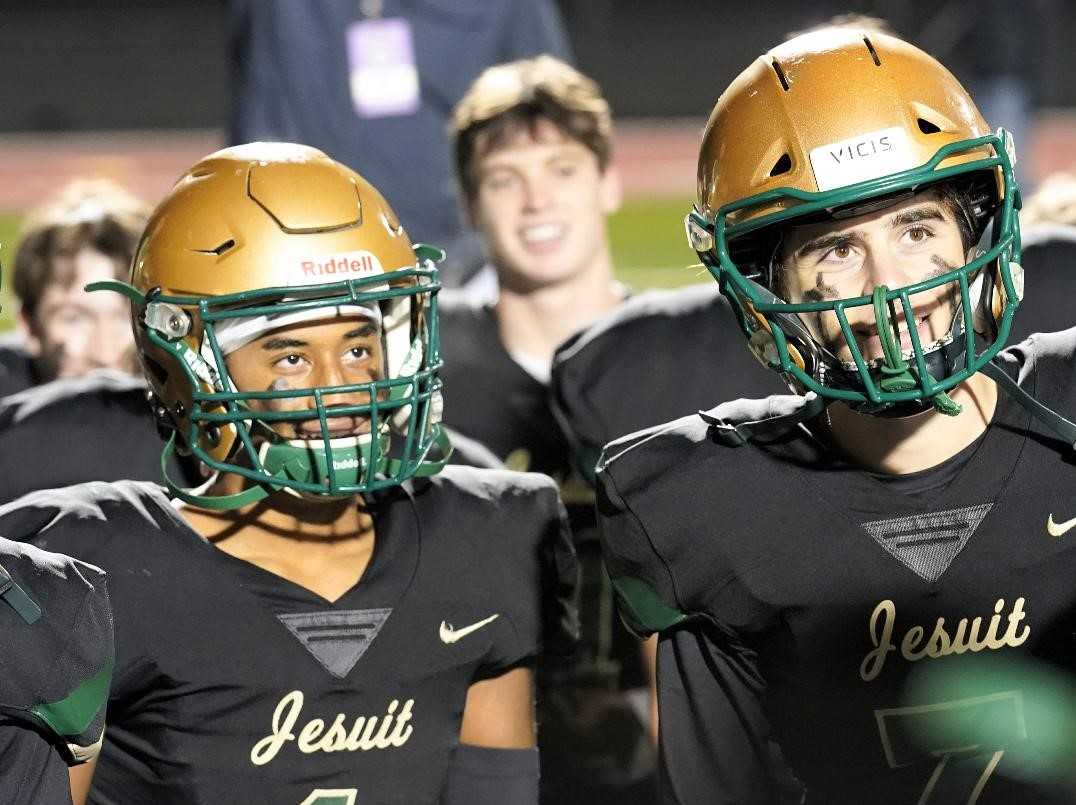 PORTLAND – The running game has long been the keystone at Jesuit, where “The Franchise” offensive line has paved the road to success under longtime football coach Ken Potter.

Now the Crusaders are developing a dangerous passing game to go with it, an unsettling prospect for opponents.

The sophomore combination of quarterback Jacob Hutchinson and receiver Jace Burton was on display Friday night as the ninth-seeded Crusaders rolled to a 62-6 home win over No. 24 Liberty in the first round of the 6A playoffs. The pair connected for touchdowns of 7, 51 and 79 yards as Jesuit built a 49-0 halftime lead and played out the second half with a running clock.

The running game remains the team's bread and butter, but the Crusaders (9-1) are showing that they can go up top, too. They advanced to the second round to face No. 8 Clackamas, which beat Sunset 31-18 on Friday.

Hutchinson and Burton did all of their damage in the first half before taking the rest of the night off against Liberty (6-4). Hutchinson completed 8 of 11 passes for 217 yards and three touchdowns, all to Burton, who had seven catches for 181 yards.

It continues a late-season trend for the 6-foot-2, 163-pound Hutchinson, who in the last five games has thrown 13 of his 14 touchdown passes this season. Burton (5-10, 156) now has six touchdown catches this season, five in the last three games.

“I think we're just kind of getting into a groove,” Hutchinson said. “At the beginning of the season, as a sophomore, I was kind of figuring out the offense still. Now we can kind of click during practice and get more repetitions that are a little bit more meaningful.

“Jace is just a great athlete. We've been friends for a long time. I think that helps with the connection.”

The chemistry is apparent.

“It's been great being his friend, and now he's my quarterback,” Burton said. “I think he's extremely talented. His arm talent is just absurd. He's a great quarterback. Good decision-making. I think he's going to be just so deadly. Only a sophomore. It's amazing.”

Hutchinson said his maturation at quarterback and the protection of the offensive line has allowed him to find Burton, the son of defensive coordinator Nigel Burton, the former Portland State head coach.

“It's definitely been open in the past,” Hutchinson said. “A lot of it's on me. I was kind of nervous at the beginning of the season, not taking my time, letting things develop. If I sit and let things develop, our play-calling, our offensive line, everyone just clicks if I just be a little more patient.”

Senior running back Michael Rincon – who rushed for 143 yards and 12 carries Friday, giving him 1,056 yards for the season – can see the growth in Hutchinson.

Hutchinson is keeping the success of the passing game in perspective, though.

“It makes us a bit more dangerous, but our running game, our offensive line just creates massive holes,” Hutchinson said. “And we have smart, athletic running backs that get the job done. The run sets up the pass.'

It was a big night for Jesuit's sophomores. Other than Hutchinson and Burton, Lonnie Burt and Julius Christensen each ran for two touchdowns. Christensen finished with 109 yards on nine carries in the second half, including touchdown runs of 36 and 47 yards.

Jesuit's defense also continued its stellar play, holding down a Liberty team that was averaging 43.4 points per game. The Falcons had their most success early – driving deep into Jesuit territory on two of their first three possessions – but the Crusaders turned them back.

Liberty senior quarterback Hiro Diamond, a dual threat who accounted for 2,968 yards and 43 touchdowns in the regular season, struggled to find running lanes and was under a heavy pass rush, getting sacked five times.

Diamond rushed for 138 yards and one touchdown on 28 carries, but was held to 34 yards on 16 carries by Jesuit's first-string defense in the first half. He completed 8 of 17 passes for 62 yards with one interception, by senior Jake Viteznik.

Jesuit has won nine in a row since opening the season with a 17-3 loss to West Linn. Friday's win makes Jesuit 13-0 in opening playoff games since 2008.

"Hopefully it'll keep going," Jace Burton said. "Hopefully we can come together as a team and win a state championship."