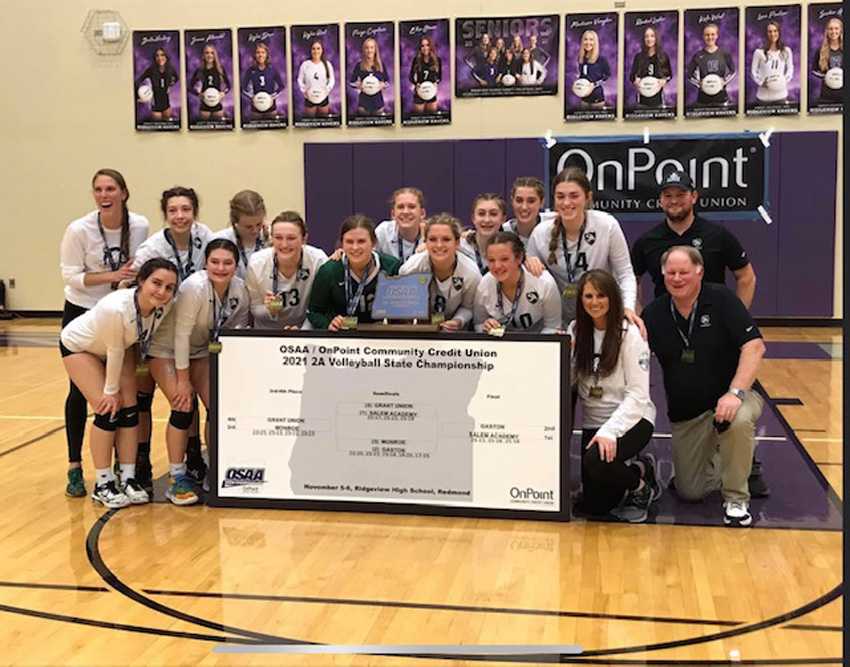 Salem Academy posed with the bracket, awarded to the championship-winning team, for the first time in 26 years

The bleachers were packed with the Crusader student body, coaches from other sports, faculty and administration, all of whom made the 130-mile trek to Redmond for a chance to witness history.

“We are a family,” said Melissa Holman, who’s been coach at the Salem school for six years. “This win meant everything to our school. It’s been 26 years since the Salem Academy Volleyball program brought home a state title. This is one we will never forget.”

Three long runs, one in each set, helped Salem Academy, which swept Grant Union in a Friday semifinal, win in dominant fashion over a Gaston squad that eked out a 17-15 Game 5 win over Monroe in the other semifinal. The first, in Game 1, was Salem Academy’s response to successive Gaston kills from Ally Lazott and Grace Smith, which made it 7-6 Greyhounds.  The 15-3 run, which helped the Crusaders build a 21-10 lead, including six kills from Aubrey Smith, who was named Salem Academy Player of the Match.

Game 2 was close until the late stages. A kill from Rhys Niederberger put Gaston up 16-15. Salem Academy countered with a 10-2 run to close out the set, gaining its first four points during the rally on Gaston errors before earning its final two on kills from Lexi Herber assisted by Bailey Pedersen.

Gaston star Mackenzie Berger, a 6-3 senior middle committed to Idaho State; started off Game 3 with two of her 14 kills, but the Greyhounds’ lead was short lived. Aly Berger’s kill got Salem Academy on the board and sent Aubrey Smith behind the service line, where she served seven straight, including two aces, as part of an 8-0 run. The Crusader lead grew to as many as 11, at 15-4, as Gaston errors – the Greyhounds had as many errors, 26, as kills – started to mount, perhaps owing to fatigue after that tough semifinal. Gaston got only as close as six the rest of the way and lost when Salem Academy setter Pedersen finished off an Aly Herber set with the kill that cemented the everlasting memory for Crusader faithful.

Salem Academy is comprised of multi-sport athletes, few of whom play club ball.

“In a small school we learn to share athletes,” Holman said. “Their training comes directly from us. I’ve been betting on these girls since Day 1.”

Gaston (22-2),playing in its first state championship final, got 14 kills, 12 digs and two blocks from Berger and 22 assists and 18 digs from Lexi Fern.

“Salem Academy had too many offensive threats,” said Greyhound coach Melody McMaster. “I was proud of our girls making it so far.”