Football: Canby warming up to playoff spotlight, once again
Tweet
The second week of the playoffs features Canby playing host to two-time reigning 5A champion Thurston in a quarterfinal
November 10, 2021 by Jerry Ulmer, OSAAtoday 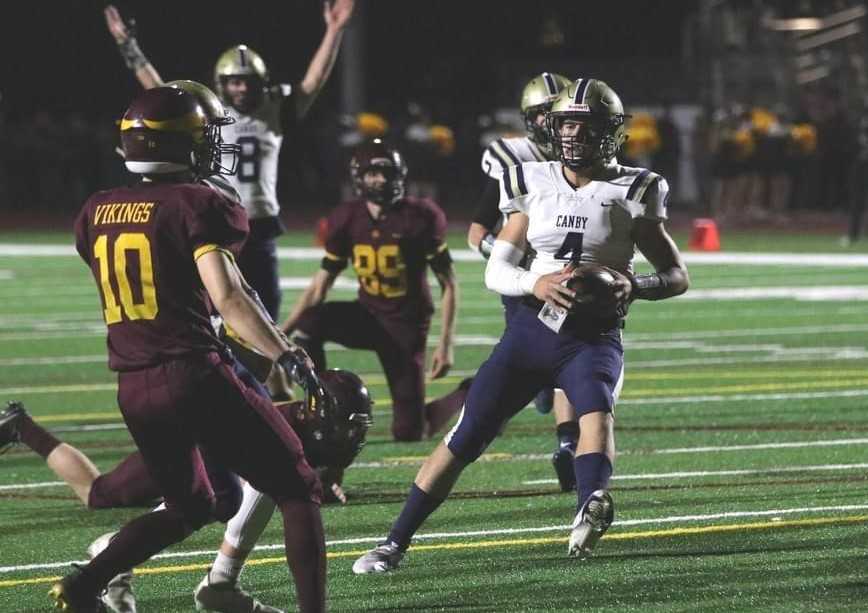 There was a time, not long ago, when playoff football was a way of life in Canby.

The Cougars appeared in the big-school playoffs 27 times in a 33-season span that ended in 2014, winning 40 playoff games and playing in seven state semifinals.

After that, though, Friday nights in November went dark in Canby. The Cougars struggled to compete in the rugged Three Rivers League, failing to qualify for the 6A postseason for five consecutive years. At one point, they lost 22 in a row.

But the lights were back on at Canby last week as the Cougars – who moved to 5A in the spring – defeated Lebanon 37-7 in a first-round game. And the excitement will amp up to another level Friday when No. 4-seeded Canby (8-2) plays host to a quarterfinal against No. 5 Thurston (8-0), the two-time reigning 5A champion.

“This is what we talked about from the moment we made the decision to go 5A,” third-year Canby coach Jimmy Joyce said. “We were given the opportunity, and we felt like it would benefit our school and our program. This is the kind of things we were looking forward to, playing into November against great teams like Thurston.”

With a win, Canby would make the semifinals for the first time since 2013. It's new territory for a fresh crop of Cougars, who needed to adjust to the playoff intensity in the first round.

“None of these kids have ever played in a playoff game before,” Joyce said. “We told them that November is different than October. Everything is amplified more. And I thought they handled it really well.”

Canby has a massive task Friday, however, in facing Thurston, which hasn't lost to a 5A team since 2018. In the final OSAAtoday 5A coaches poll, the Colts were third and the Cougars fifth.

“They've been the standard-bearer in 5A for three years, maybe longer,” Joyce said. “They have tremendous athletes.”

Canby has 5A's leading rusher in sophomore Tyler Konold, who has run for 1,515 yards and 18 touchdowns. The Cougars also have a dangerous dual-threat quarterback in senior Mikey Gibson, who passed for 132 yards and one touchdown and ran for 69 yards and one score in the first round.

Thurston's backfield features speedy senior Gavin Knights and 6-foot, 205-pound senior Brycen Indell, who ran for 172 yards in a 31-2 first-round win over Ridgeview. The Colts split time at quarterback between senior Alex Boring and junior Darien Witham, who have combined for 18 touchdown passes.

The game will include two of the state's premier tight ends in Thurston senior Jacob Newell (6-5, 230) and Canby senior Jacob Strand (6-6, 260), who have committed to Arizona State and Oregon State, respectively.

“We're going to ask Jacob Strand to take on a really important role this week, blocking probably some of the best talent he's going to see until he gets to Oregon State,” Joyce said. “It's going to be a great opportunity for the likes of Tyler Konold, who have aspirations to play high-level college football, to match up against some kids who are going to play high-level college football.

“If you love football, it's going to be a good game.”

Canby lost to No. 3-seeded West Albany 17-14 in Week 2 and No. 1 Wilsonville 38-12 in the regular season finale. Joyce said the loss to the Wildcats in the Northwest Oregon Conference title game was a learning experience for the Cougars.

“It just came down to a lesson in what playoff football is all about,” Joyce said. “Wilsonville is used to going deep in the playoffs. They're used to that big game, and frankly, we haven't been in a big game since I've been here.

“I think the kids now have a belief. When I got here three years ago, our goal was just to win a game. Now winning is no longer a goal, it's an expectation.”

A glance at other top matchups in the second week of the playoffs:

No. 9 Jesuit (9-1) at No. 8 Clackamas (10-1), 7 p.m.: The Crusaders, who have won nine in a row since opening with a loss to West Linn, get a big test against a Clackamas team that has lost only to undefeated Central Catholic. Jesuit sophomore Jacob Hutchinson has thrown 13 of his 14 touchdown passes in the last five games.