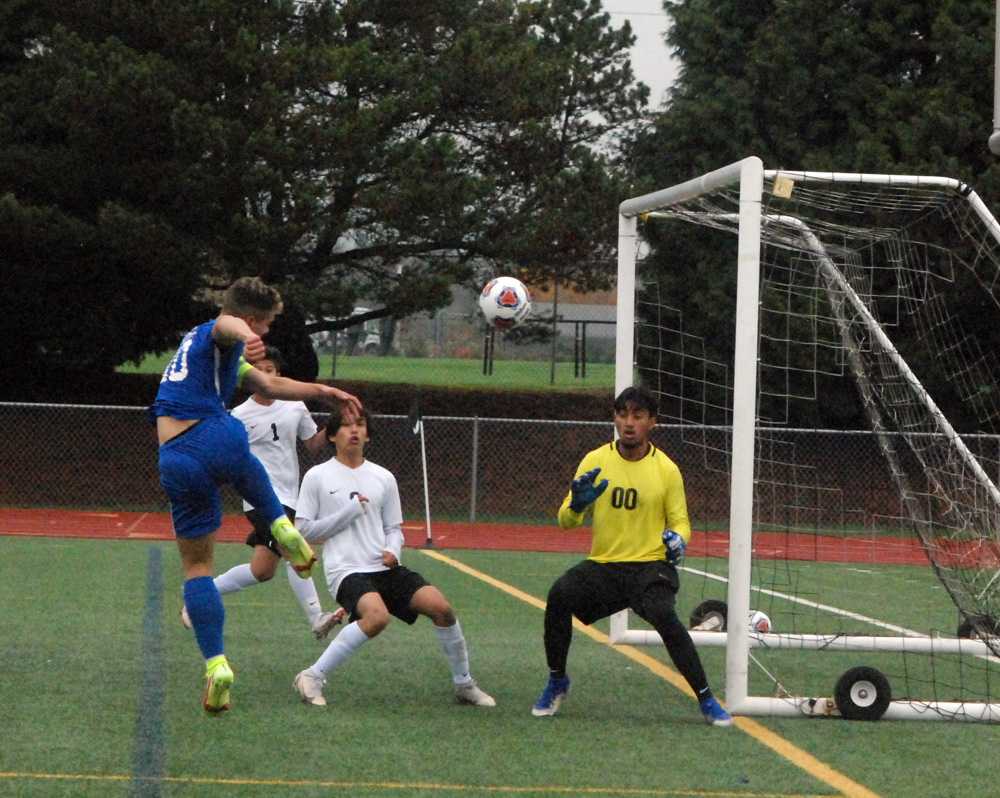 Felipe Rueda (10 in blue) was relentless in his assault on the Dayton goal. The senior had three goals and three assists

The final score reflected the dominant performance from the Eagles both on offense and defense. Catlin Gabel won its 14th boys’ state title al-time by demonstrating quick strike ability in the attacking zone and relentless intensity in front of the keeper. The Eagles seemingly threatened to score every time they were past midfield and made certain that Dayton couldn’t come close to finding the back of the net until the outcome was long since determined.

It was a virtuoso performance by a Catlin Gabel team that finished 17-0, outscored its opponents 111-10 and won 75 percent of its matches by five or more goals.

“I think they’re the best team I’ve ever seen,” said Dayton head coach Jony Miramontes, whose team also lost to the Eagles in September by the same score. “They have some very complete players. They are very well coached. You can tell that they have players who make the difference in all positions.”

Catlin Gabel put the pressure on Dayton’s back line from the start and kept it all match long. The Eagles have speed, athleticism and skill, the combination of which is simply jaw dropping.

In the first minute, Elijah Widdows, one of two senior strikers committed to playing college soccer, sent a dangerous cross into the box that just eluded the head of Adrian Long. Three minutes later, he collaborated with superstar attacker Felipe Rueda for the Eagles’ first goal. Widdows sent a perfect through-ball right onto Rueda’s foot about 15 yards in front of Dayton goalkeeper Marcos Ceja. Ceja stopped Rueda’s blast but could not control the rebound. Rueda used his speed to get to the ball first and slammed it into the back of the net.

“My word all week for them was ‘feet,’” said Catlin Gabel head coach Peter Shulman, whose team plays home games on a wide, grass field, not the narrow turf field at Liberty. “Play feet, play feet play feet. You have got to bring the ball down and play at the feet because it’s hard to catch up to the ball.”

After the initial burst, Catlin Gabel struggled to connect again for 15 minutes, which is unusual for a team that averaged more than six goals per match. Dayton’s Johnny Islas showed grit on defense while Danny Anguiano, Benji Hudson, Nando Magana and Oswaldo Rosas worked hard to make things challenging for Catlin Gabel’s back line.

“It’s always an adjustment coming here,” Shulman noted. “It took us a while to get into our rhythm, but once we did we were very hard to stop.”

The all-important second goal came for Catlin Gabel in the 20th minute. Rueda’s corner kick was expertly struck and found tall defender Evan Williams unmarked at the far post. The senior headed the ball into the open net with authority.

The third goal came four minutes later on another outstanding Rueda run. The Bowdoin College-bound senior sent a perfect cross with a right foot to the far post. The ball was run on by Widdows, who delivered a no-doubt one-timer with his left foot to the back of the net.

Aidan Sheeran-Hahnel had two chances to tack on one more goal before the half, but two skimmers just eluded the net.

The offensive onslaught continued for Catlin Gabel after the break. In the 43rd minute, Widdows was fouled in the box as he was shooting just wide. Rueda converted the penalty kick with a monstrous blast to Ceja’s right. Four minutes later, senior stopper Joshua Hamlett, who was tremendous all game long – showing off his signature superiority in the air time and again – was credited with a goal when his deep ball found the net, with help from miscommunication between Ceja and his defense.

Rueda scored again, his third, in the 52nd minute off of a perfect cross from Widdows, and Widdows tallied a minute after that, after settling a pass from Williams in the box and ramming it past Ceja for Catlin Gabel’s seventh goal.

The team’s exchanged goals late in the contest, with Hudson scoring on a rebound of his own shot for Dayton, and Widdows coming off the bench to complete his hat trick in the 74th minute off yet another Rueda assist.

As dominant as the 8-1 final score indicated, it might have been that much worse but for the heroics of Ceja, Dayton’s senior keeper. He made at least five stunning second half saves that showed the grit and guts of this senior-led Pirate team, which reached the championship for the first time in school history. When the match ended, he collapsed into tears in front of the goal mouth, unhappy that he hadn’t been able to do more.

“It was just emotions,” Miramontes said. “You always want to give it your best and try to win. Yes the guys made history by getting here, but there’s always that itch you want to win.”

Dayton, the seventh seed, played more than credibly. The Pirates, who had to defeat second-seeded Riverdale and third-seeded Riverside to get to Liberty, played with effort and distinction all match long.

“It was definitely a ride,” Miramontes said. “We worked so hard, early mornings and long days, to get to this point. This senior class, although the result didn’t come our way, they showed they were ready to play. I’m super happy for the opportunity to be here.”

Rueda and Widdows finished the match with six goals and five assists combined for Catlin Gabel.

“Most teams don’t have one striker as good as the two that we have,” Shulman commented. “It’s super hard to handle. The rest of the team plays very unselfishly. They move the ball quickly. It’s frustrating to play against us because you don’t have the ball very often.”

“We were so excited to come back to Liberty,” Widdows said. “We played as a team. Every single person here has passion for the game.”

Shulman, who won his fourth title as head coach, was asked afterwards whether this Catlin Gabel squad was his best ever.

“We’ve had some good ones,” he responded. “This team has a strong defensive core and a really strong attack. Our defense, they don’t just defend; they can all play the ball. It gets to our forwards in places where they can do something.”

Shulman pondered the question some more.

“We have a great soccer tradition,” he added. “There have been a lot of great players who have come through this program. This is definitely one of the best.”