6A boys soccer final: Summit reaches the top, finally
Tweet
The top-seeded Storm, the runner-up in 2018 and 2019, complete a dominant season by unloading on sixth-seeded West Linn 6-0
November 13, 2021 by Jerry Ulmer, OSAAtoday 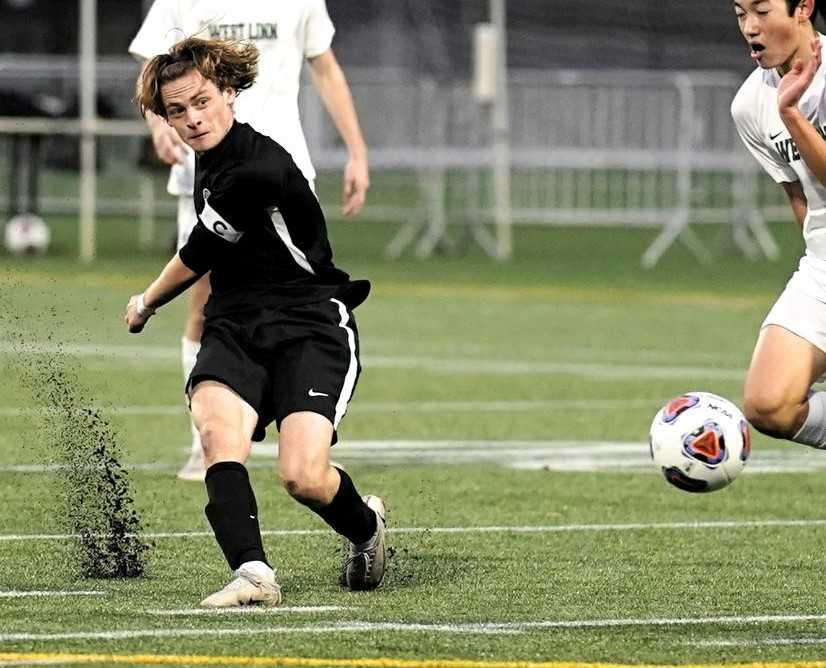 Summit's Nani Deperro had two goals in the 6A final against West Linn, giving him 32 for the year. (Photo by Jon Olson)

HILLSBORO – The Summit Storm had come too far, and come too close, to let a golden opportunity slip away Saturday night in the OSAA/OnPoint Community Credit Union 6A boys soccer final at Hillsboro Stadium.

Top-seeded Summit, which suffered heartbreaking losses in the 2018 and 2019 state finals, left little to chance with a tour-de-force performance in a 6-0 win over No. 6 West Linn. The winning margin tied for the largest ever in the big-school final and provided the exclamation point for a 17-0-1 season.

“It means so much, especially after losing twice, and not having a season junior year due to COVID,” said senior forward Nani Deperro, who scored twice. “It's the best feeling in the world. Senior year, last season, last high school game, we had to win. And we did that.”

From Summit's opening game, a 4-2 win at traditional state power Jesuit, the Storm were a cut above the competition. Summit outscored its opponents 95-11, the only blemish on its record a 2-2 tie at South Salem.

“After our first game, I was like, 'Whoa, we're going to be really good,'” senior Paul Fecteau said. “But we got through playoffs, we just didn't stop getting better. It feels like every team we played, we were just getting better.”

Said senior Alex Grignon: “I knew we'd have a shot at a state title, but I didn't think we'd be this dominant. It's such an incredible season. This is such an incredible night. I'm so happy for this group. We're going to enjoy it. What a great way to go out.”

It is the second state title for Summit, the other a 5A championship in 2013. And it could be the Storm's last season in 6A before joining other central Oregon schools in a 5A league starting in 2022-23.

“What do I say, retire in your prime,” Fecteau said. “This is by far the best team Summit has ever had, and the best team they will have for a long time.”

Summit lost to Jesuit on penalty kicks in the 2018 final and fell to Franklin in overtime in the 2019 final.

“The first two times we went here, I was just sitting on the bench, and didn't get any playing time in the finals, and I was still left in tears,” Fecteau said. “That just shows the connectiveness of our team. This means the world to us. It's unbelievable.”

Fecteau got the Storm started against the Lions (15-2-2), collecting a deflected ball, dribbling through the box and driving a shot inside the right post in the fourth minute. Deperro made it 2-0 in the 10th minute by finding the net from about 20 yards out, sneaking the ball inside the left post.

Junior Aiden MacLellan converted off a free kick by senior Rory McKee in the 26th minute for a 3-0 lead. It stayed that way until the 54th minute, when Grignon struck from about 18 yards out on the left side to make it 4-0.

Deperro earned a penalty kick after being taken down in the box in the 65th minute, but instead of taking the shot, he gave it to freshman Kaden Roskowski, who converted for a 5-0 lead.

Deperro got his second goal of the match – and team-leading 32nd of the season – on a breakaway five minutes later, but found greater satisfaction in deferring the penalty kick to Roskowski.

“KP is like my second little brother,” Deperro said. “He's a great kid. I would hope that a senior would do that for me as a freshman. I thought that he would really appreciate it. It made my day. He was so happy. It was totally worth seeing his reaction, to get that goal in the final.”

Roskowski had missed a penalty kick early in the season.

“His confidence was a little lower, so it was phenomenal for Nani to give it to him,” Fecteau said.

It was an example of the camaraderie that carried the Storm this season.

“Yes, we have some of the best players, but it is a family from top to bottom,” Summit coach Joe LoCascio said. “We saw it all year from our captains, all year from our seniors. They said, 'We're learning from our past years, and we're going to learn even more this year.' They just brought the group together. Team chemistry.”

Deperro, the Mountain Valley Conference player of the year, was the catalyst all year. He also had 19 assists.

“He's unbelievable. He does something new every game,” Fecteau said. “I can't really keep up with him.”

Grignon said of Deperro: “Give him the ball and he does magical things, and he sets you up. It's so great to play with him.”

And fun to coach him, according to LoCascio.

“I just smile,” LoCascio said. “Honestly, I get away from him, and I just have a big grin on my face. He shares it right back. He's just such a special player. Tons of fun to watch.”

Summit's victory margin matched the largest in the history of the big-school final, right next Lakeridge in 1982 and Jesuit in 1986 and 1987, all 6-0 wins. West Linn entered the match as an underdog, but the Storm didn't take the Lions lightly.

“They were here to play, and we knew we had to play our game, take every opportunity we had to its fullest, and finish our chances,” Deperro said. “And I think we did exactly that.”

Despite the defeat, the season was a breakthrough for West Linn. The Lions reached the final for the first time ever, defeating No. 3 South Eugene in the quarterfinals and No. 2 Jesuit in the semifinals.

“Everyone doubted us from the get-go,” Lions senior Maxwell Kelley said. “I'm just proud of us because we came out and battled in games that we shouldn't have won, against teams that were ranked higher. First year in the finals for us, first trophy.”