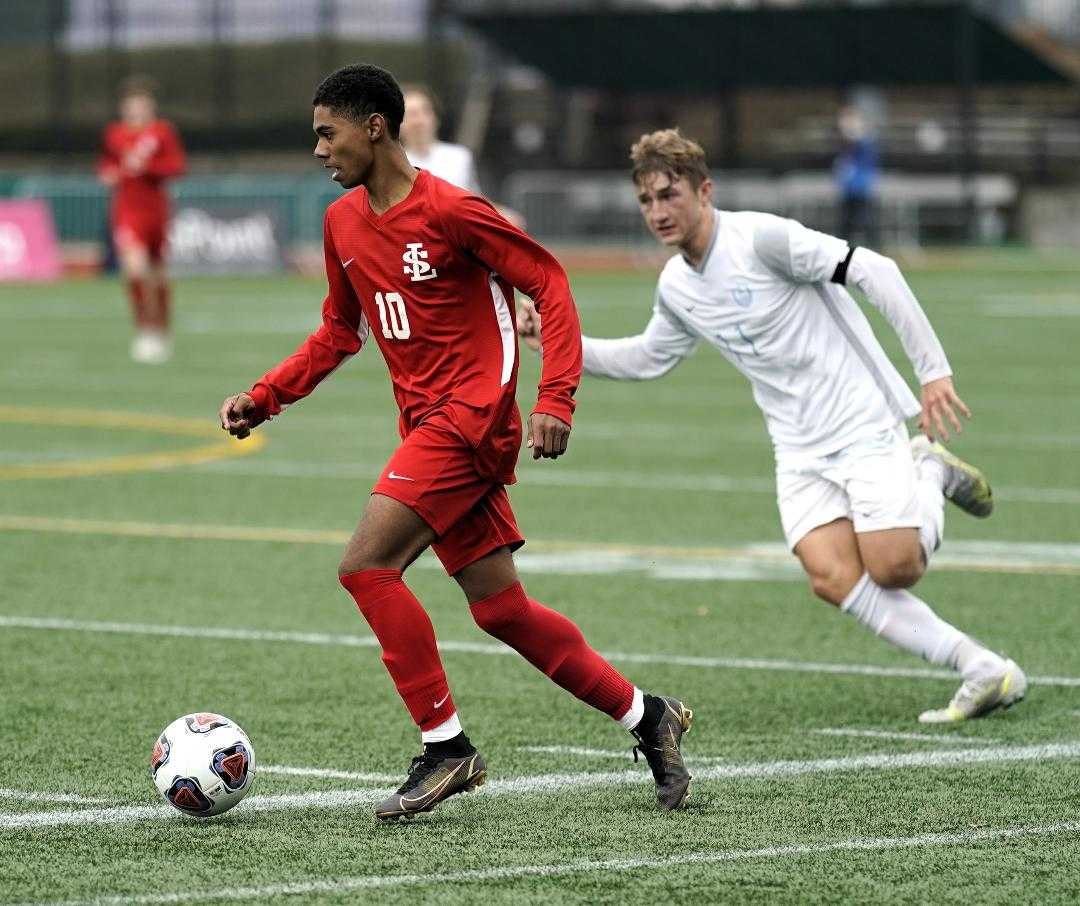 HILLSBORO -- When Monty Hawkins returned as La Salle Prep's boys soccer coach this year -- 26 years after his first stint ended with the Falcons -- he could see the Falcons had the makings of a state contender.

All season, La Salle Prep delivered on that potential. And Saturday, the top-seeded Falcons put the final touch on a state championship run with a thorough 5-0 win over No. 3 Corvallis in the OSAA/OnPoint Community Credit Union 5A final at Hillsboro Stadium.

"As long as we were committed to one another, and stayed humble, and kept working, this day was inevitable," Hawkins said. "And that's what happened. This group had it in them, and they delivered."

Senior forward Mizael Harris converted three penalty kicks -- two on fouls he drew -- to stake the Falcons (16-1-1) to a 3-0 lead by early in the second half, and sophomore Kevin Serrano-Maldonado added two second-half as La Salle Prep repeated as the 5A champion.

It is La Salle Prep's seventh state championship and the second under Hawkins. He coached the Falcons for six seasons (1990-95), leading them to a co-title in 1994, before leaving to coach the Portland State women's team. He returned this year after coaching the boys at 6A Sherwood for 14 seasons.

"He was just like, the man," Serrano-Maldonado said of Hawkins. "He was like a father to us. He guided us through the whole season and really set the tone for us."

Said Hawkins: "It was just incredible. They accepted me, and we just kept the tradition going. Today was heaven in seven. It was impressive."

It helped that the Falcons had the multitalented Harris, who accounted for both of their goals in a 2-1 win over Wilsonville in the 2019 final. With three goals and an assist Saturday, Harris finished the season with 24 goals and 21 assists.

Harris drew fouls in the box in the 13th and 30th minutes and drove home penalty kicks past Corvallis sophomore goalkeeper Oscar Hommel.

"Mizael is a magician with the ball, his change of pace, and he steps up. The bigger the platform, the bigger the performance for him."

Corvallis coach Chad Foley, who led the Spartans to a 1-0 overtime win over La Salle Prep in the 2018 final, said the penalties were "definitely unfortunate."

"We knew coming in that we had to do a good job of keeping them in front, because Harris is very technical," Foley said. "We knew that. He got the better of us in a couple of different occasions.

"You get a couple of bad breaks, and you have to recover quickly, and we weren't able to do that."

Harris drilled the third penalty kick in the 42nd minute after freshman Vance Sheffield drew a foul on a collision with a defender while going after a ball in the air.

Serrano-Maldonado made it 4-0 in the 51st minute by knocking home a rebound off a shot by Sheffield, and added the fifth goal in the 56th minute off a corner kick by Harris.

The title was the perfect send-off for Harris, who will go down as one of the best ever to play at La Salle Prep.

"It was really satisfying," Harris said. "It was definitely meaningful. I think that last year, it was all jumbled up, all crazy, and this year it feels good to win. I this is the best way to go out."

Serrano-Maldonado credited Harris for helping him grow as a player.

"He's probably one of the best I've ever played with, if not the best," Serrano-Maldonado said. "He's a great role model for me. He's a great influence. Every day I try to be a better player than him, or be as good as him, because he pushes me."

Corvallis (12-4-2), going for its fourth title, was hoping for a much different outcome than when it lost at La Salle Prep 4-1 on Sept. 19. But the Spartans could not get out from under the Falcons' attack to apply their own pressure.

"All the credit in the world to La Salle," Foley said. "They came out with a great game plan and executed. This is a great experience for us, and it's going to propel us forward into next year."