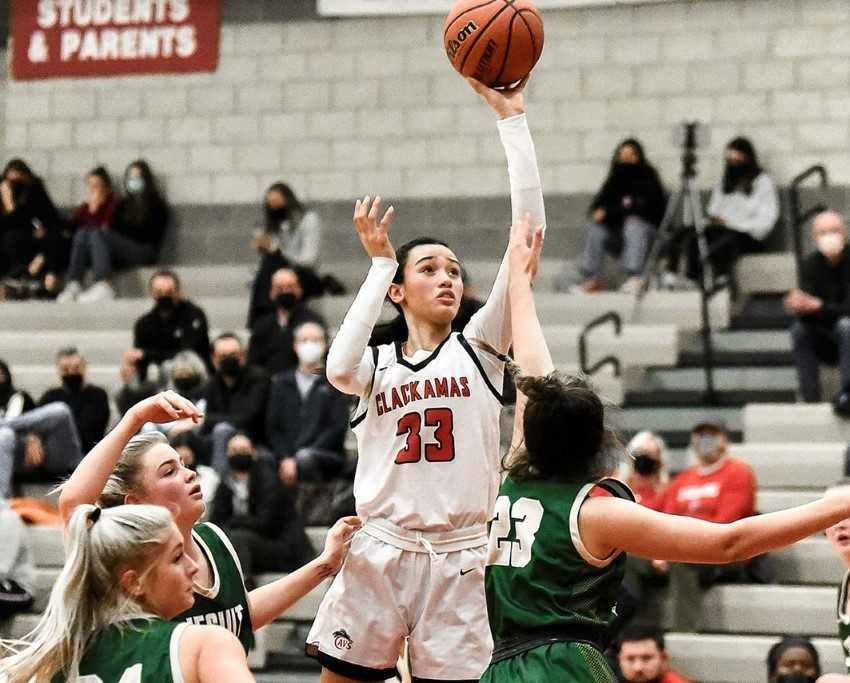 CLACKAMAS – It's starting to look like the future is now for Clackamas girls basketball.

The third-ranked Cavaliers, who start four freshmen, continued their early-season tear Friday night with an eye-opening 55-32 home win over No. 2 Jesuit in a 6A nonleague game.

If anyone had doubts about Clackamas as a 6A title contender with seven freshmen on its roster, the Cavaliers answered them emphatically Friday night. Considering they also hold an overtime win over No. 4 South Medford, it's clear that they are a force to be reckoned with.

“Right now it's four years in a row. That's our goal,” said the 6-foot-1 Davidson, who is averaging 19.8 points per game. “We're working really hard every day in practice to accomplish that.”

Many of the freshmen have been playing together since the fourth grade and waiting for their chance in high school.

“We used to talk about it a lot, and now that it's here, it's super fun,” Peterson said. “Everyone is talking about how we just want to get to state, and obviously win that. But it'll take everyone to stay together, like we have been doing.”

Davidson and Peterson scored baskets and freshman guard Sara Barhoum hit a three-pointer for a 7-0 lead. The Cavaliers led 13-2 and 20-4 before taking a 27-8 advantage into halftime.

Jesuit, which entered averaging 58.0 points per game, struggled to make shots against the aggressive Cavaliers. The Crusaders started 1 for 15 and finished the first half 4 for 31, missing all 13 attempts from three-point range.

After a slow start in a 64-26 win over Liberty on Tuesday, Clackamas coach Korey Landolt liked how her team met the challenge Friday.

“It's nice to be able to get up for a team like Jesuit,” Landolt said. “We needed that start for our journey. A good start, giving that energy, we knew things were going to start to fall in line if we could execute those things.”

Davidson said “it was really important for us to start with a lot of energy because we knew whoever hit first was going to be in the lead the rest of the game.”

Jesuit cranked up its intensity to start the second half and closed within 30-14, but the Cavaliers answered with an 8-0 run on baskets by Davidson, Barhoum, freshman Reyce Mogel and junior center Eliza Buerk.

“We were working on staying together because Jesuit is obviously a really good team,” Peterson said. “So our focus was just to play as a team and move the ball, and I think we did a really good job with that. I think everyone was pretty calm. We all just knew we had each other's backs.”

The win only bolsters the team's surging confidence.

“It means a lot,” Davidson said. “It was a big game, and we knew it coming in. It means a lot to us to win that game because it kind of sets the tone for the rest of the season.”

Barhoum had nine points and freshman Dylan Mogel added six points and nine rebounds for Clackamas, which shot 44.4 percent (24 for 54), including 6 of 24 from behind the arc.

“We knew we had to slow her down and pay a lot of attention to her,” Landolt said of Sixta. “It was good for the kids, especially the freshmen, to have an assignment like that, and be able to go out there and really execute it.”

“They brought a lot of energy at the start of the game, and we didn't match, and that's not usual for us,” Crusaders coach Jason Lowery said. “That's the first time this group has been the hunted, and they saw what that felt like.

“Clackamas brought fire. Give them credit. … They played really well. I hadn't seen them play that well this year.”

Lowery was impressed with Davidson.

“I wish she wasn't a freshman,” he said. “I don't want to see her the next three years. But all of their freshmen are good. She's special, but they have a lot of good freshmen.”

Davidson, who already has an offer from Stanford, is just getting warmed up to the high school game.

“I've been performing OK. I know I can perform better,” she said. “I always have higher goals for myself. I need to work on my rebounding, and knowing when to take it, knowing when to pass. But overall, I think I've been playing pretty well.”

Davidson won't be able to keep a low profile, and neither will the Cavaliers, who blew their cover with the surprising win over South Medford.