Boys basketball: Football run 'carries over' for No. 1 Tualatin
Tweet
Propelled by a nucleus of players from the 6A runner-up football team, the Timberwolves have won their first six games
December 23, 2021 by Jerry Ulmer, OSAAtoday 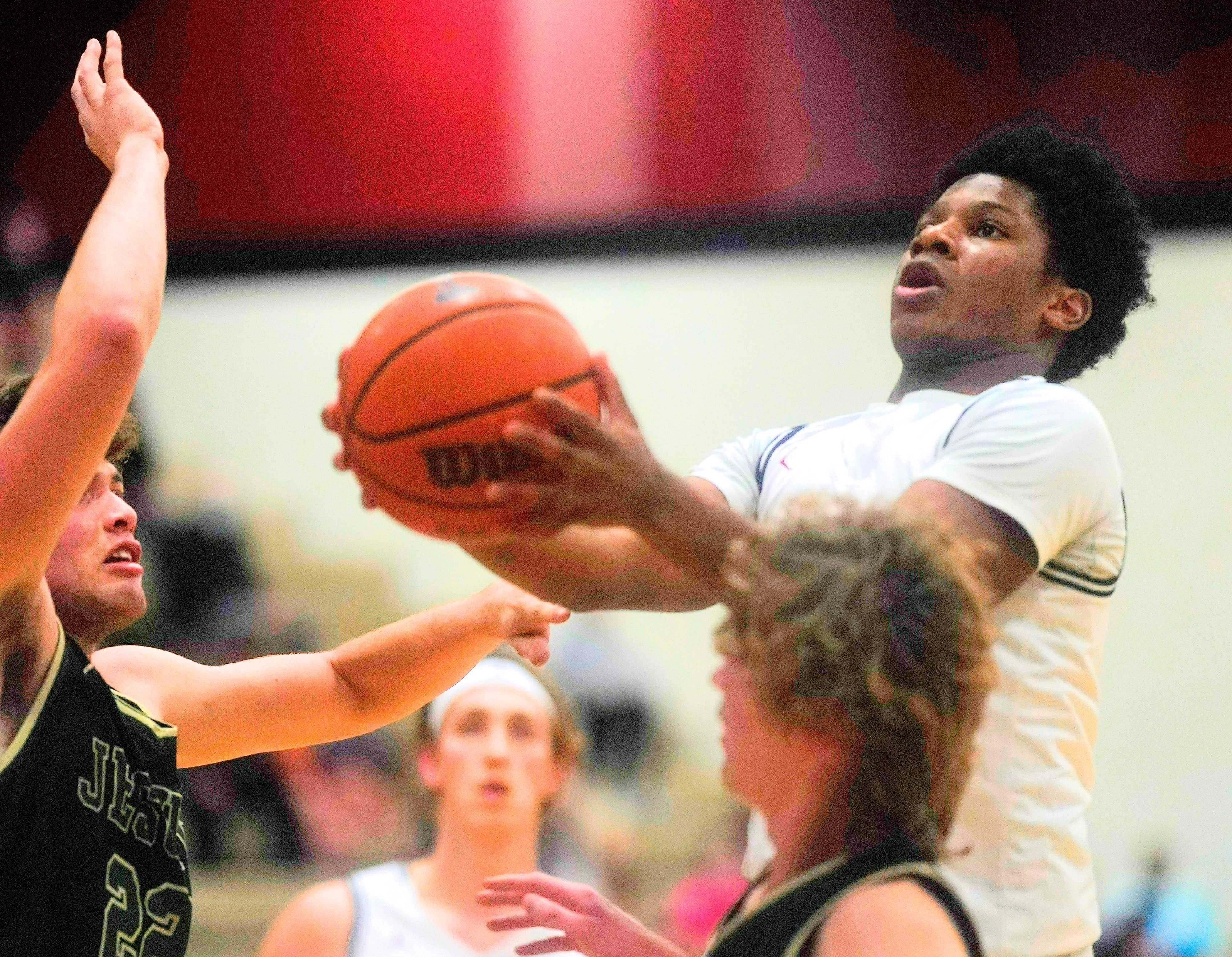 As the 6A football playoffs unfolded, and Tualatin kept winning, Timberwolves boys basketball coach Todd Jukkala figured it would mean a slow start on the court this season.

After all, six football players were expected to see significant playing time for the basketball team, including four returning starters from last season, and they likely would need time to reboot physically and emotionally.

“I was a little concerned about it, how this is going to translate,” Jukkala said.

The way it has turned out, though, the Timberwolves have made the transition with ease. They have won their first six games and risen to No. 1 in the OSAAtoday 6A coaches poll, putting to rest any notions of a football hangover.

“One thing I've learned about this group is they're very resilient, and they love challenges,” Jukkala said. “They feed off competition, and this is the next thing they look at as competition. I think it carries over. Sure, they were disappointed in football, but they bounced back pretty well.”

The four returning starters – senior guards Malik Ross and Noah Ogoli and senior posts Peter Burke and Kellen Hale – were key contributors in football, as were junior wing Jack Wagner and sophomore guard AJ Noland. They have brought their intensity into basketball season.

“It was so fun to watch those guys play football,” Jukkala said. “I hoped it would – and I think it has – motivated them into this next season. That football mentality brings a toughness that really helps you out in other sports.”

Ross, Ogoli and Burke earned starting spots as sophomores on a team that finished 13-12 and lost in the first round of the playoffs. Tualatin went 11-5 last season.

The Timberwolves have played only one team currently ranked in the 6A top 10, defeating co-No. 8 Jesuit 59-54 in a home game Dec. 14. They defeated Benson 76-39 and Barlow 51-46 to win the Barlow Trail Tournament last weekend.

The 6-foot Ross, the star tailback in football, and the 6-1 Ogoli, a receiver, form a highly productive backcourt. Ogoli leads the team in scoring at 19.6 points per game and Ross averages 14.8 points and 5.6 rebounds. Both can lock down on defense.

“They're kind of stat-fillers,” Jukkala said. “They get assists, steals, rebounds. You've got two of those guys on the floor. It's a nice luxury as a coach to have players like that.”

The same explosiveness that made Ross a dynamic weapon in football also makes him difficult to defend in basketball.

“He's sneaky with his speed and his quickness,” Jukkala said of Ross, who led the team in scoring last season (15.5 points). “Watching him play football, he was patient about picking his spots, and then he'd see an opening, and then boom, he'd get there. He has that burst. You can really see that out on the floor.”

Ogoli and junior guard Josiah Lake (10.0 points, 4.4 rebounds) are the team's best deep shooters. The 6-5 Burke, who has a knack for passing out of the post, anchors the inside on both sides of the ball.

“He's kind of like a glue guy,” Jukkala said of Burke. “He can score, but it's not always what we need him to do.”

Lake and 6-7 senior Ashton Rose have started several games, but Jukkala has many options in his rotation.

“We've got one of the deepest benches we've ever had,” Jukkala said. “We've just got guys that can play. We have a good mix of experience as well as younger guys. We've got darn near 10 guys.”

“Until somebody beats them, they're the ones,” Jukkala said of the Lions. “But our league is so tough. The coaches in our league are top-notch. Every night it's going to be tough.”

Tualatin will end an eight-day layoff Sunday when it meets No. 3 Grant (4-1) in the first round of the Les Schwab Invitational at Liberty High School. The Timberwolves will be looking for payback from last season, when they lost to the Generals 63-54 in the Red Bracket semifinals of the Portland-area Culminating Week Tournament.