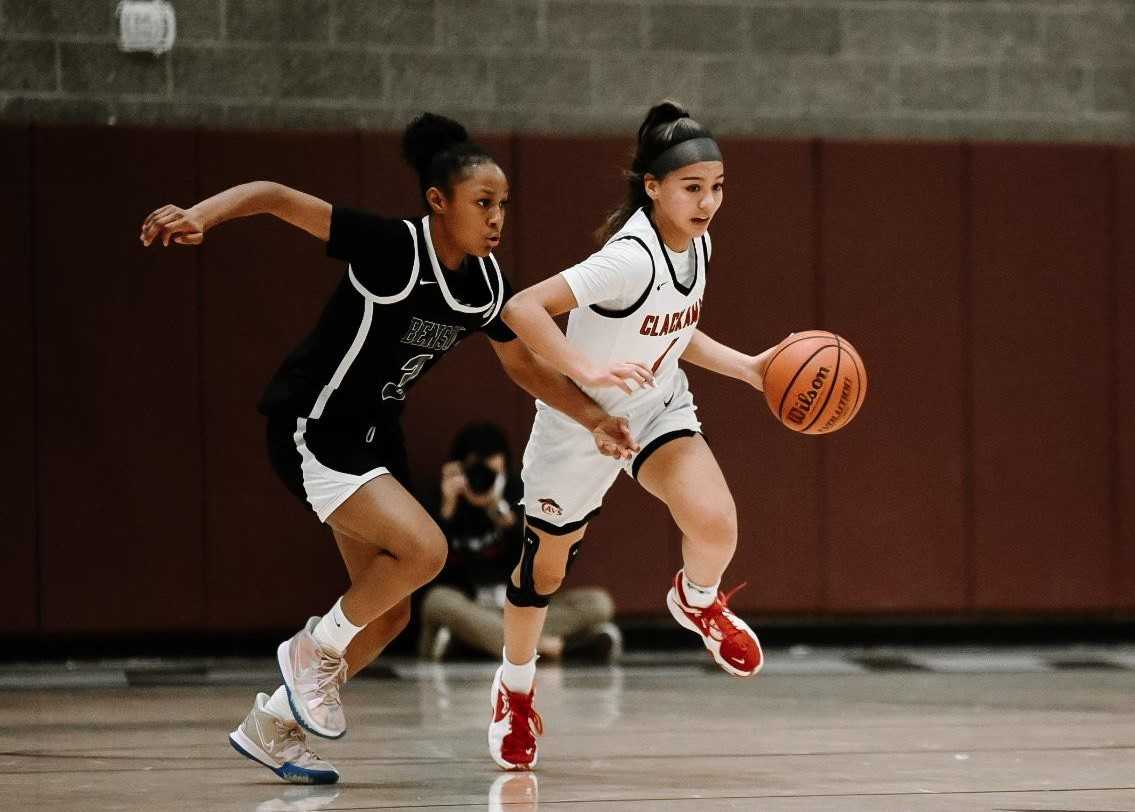 PORTLAND – With the No. 1 ranking in 6A girls basketball – and four freshman starters – Clackamas is sure to face a variety of challenges this season.

Wednesday night, the Cavaliers passed another big test, overcoming the physicality and quickness of co-No. 5 Benson to win 52-44 in the POA Holiday Classic at Franklin High School.

The swarming Techsters (3-2) forced Clackamas (9-0) into an uncharacteristic 18 turnovers, but ultimately, the Cavaliers showed that they had enough skill, savvy and composure to hold up under the heat.

“Benson is a one-of-a-kind team,” Clackamas coach Korey Landolt said. “We haven't seen anything like that this season. … We're happy to walk out with a win, for sure.”

The Cavaliers now hold three wins over top-five teams, also defeating No. 3 South Medford and No. 4 Jesuit. They will meet No. 2 Beaverton in the tournament finale Thursday night.

“I think we all know that this is what we should be doing,” Clackamas standout freshman wing Jazzy Davidson said of the impressive start. “This is what we were expecting to be doing.”

Said freshman point guard Avery Peterson: “It's what we should be doing, but it also builds us to know that we can beat some of the top teams.”

In Wednesday's game, the 6-foot-1 Davidson made 6 of 8 shots and finished with a team-high 16 points, nine rebounds, four assists and two steals. Peterson had 13 points and freshman Dylan Mogel added nine points, 10 rebounds and two blocks.

Clackamas scored the game's first seven points and never relinquished the lead. The Cavaliers extended a 25-23 halftime lead to 42-27 late in the third quarter, then held on as Benson got as close as six points in the fourth quarter.

“They're always a physical team, so we know what to expect coming into the game,” said Davidson, who has faced Benson's players in club ball. “Our goal was just to come out and play as hard as they were, if not harder. Both teams are super passionate, and we both want to win super bad, so it always gets intense in games we play them. But it's really fun.”

“It was really tough,” Peterson said. “They were doing a good job of getting up on me and making me have a tough time. But everyone came and helped me. My team set screens for me, and they all had my back.”

Clackamas, which shot 54.3 percent (19 of 35), prevailed despite making only 12 of 26 free throws and giving up 14 offensive rebounds, which led to 19 second-chance points. Under Benson's pressure, the Cavaliers could get off only eight three-point attempts, making two.

“We like to shoot three-pointers, and they just pushed us right out of our shooting range,” Landolt said. “We couldn't really get much into it.”

It was the type of defense that the Cavaliers may not see from any other team in Oregon.

“Our biggest strength is our defense,” Benson coach Eric Knox said. “Our footspeed can get up into them. Most teams can't create that kind of problem. I think that's going to come in handy down the road.

“I love my girls. They're young, but they're feisty, they fight, and their collective grit is amazing to see. And you're going to need that down the road.”

Landolt said that Benson's physical play “can get in your head.”

“I thought my girls did a good job of kind of flushing those little mistakes, because we weren't perfect, by any means,” Landolt said. “The girls just had to play through it, and they did. We can learn from all those possessions that were missed opportunities for us.”

Mahogany Chandler Roberts, a 6-2 sophomore, led Benson with 20 points, 11 rebounds, three blocks and four steals. Her size and strength created a challenge inside for Davidson and 6-3 junior Eliza Buerk.

“She's really good,” Davidson said of Chandler Roberts. “I love playing against her because it forces me to work on my defense and be crafty on offense, too.”

Benson started three sophomores in Chandler Roberts and guards Maurianna Hashemian-Orr and Olivia Hinck, alongside junior guards Malaya LaSeur and Onna Brown. The Techsters were missing one of their starters in 6-3 senior wing Tait Quinlan, a transfer from Southridge who is out for the next two weeks with a shoulder injury.

“She changes us as a group, because she's 6-3 and athletic,” Knox said.

Benson shot 29.8 percent (17 for 57), including 1 of 15 on three-pointers. LaSeur had eight points and Brown added six points before fouling out in 16 minutes.

Knox called the game a “clash of two titans, two teams that are going to be around for years to come.” To the Techsters, he said, Clackamas represents “the new Southridge,” the powerhouse that Benson finally toppled to win the 6A title in 2019.

Other games Wednesday at Franklin:

No. 7 Lakeridge 57, Jefferson 50: The Pacers turned a six-point deficit in the second quarter into a 14-point lead in the third quarter and held off the Democrats. Keelie O'Hollaren had 17 points, nine rebounds, two assists and four steals and Reese Ericson added 12 points, 11 assists, four rebounds and four steals for Lakeridge. Abrianna Lawrence made four three-pointers and scored 18 points for Jefferson.

Co-No. 8 Oregon City 40, West Salem 34: Emily Billings scored eight points, making both of her three-point attempts, and Madison Norton added seven points for the Pioneers, who opened a 26-14 lead at half. Elizabeth Bennett, a 6-0 junior post, had 24 points, 11 rebounds and two steals for the Titans.

Mountainside 60, St. Mary's Academy 51: Lindsey Wilson scored 30 points – making 11 of 15 from the field and 8 of 10 free throws.-- and had 13 rebounds as the Mavericks downed the Blues. Halle Hageman added nine points, six rebounds and six assists for Mountainside, which led 35-27 at half and pulled ahead by 17 points in the third quarter. Sofia Bell (15 points, 11 rebounds, five assists) and Abby Graham (15 points) paced St. Mary's Academy.

No. 4 Jesuit 44, co-No. 8 Wells 36: Down 12-11 at half, the Crusaders outscored the Guardians 19-10 in the third quarter to take control. Emma Sixta made four three-pointers and scored 20 points for Jesuit, which got eight points and 13 rebounds from Kendra Hicks. Charlotte Richman and Eliza Digiulio each had 10 points for Wells.

Co-No. 5 Barlow 53, No. 2 Beaverton 46: The Bruins rallied from a 13-point, second-quarter deficit to drop the Beavers, avenging a 39-28 road loss on Dec. 8. Kennedie Shuler had 16 points, nine rebounds and three steals and Annie Koenig added 13 points for Barlow, which led by 12 in the fourth quarter. Lainey Spear had 18 points, 12 rebounds and three steals and Zoe Borter had 14 points and seven rebounds for Beaverton.