Girls basketball: Clackamas flips script to beat Barlow 65-58
Tweet
No. 5 Cavaliers start fast and turn back the No. 3 Bruins to pull into a first-place tie in the 6A Mt. Hood Conference
February 2, 2022 by Jerry Ulmer, OSAAtoday 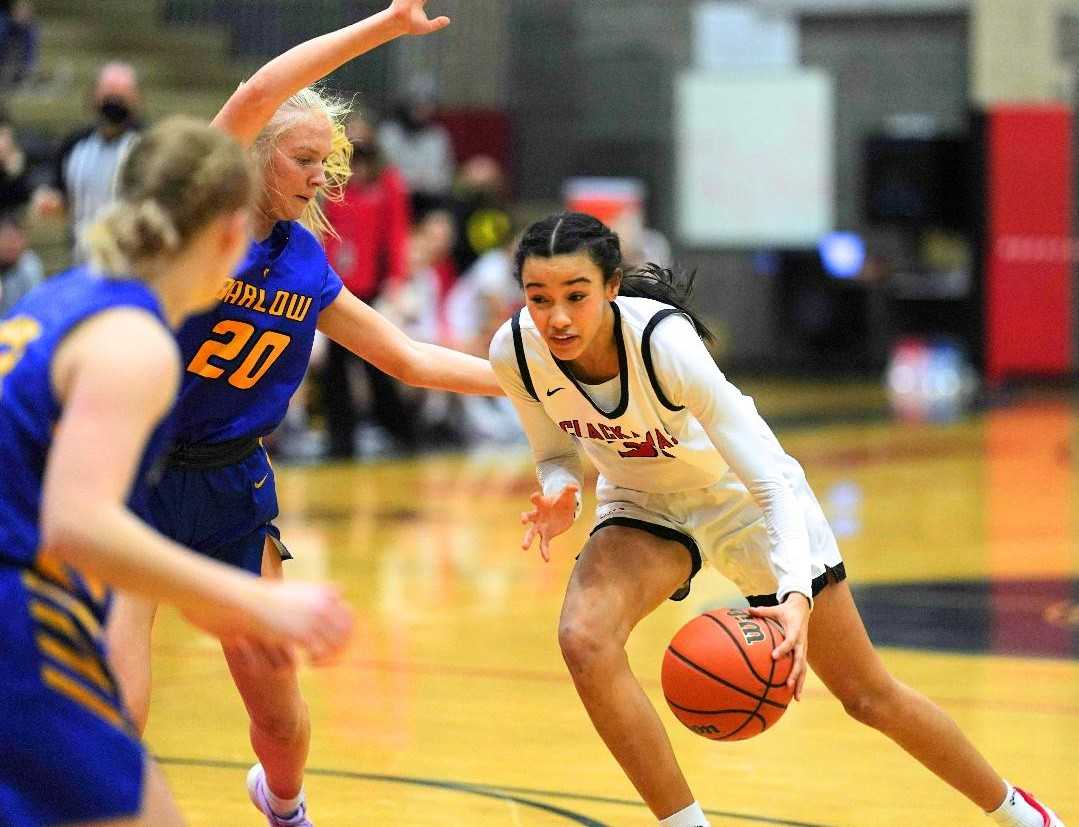 CLACKAMAS – One month after falling prey to a slow start in a loss at Barlow, Clackamas was determined not to suffer the same fate in the rematch at home Wednesday night.

So the No. 5 Cavaliers wasted little time in getting down to business, scoring the game's first 10 points and going on to a wire-to-wire, 65-58 win over the No. 3 Bruins in a 6A Mt. Hood Conference girls basketball showdown.

Barlow (15-3, 7-1) wouldn't go away, getting to within three points early in the fourth quarter, but Clackamas (17-2, 7-1) came through when it mattered to pull into a first-place tie with the Bruins.

“Last time, they came out and punched us first, so we knew we had to hit them first if we were going to keep the lead the rest of the game,” Clackamas freshman wing Jazzy Davidson said. “So it was real important for us to set the tone.”

Freshman guard Dylan Mogel made a three-pointer and scored on a drive as Clackamas led 10-0. When freshman guard Sara Barhoum connected from deep, it was 13-2.

“It was super important because it was like a head start,” Barhoum said. “They got that on us last time, and that's how they beat us. We just wanted to prove ourselves and just go out there and start with a lot of intensity. We had a couple of hard practices, so we were ready. It was personal.”

Clackamas made six of its first seven shots and forced the Bruins into six turnovers in the first quarter. The lead grew to 12 points in the second quarter.

“They definitely had a chip on their shoulder,” Barlow junior guard Annie Koenig said. “They knew what we were going to do, and they really wanted this one, you could tell. It felt like they came out gunning for us this time, kind of flipped from last game.”

The 6-foot-1 Davidson continued her sterling rookie season by scoring 28 points and Barhoum added 13 points for the Cavaliers, who have won eight in a row since the 50-44 loss at Barlow. Clackamas coach Korey Landolt said the performance reflects the growth of the young team, which starts four freshmen and one junior.

“Every time I would think, 'OK, we're about to panic here,' we actually answered, which was cool,” Landolt said. “That shows the maturity, that they're growing, and starting to depend on each other to work within each other's strengths. They're already a talented team, but you challenge them in different ways, and they respond.

Davidson said the Cavaliers have “matured a lot on the court and off the court” since losing to No. 1 Beaverton and Barlow in back-to-back games.

Davidson said she was more aggressive on offense Wednesday than in the loss to Barlow, when she had 21 points. In the rematch, she scored 13 points in the first half, which ended with Clackamas up 38-30. She finished 10 of 18 from the field.

“The last game, I wasn't looking to score from the get-go, and it hurt us,” Davidson said. “I knew I had to look to score. When I look to score, the defense draws in on me, so it opens it up other people.”

Barlow entered with a 12-game winning streak that included victories over Beaverton, No. 6 Benson and Clackamas. And aside from the slow start, the Bruins were able to trade punches with the Cavaliers, largely thanks to Koenig, who erupted for a season-high 31 points.

Koenig scored on jumpers and drives, keeping the defense guessing. She hit 9 of 16 shots, including three three-pointers, and all 10 of her free throws.

“She's added a lot of elements to her game,” Barlow coach Nick Hudson said. “She's always been a good outside shooter, but having her be that threat to put the ball on the floor has been huge.”

Count the Cavaliers among those impressed with Koenig, who at one point went high to take a rebound away from the long arms of Davidson, then pivoted and made a scoop shot around her.

“It didn't matter what we threw at her,” Landolt said. “We were trying to switch screens on her, so she didn't feel comfortable. She didn't get anything easy. Kudos to her, because she really took the initiative. She knew she had to step up for her team tonight, and she really kept them in there.”

Koenig's scoop shot got Barlow to within 53-50 with 7:01 left. But Davidson answered with a putback basket and Clackamas went on an 8-1 run to lead 61-51 with 4:40 remaining. The Bruins got no closer than five points after that.

“We couldn't get over the hump,” Hudson said. “When we got within three, I was like, 'All right, we're going to do it,' and they came out and got some buckets from Davidson. She's a really good player.”