Boys basketball: No. 3 West Linn finds energy to overcome LO
Tweet
Lions fall behind Lake Oswego by 14 points in the first half before cranking up the intensity in the second half to win 76-69
February 3, 2022 by Jerry Ulmer, OSAAtoday 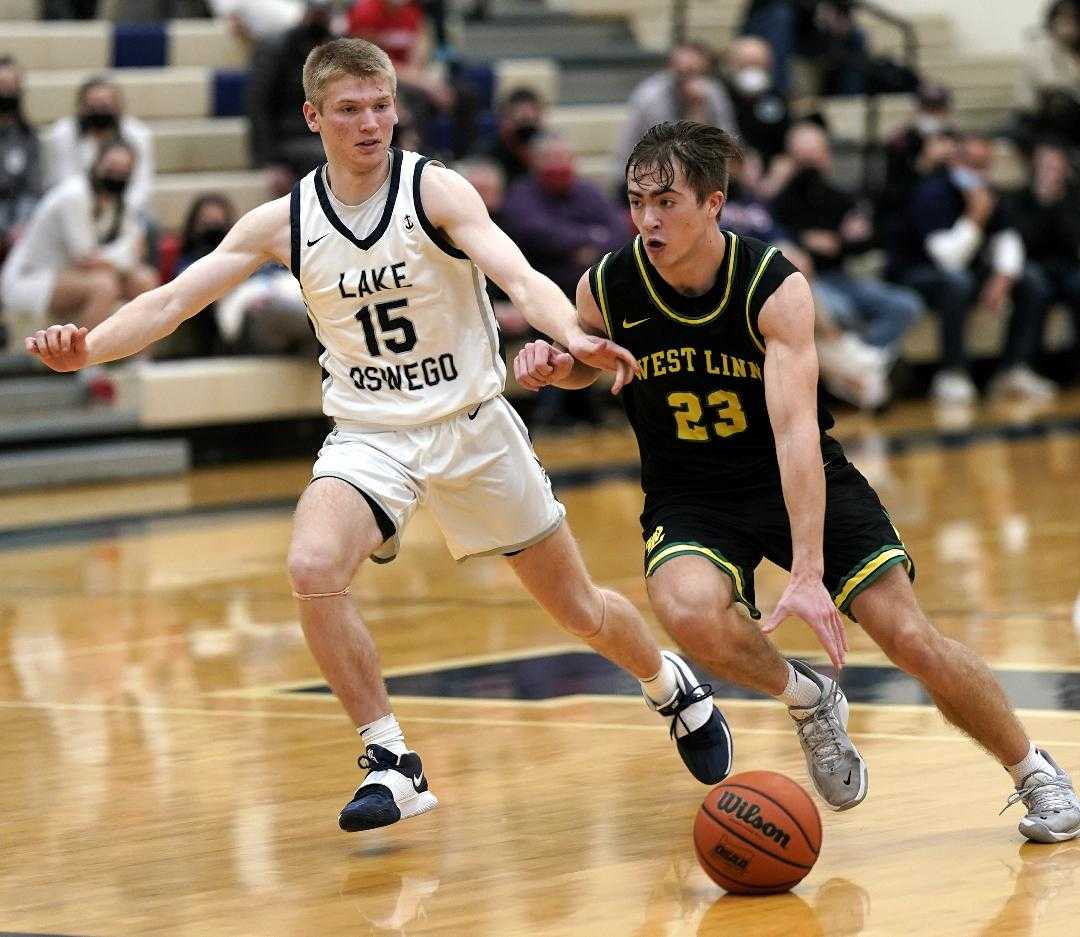 LAKE OSWEGO – It would've been easy for No. 3 West Linn to crumble Thursday night on the road at Three Rivers League rival Lake Oswego.

The Lions fell behind in by 14 points in the first half against the jacked-up Lakers, who were riding a six-game winning streak and coming off an upset win over No. 1 Tualatin. And they didn't appear to have an answer for 6-foot-6 freshman Winters Grady, who seemed to be toying with them in a 22-point first half.

“I never thought we were going to lose the whole game, even in the first half,” said Lions junior point guard Jackson Shelstad, who finished with 24 points, six rebounds and five assists. “I knew the second half, we were going to come out hungry.”

Senior guard Zeke Viuhkola not only scored a team-high 26 points for West Linn, but he helped put the clamps on Grady in the second half. After the big first half, the talented Grady didn't score again until the final two minutes of the game, finishing with 27 points.

“The whole game, we were just trying to make him pass to other guys,” Viuhkola said. “I think we did a good job of being physical with him in the second half and making him make tough shots over us.”

West Linn junior wing Mark Hamper, playing his first game in almost a month after recovering from mononucleosis, also was instrumental in the win. He helped fuel the second-half rally with his defense and passing.

“Just energy,” said Hamper, who had four assists. “We had to dig down and follow our tendencies. Winters Grady is a hell of a player, but we weren't going to let that be the defining moment of beating us. Rebounding was killing us in the first half, so we all came together and said, 'We're going to rebound, move the ball, be unselfish and get this win.'”

West Linn bounced back after getting outrebounded 23-7 in the first half.

“We were just getting outworked. It really wasn't up to our standards,” Viuhkola said. “That was our big emphasis in the second half.”

Lake Oswego led 42-30 at half and was ahead 50-41 late in the third quarter when West Linn made its move. The Lions outscored the Lakers 16-2 in the final three minutes of the third quarter to pull ahead 57-52.

The Oregon-bound Shelstad had eight points in the surge, including two three-pointers and a steal-and-score that finished off the quarter. He had 15 points in the second half.

“When we get into our flow, we're tough to beat, especially with Jackson,” West Linn coach Eric Viuhkola said of Shelstad, who is averaging 27.2 points this season.

It was a total reversal from the first half.

“The first half, we were settling a lot, including me,” Shelstad said. “We just came out aggressive in the second half, getting paint touches. That's what Coach V told us to do at halftime, just be the tougher team.”

West Linn built the lead to 64-54 with 5:19 left. The Lakers got no closer than five points down the stretch.

It was a disappointing result for Lake Oswego, which beat Tualatin 63-61 on Tuesday and was eager to avenge an 80-77 loss at West Linn on Jan. 12. Despite the impressive first half, the Lakers were unable to maintain their effort.

“Clearly we're not ready for that kind of moment where we need to sustain it for a full game, from ahead,” Lake Oswego coach Marshall Cho said. “So we'll learn from that. We got away from a lot of the stuff we did well, especially on the defensive end.”

The game also was a learning experience for Grady, who is averaging a team-high 16.2 points this season. After making 10 of 16 shots in the first half, he finished 12 of 22, including 3 of 7 from three-point range. He had 10 rebounds.

“You see his potential on the offensive end,” Cho said of Grady. “We've just got to make sure that we've got a second option for him when they take away the spots he was scoring on. That's part of his process. He'll get there. Glad he's on our side.”

The return of the 6-3 Hamper bolsters the Lions for the stretch run.

“Even though he didn't have a great game for him – you can tell he's still winded – he's huge for us,” Eric Viuhkola said. “He's a winner, and he's a great passer. And when you play with a guy like that, it gets contagious, and other guys become better passers and better cutters.”

Hamper, a standout receiver and defensive back on the football team, said he lost 20 pounds from being ill.

“I wasn't going to play this game, but I felt good in practice,” he said. “I played way more than I expected. My mom's going to be mad.”