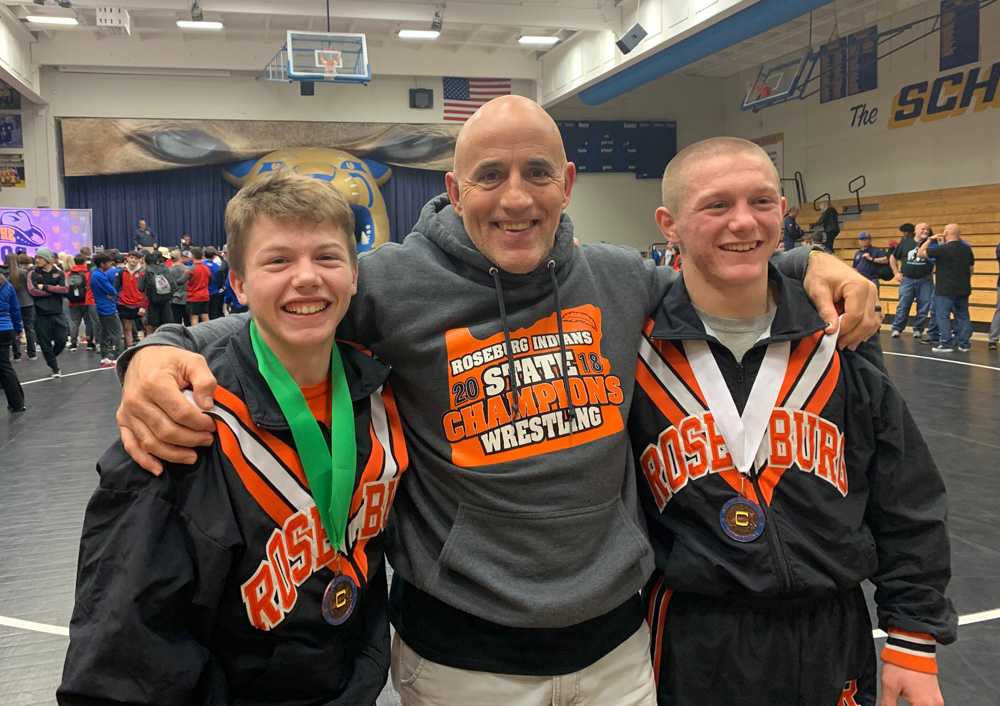 When Roseburg sophomore Gage Singleton (106 pounds) and senior Nash Singleton (132) won titles two weekends ago at the Reser’s Tournament of Champions, they became the first brothers in the 20-year history of the event to win their divisions in the same year.

Not only that, Gage pinned his way through his weight class, while Nash was named the tournament’s Most Outstanding Wrestler after edging 5A state champion DJ Gillett, 6-5, in the 132-pound final. The duo is 65-5 combined this wrestling season. Neither has lost in-state.

The titles at Reser’s have the Singleton’s positioned to win state titles later this month. For Gage, it would be his second, after winning at 106 in the spring. For Nash, it would be title No. 3. After losing to three-time Newberg state champion Ayden Garver as a freshman at 113 pounds, Nash won at 120 as a sophomore and 132 his junior year. He has signed to wrestle at Oregon State.

“Nash would come up quick when discussing the ‘All Timers’ that I’ve had the pleasure to coach,” said Roseburg coach Steve Lander. “Nash is ultra-focused, disciplined, a great leader of our team and is outstanding in the classroom. I would not bet against Nash anywhere in the country. Nash is my guy until someone beats him.”

“Gage is very athletic, aggressive, very strong for his size and loves to dominate people,” Lander continued. “He gets pushed pretty hard by his brother. Both are willing to do extra work to reach their goals.”

The Singletons’ father, Doug, who wrestled and coached at Glide and now coaches in the Roseburg program, has had the greatest influence on Gage and Nash. He started them young, taught them everything he knew and proved that champions needn’t be cut from the same cloth, even with shared genetics.

“Nash is ultra-focused; Gage will talk, visit, be social and then pin you,” Lander said. “They both want the same results, but do go about it differently and yet go about it together. I think they are good for each other in that way.”

“The Singleton family has been very good for the Roseburg Wrestling Community,” added Lander. “They are so giving of their time to help others with anything needed, but especially wrestling. It’s very important to them!”

Smiths forge names for themselves

Banks’ fourth-ranked 4A squad is anchored by fraternal twins, Hunter Smith and Dylan Smith. The seniors each eclipsed 100 career wins this season.

Hunter won career match No. 100 earlier in the year, while Dylan captured his centennial victory on Friday. Both pinned opponents to reach that magical mark.

Hunter and Dylan are two-time state placers. Hunter finished second at 106 pounds as a sophomore and second again in the spring, this time at 120 pounds. Dylan was fifth in 2020 at 113 pounds and second last year at 126.

Both aspire to graduate as state champions. If they accomplish that, it would be quite the feat, as they will need to knock off opponents who defeated them in the finals last year, Sweet Home’s Jake Sieminski for Hunter and Stayton’s Mauro Michel for Dylan.

This week we debut another recurring category: unbeaten wrestlers.

We’ve been asking coaches to tell us about wrestlers with current winning streaks of 20 or more matches but received no responses. It’s tough to win that many in a row, especially with top wrestlers eager to take on not only the best of Oregon, but also the best from other states.

We learned after Reser’s that three of the 14 division winners left Liberty High School with perfect records intact. Two, Isaac Hampton and Charlie Evans, are from 6A powerhouse Newberg. Hampton is a sophomore who finished second to Gage Singleton at 106 last spring. He currently sits at 38-0 for the season. Evans is a two-time defending state champion (132 in 2020 and 152 in 2021) and is 37-0, his last loss coming at Reser’s his sophomore year.

The third unbeaten wrestler is junior Kolton Malone of Thurston. Malone (35-0) is neither a state champion nor did he win a single match last season, but he was the top seed at 138 pounds at Reser’s and upheld his seeding by edging Dylan Mann of La Pine, a defending state champion himself, 10-7, in the championship final.

Malone, you see, was denied a state championship as a freshman when he lost to Daschle Lamer of Crescent Valley in the 120-pound final. Lamer, a junior, is himself a two-time defending state champion. Malone was unable to wrestle last spring due to a shoulder injury but has been special this year, including a win over Garver, the three-time6A state champion from Newberg, at the Oregon Classic.

Malone will carry an 84-4 career mark into the post-season this year, in search of his first state title.

Drew Greco, a 145-pound senior wrestler from Rex Putnam, is working on a 20-match streak that began Dec. 8. Here’s an article about Greco we prepared two years ago: https://www.osaa.org/today/article/1463/view?title=Take+Five+with+%E2%80%A6+Putnam+grappler+Drew+Greco

Coaches: Do you have a wrestler carrying a current winning streak of 20 or more matches? Tell me by emailing [email protected]

In this new recurring category, we note those wrestlers who pinned opponents with 10 or fewer seconds remaining in a match.

Odds and ends…Newberg takes on Glencoe at home today in its final dual of the season. If the Tigers win, they will send out their seniors unbeaten over 91 meets in their four-year careers…Redmond coach Kris Davis was recently recognized as a regional winner of the Positive Coaching Alliance’s Double-Goal Coach Award. The award recognizes coaches who know only win but also aim to trach life lessons through sports…

La Grande was the only top team that did not compete at the Reser’s Tournament of Champions this year. Coach Klel Carson said that his Tigers love the Reser’s tournament, but the cancellation of the JV portion of the event, combined with no parental attendance until the semifinals, forced his Eastern Oregon team to switch to an Idaho event closer to home. “We love the Reser’s Tourney!” Carson said. “It's one of the greatest, if not the greatest, wrestling event in Oregon. It's just a long way to travel for my fans/parents not knowing for sure if these guys would make the semis or finals? I hated the idea of them getting a hotel room and not being able to watch their athletes wrestle. Plus my JV guys really needed matches. It's difficult for us to find JV matches in Eastern Oregon.”

Marty Reser opined after the ToC that La Grande would have wrestled competitively at Reser’s. The Tigers have eight returning state placers, including two-time champion Braden Carson, two-time finalist Joshua Collins and third-place finishers Kai Carson and Brysen Penaloza…On another note, Carson said that after 29 years of coaching, “It’s been a great year to have both of my boys, Kai and Braden, wrestling in a normal-ish season, traveling to tournaments and wrestling together in some very competitive events.”

Taft competed well for a small school at the girl's Valley Regional tournament on Saturday, one of four regional tournaments. Taft finished 5th out of 33 teams.  Four Tigers placed second to qualify for the state tournament: Julia Towers at 110 pounds, Ryan Sou at 115, Kadence James at 130 and Yaneli Hermosillo-Carrasco at 140.

In this recurring category, we asked high school coaches to tell us about wrestlers who rallied from deficits of six or more points to pin their opponents. We only have two submissions so far.

This and all others are recurring categories. If you have a wrestler who should be on any list, please let us known by contacting John Tawa at [email protected]

Legends of the fall

In this section, we list wrestlers recording pins this season in under 30 seconds.

In this section, we identify those wrestlers who have made commitments to wrestle in college.

If you are a high school varsity head coach and want to know how you can contribute to future Notebooks, contact John Tawa at [email protected]