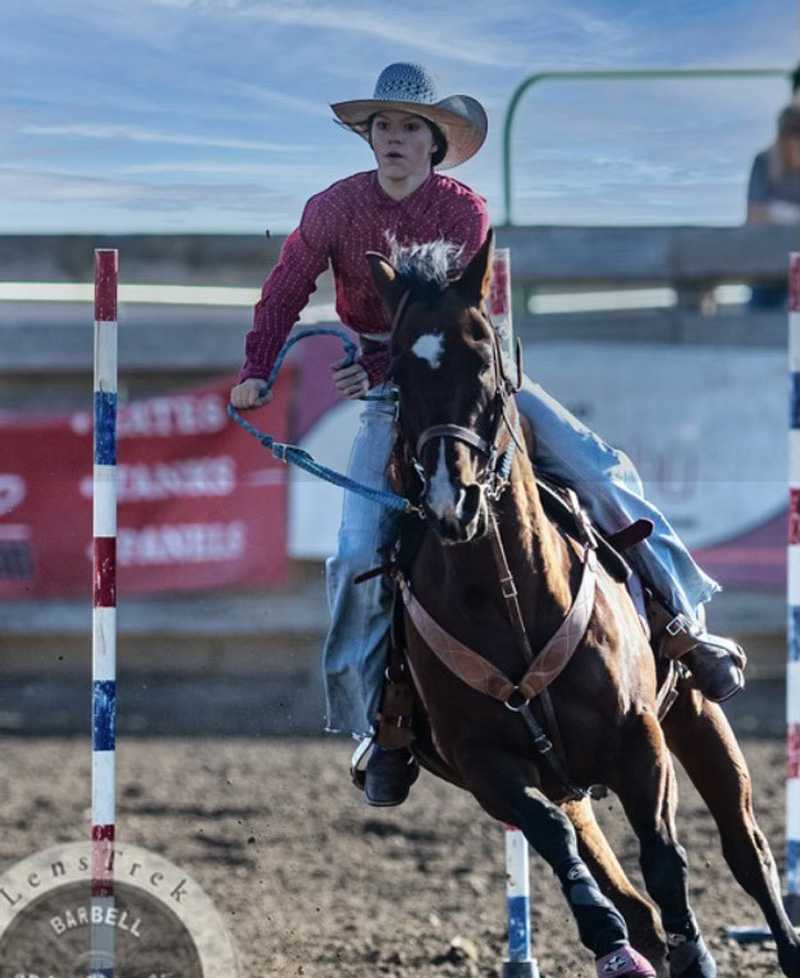 Hailey Lakin is a busy girl. A volleyball setter at Redmond High School, Lakin added wrestling and rodeo to her must-do list over the past 18 months. A great athlete with the drive to achieve, the sophomore got good at each very quickly.

Lakin was preparing for her freshman volleyball season in the summer of 2020 when her volleyball coach, an ex-wrestler, told her that wrestling might be a good fit for her.

The volleyball coach told Davis that Lakin was tough and had the ‘it” factor of mental toughness and grit. Together, they convinced Lakin to give wrestling a shot.

“I tried it and enjoyed it,” Lakin said. “I liked the environment and competitive side of it. It was fun to throw people around.”

At around the same time, Lakin was also turning her love of horses into a love of rodeo.

“I’ve been around horses my whole life but hadn’t had one of my own,” Lakin explained. “Finally, I got old enough to work and was able to afford my own horse. Rodeo came into the picture along with it.”

Lakin was smitten by rodeo because it was competitive and because of the unique relationship between horse and cowgirl.

As a wrestler, Lakin’s freshman year was a bit of a struggle as she learned the sport. She wrestled mostly boys and mostly lost. When she won, it was because of her abundant athletic ability. This year, as a sophomore, she took a huge step forward. Two weekends ago, at Districts, she qualified for the girls state tournament, which was a goal she’d set for the season. The third-place-clinching pin, which came via crossface cradle, improved her record to 25-12 on the year.

Lakin also made rapid improvement on the rodeo circuit. Competing in both Barrels (racing around three barrels placed in a cloverleaf pattern) and Poles (weaving through poles set up in a straight line), she cashed some checks and was in the running for trophy buckles.  Lakin said that she’s interested in expanding her rodeo skillset to Goats (ride down the arena, step off, flip and tie a leashed goat) and some steer roping events.

Davis said that Lakin’s work in rodeo helps when it comes to the mat.

“You’re on your own; you’ve got to figure it out,” he explained. “Hailey is one of those kids who understands competing and what you need to be successful. I count on her to dig down deep when she needs to and pull something out because she’s had that experience.”

“Both sports require you to react to movement and counteract it,” Lakin explained. “Both are mental sports, so you have to be mentally tough. You have to be able to picture how your match or run is going to go.”

Lakin has plans in rodeo that extend beyond her high school years. In addition to competing professionally, she hopes to train horses and younger cowboys and cowgirls. A strong student, she also aspires one day to be a large animal veterinarian.

Lakin hopes to continue in wrestling all four years even as her rodeo commitments increase. Davis said that he hopes she sticks with it. He knows he can’t have her for all meets and offseason training, but will readily make exceptions for her first love. With maturity and help from a tough wrestling room with good practice partners, Davis predicts that Lakin will turn into a state title threat in her final two years, even without the growth that comes from a single-minded offseason program.

Lakin’s next rodeo competition isn’t for three weeks, which means, for now, that wrestling and next weekend’s state tournament take front and center.

There’s a board of state placers in the wrestling room at Redmond. Lakin wants to be the first girl on the board. In order to do that, she’ll need to finish sixth or better in a field of 12.

“I don’t know who’s in the bracket but I like her chances,” Davis said. “I’m excited for her. I think she’s got a great opportunity to prove something.”

This morning, Lakin, who recently turned 16, was at the DMV testing to get her driver’s license. Being able to drive will mean being able to travel on her own to rodeo events outside of her area and the state. Maybe she’ll also drive to the state wrestling meet.

She’s had the drive her entire life; now she gets to take herself wherever she wants to go…