Dance: Stayton picks up a win in the 4A division
Tweet
The Highlights topped the five-team 4A division at Sprague in Week 5
March 2, 2022 by Danielle Schneider, OSAAtoday 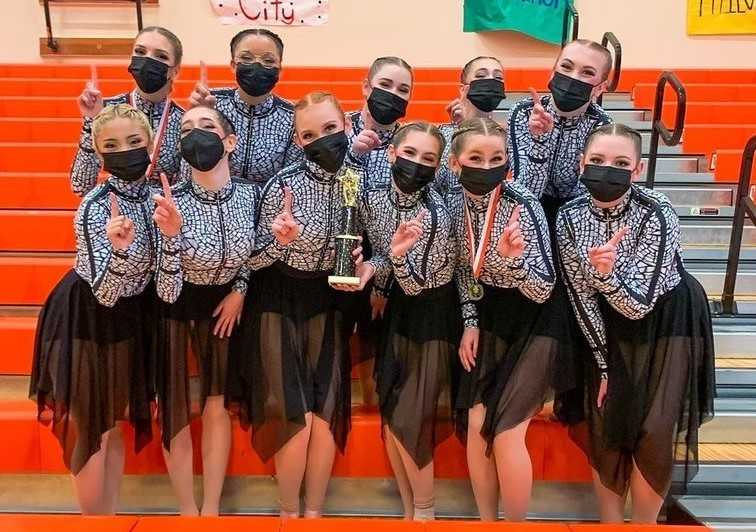 Highlight Leah Hill and her teammates earned first place in the 4A division for their performance of Kaleidoscope.

Teams from around the state traveled to Pendleton and Salem for competitions as the local dance competition schedule winds down.

Stayton earned first place (15.89) in the 4A division for its performance of “Kaleidoscope.”

Following the competition, Highlight Captain Leah Hill reflected on her team’s win: “The Sprague competition is something I look forward to every year. Spending the day watching and supporting so many teams was something I had missed over the past couple of years. Getting to end the day by taking home first place was the most rewarding feeling. We got to see our hard work pay off. Seeing my teammates faces light up when they announced our name is something I will never forget. I can’t wait to get back in the gym with my teammates and work hard over the next few weeks to achieve this feeling again!”

Performing for the home audience, the Sprague Olyannes earned first place in the Show Division (16.56).

In the high school team competition, Hermiston, which is a member of the Washington Interscholastic Activities Association, captured first place in the Show (16.96), Hip Hop (17.17), and Dance (18.33) divisions.

Grant Union finished second (15.89) in the Dance division with its performance of “The Bones.”