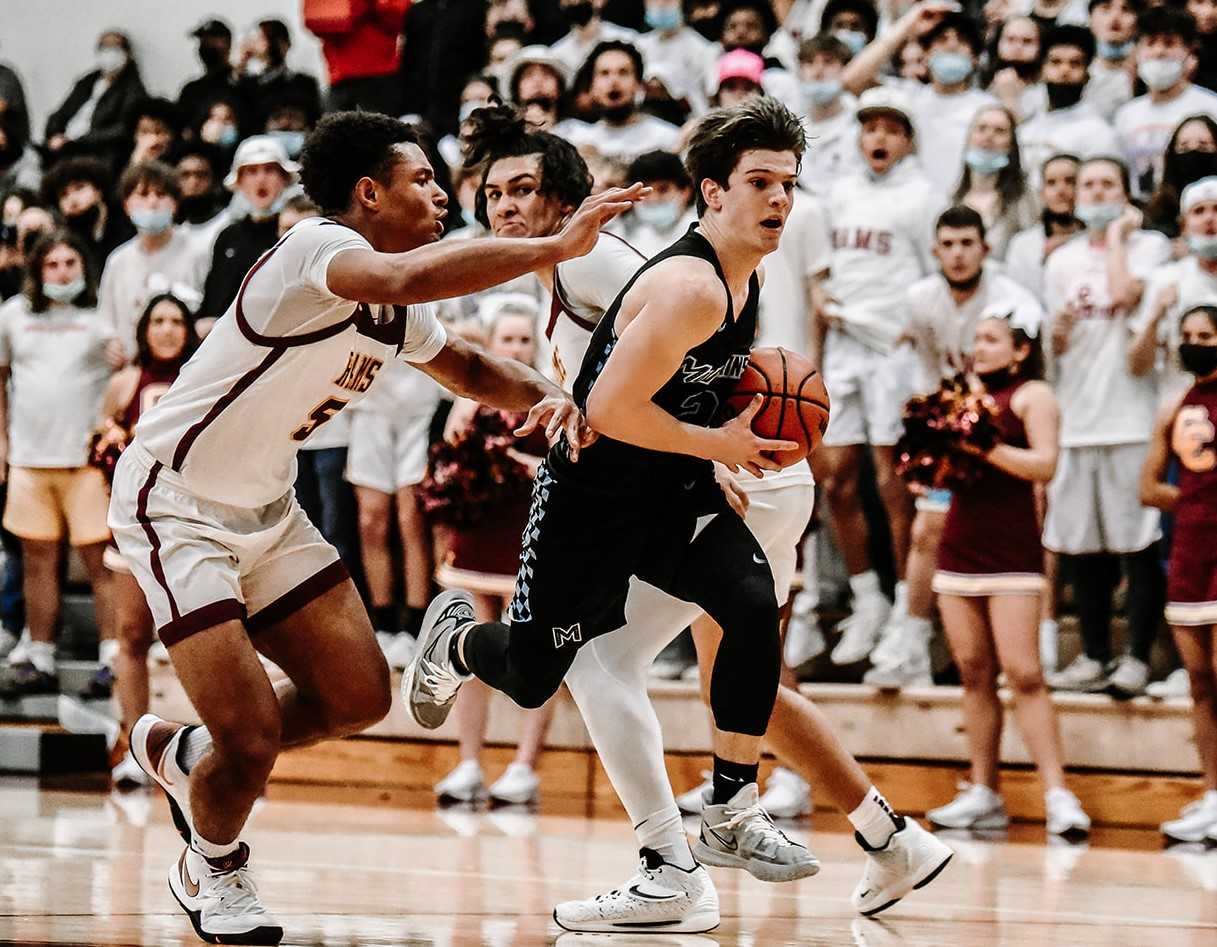 PORTLAND – It wasn't a perfect game, but it wasn't too far off for Mountainside in its 6A boys basketball playoff matchup at Central Catholic on Friday.

The 11th-seeded Mavericks were staggeringly efficient on offense – making 22 of 26 shots, 84.6 percent – to beat the No. 6 Rams 58-49 in the round of 16 and earn their first-ever trip to the 6A tournament in their fourth varsity season. They will meet No. 3 Cleveland in a quarterfinal Wednesday.

Mountainside (19-7) missed one shot in the second half, and converted the rebound into a basket, as it rallied from 10 points behind early in the third quarter to end Central Catholic's 20-game winning streak.

“It feels great to make history,” said Mavericks senior point Dimitri Cohen, who scored a game-high 15 points. “That's what we're trying to do for the school, make a winning program. And it starts now.”

Mountainside coach Dustin Hewitt praised his team's patience and discipline on offense. The Mavericks were nearly flawless in their execution, save for the four missed shots and nine turnovers.

“We really hammer shot selection,” Hewitt said. “Our guys have been progressively getting better and better at it. The players have to buy in, and that's tough to do, but these guys are doing it.”

The Mt. Hood Conference champion Rams made five three-pointers in the first half to lead 29-22. When freshman guard Isaac Carr opened the third quarter with a three-pointer, Central Catholic was up 32-22 and seemingly in control.

But Mountainside, which tied for second place in the Metro League, began to chip away. Boe scored on two spin moves – one of them a three-point play – to cut the lead to 35-31. Junior guard Blake Thune came off the bench to hit back-to-back three-pointers to put the Mavericks ahead 39-35.

“Big spark for us,” Cohen said of Thune's shots.

Holding the lead, Mountainside spread the court in the fourth quarter and made the Rams play chase. Boe bombed in a three-pointer from the corner and Baker converted a three-point play off a feed from sophomore Quinn Haveman as the lead grew to 51-40.

“We got stops on offense and made plays on offense,” Boe said. “It was one of the craziest games I've played.”

Boe's three-pointer provided an exclamation point on the surge.

“After I hit that, I was feeling pretty good,” Boe said. “And I had some good confidence to win that game.”

The 6-foot-3 Boe has come up big in the playoffs. The rookie had a team-high 19 points and six rebounds in a first-round win over Benson.

“I love playing with that kid,” Cohen said. “I mean, he's a freshman, and he's doing stuff that you don't see from seniors. He's got a bright future.”

But Cohen, who leads Mountainside in scoring with a 13.7 average, is the team's catalyst.

“It's his team,” Hewitt said. “He keeps us together even when he's not scoring or making assists. His composure and confidence on the court eases everyone else up, even me. It helps me coach.”

Mountainside came into the game expecting a physical battle against the big, burly and athletic Rams, who feature many of the same athletes who led Central Catholic to the 6A football title.

“Those guys, that's a team we have not seen yet,” Hewitt said.

The Mavericks struggled to keep the 6-4 Winston and 6-7 Williams off the boards all game, but when they picked up their on-ball pressure in the third quarter, they began to create turnovers and force ill-advised shots.

“I think we just decided that we've got 16 minutes left in the game, let's do what we did to get here, and that's pick up and get some ball pressure,” Hewitt said. “I felt like in the first half we were playing a little conservative. Second half, I think our ball pressure kind of frustrated them a little bit.”

The Rams committed six of their eight turnovers in the second half. After Carr's three-pointer early in the third quarter, they went seven minutes before making another basket.

“We got really stagnant in that third quarter,” Central Catholic coach David Blue said. “We just didn't take care of the ball. They pressured us pretty good. We sort of stalled, everybody standing around, waiting for something to happen.”

The Rams were unable to stop Mountainside's momentum.

“Mountainside is a talented, skilled team,” Blue said. “Once they got the lead, and the way Oregon basketball is with no shot clock, they put us in trouble with five guys that can handle and shoot. That was tough.”

The Mavericks will carry plenty of confidence into the state tournament.

“We're made for this because we played so many top-10, top-five teams in the state,” Cohen said. “We're ready for this. … We're just not done yet, so I'm really excited right now. We can do whatever, as long as we play our game.”