Girls basketball: Benson knocks out PIL rival Jefferson 64-62
Tweet
Malaya LeSueur scores 22 points as the Techsters hold off the rising Democrats and secure their spot in the 6A tournament
March 5, 2022 by Jerry Ulmer, OSAAtoday 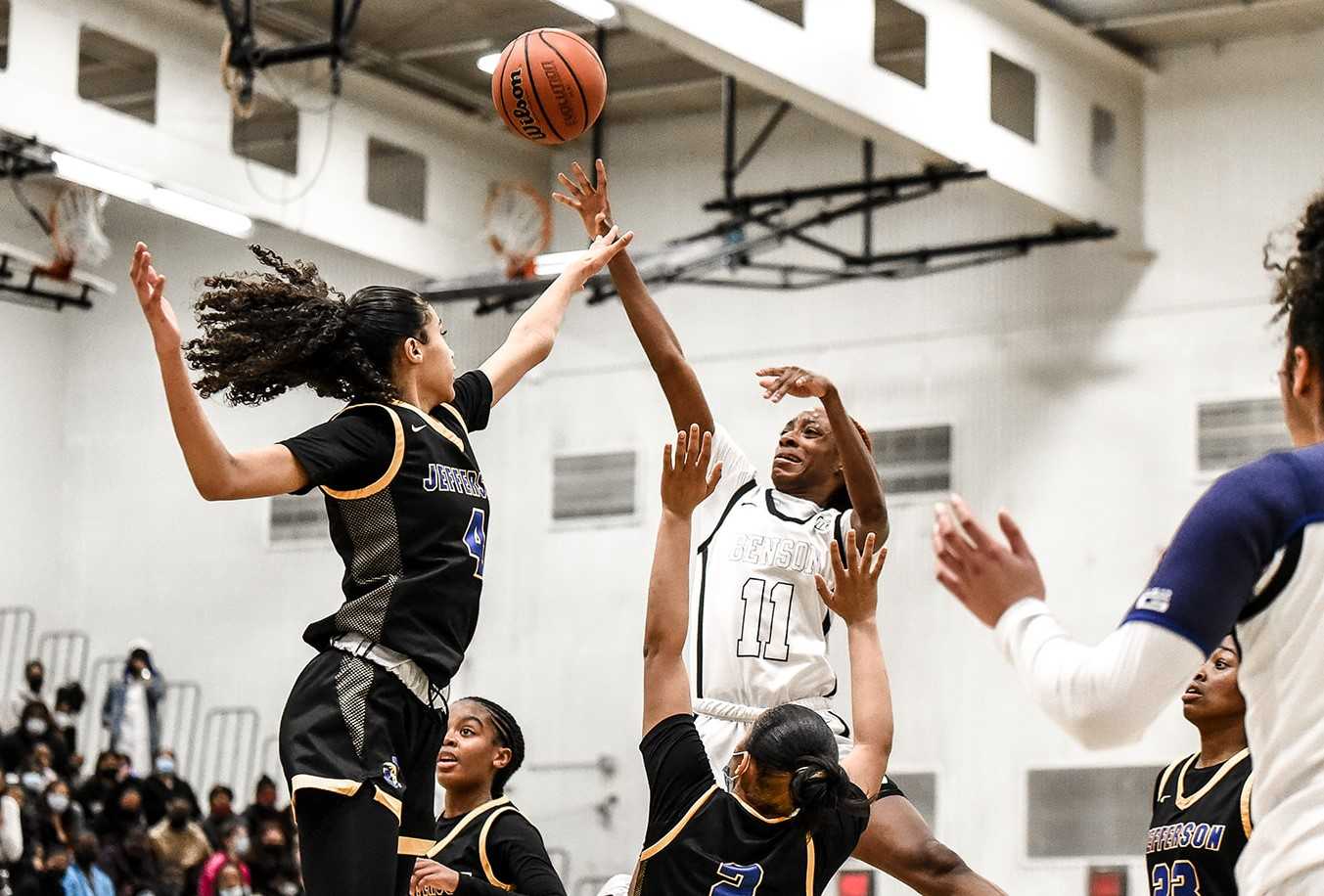 PORTLAND – Saturday's 6A playoff game between Benson and Jefferson made it clear that a great rivalry is brewing in Portland Interscholastic League girls basketball.

But for now, Benson continues to have the upper hand.

The league-champion Techsters shook off an early Jefferson flurry, pulled ahead by one point at half and led the rest of the way to beat the Democrats 64-62 and earn a berth in the eight-team 6A tournament next week at the Chiles Center.

Sophomore-dominated Benson (21-4) has won all three meetings against freshman-led Jefferson (17-9) this season, but the sixth-seeded Techsters needed every ounce of their experience to turn back the No. 11 Democrats in Saturday's game before a raucous crowd at the Marshall Campus.

“Playing them for the third time, this time it was probably a challenge,” Benson junior guard Malaya LeSueur said. “I'm glad that as a team we were able to pull through, we were able to finish.”

The 5-foot-9 LeSueur scored 19 of her game-high 22 points in the second half. Mahogany Chandler-Roberts, a 6-2 sophomore, added 18 points for the Techsters.

“It took us coming together as team, realizing that we're the older team, we're the mature team, and just taking over,” Chandler-Roberts said.

Benson coach Eric Knox credited his players for keeping their poise in the supercharged atmosphere.

“They're young, we're young. It was really about who was going to be most mature in the important moments throughout the game,” Knox said. “And we were in the most important parts of the game, and we prevailed.

“You've got 10th-graders against ninth-graders, so that little bit of experience helped. Today they showed their character, their poise.”

LeSueur liked how her team responded to the challenge.

“We were under pressure and in foul trouble a lot,” Le Sueur said. “I feel like we still controlled our emotions and we just stuck our heads into the game and just played it out. It was very hard to stay level and keep composure, but at the end of the day we pulled through and got the 'W'.”

Jefferson, which starts four freshmen and a sophomore, dropped the first two meetings to Benson 61-46 on Jan. 17 and 65-62 on Jan. 29. But the Democrats, riding a nine-game winning streak that included a 54-20 first-round playoff win over Bend, were eager to take another crack at the Techsters.

Jefferson caught fire in the first quarter during a 15-2 run that opened a 17-9 lead. Freshman Charisma Johnson made two three-pointers and freshman Abrianna Lawrence had seven points in the surge.

Benson began to settle down, though, by working the ball inside to Chandler-Roberts. She scored 11 points in the first half to put the Techsters ahead 27-26 at halftime.

The Democrats rushed shots as their lead faded.

“We're just young and we were moving too fast,” Jefferson coach Andre Lawrence said. “We didn't slow the ball when we were up. Just being young and wanting to play up-and-down basketball. You could tell they've been here before.'

LeSueur showed the way in the second half by scoring mostly on heady drives and free throws. She scored eight consecutive Benson points as the lead grew to 59-48 with 4:33 left in the game.

“Malaya LaSueur was amazing,” Knox said. “From her freshman year to who she has become as a junior has been amazing. She plays like a junior. She was big in the second half. She didn't hurry anything. … She did the things that we needed to create separation against Jefferson.”

The Democrats made a frantic final push. Sophomore Haley Webb made a three-pointer to draw them within 64-59 with 20 seconds left, and after a steal, sophomore Brooklyn Chatman hit a three-pointer to make it 64-62 with 12 seconds to go.

Benson threw a long inbound pass to 6-3 senior Tait Quinlan, who missed a layup with six seconds left, and Jefferson freshman Lelia Nunez rebounded. But the Democrats were out of timeouts, and Benson sophomore Olivia Hinck stole the ball away and held on as the clock ran out.

“It was a good thing that we got tested like that because it'll help us prepare for state, because there are going to be much more challenging teams,” Chandler-Roberts said.

Benson will make its first state tournament appearance since winning the 2019 title when it meets No. 3 South Medford in a quarterfinal March 5. The Techsters lost at home to South Medford 61-49 on Jan. 28.

“I feel like we're much better now,” LeSueur said. “Last time we played them, our energy was sort of low, but I feel like now that we're gaining more confidence, it's going to transfer over to the next game, and we'll do better.”

South Medford reached the semifinals in 2020 before the tournament was canceled and won the elite bracket of the Portland-area culminating week tournament last year.

“I think we've taken a step, but South Medford is a legendary program, and they've got a legendary coach,” said Knox, referring to the Panthers' Tom Cole. “I think we'll play better this time around when face them than we did about a month ago. They've been on top for the last couple of years, so they've got a lot of championship mettle.”

Knox credited Jefferson for its progress. The Democrats finished 2-22 in 2020 and were 7-10 last year.

“They remind me of my journey with this program,” Knox said. “They've got a great collective group of ninth-graders that are going to be a problem down the road.”

A Benson-Jefferson rivalry seems imminent in the coming seasons, but Andre Lawrence knows the Democrats have work to do. They haven't defeated Benson in seven seasons.

“We've got to beat them before it becomes a rivalry,” he said. “Right now they dominate us.”